When Schoolgirls Interact With Scientists

There are far too few occasions in an Indian student’s life where they are exposed to real scientists, much less, women scientists. 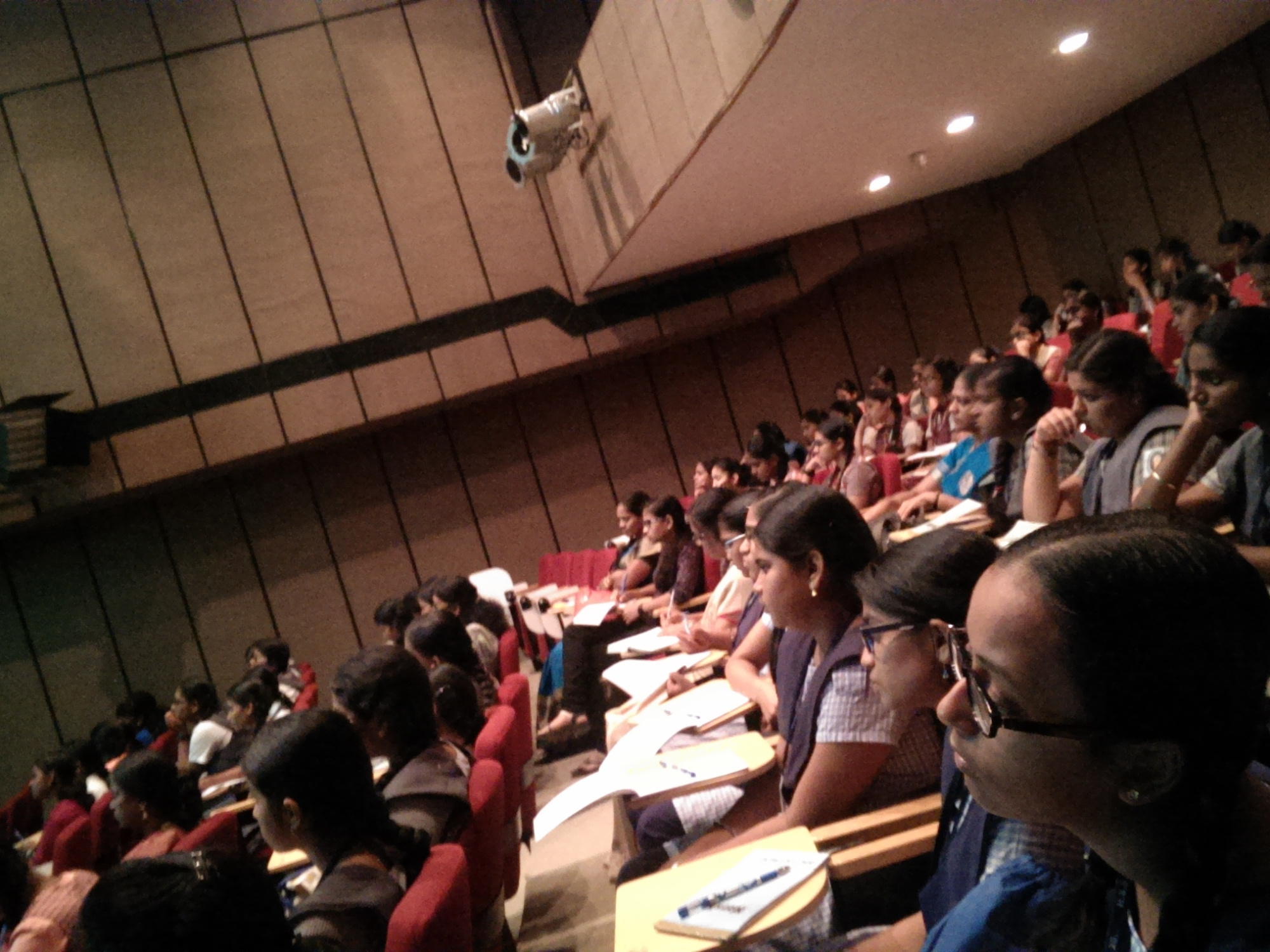 Schoolchildren aside, even the average adult would really struggle to name a female scientist working in this country. Credit: The Life of Science

“Can you name three Indian scientists for me?”

I was addressing about 80 energetic and boisterous school girls from class 8-12 and their teachers who had come along to chaperone them. It was February 11, the International Day for Women and Girls in Science. I had been invited by the Institute of Mathematical Sciences (IMSc, popularly known as MatScience) in Chennai to speak to these young students about some of the women Aashima and I have met in the course of The Life of Science project.

There are far too few occasions in an Indian student’s life where they are exposed to real scientists, much less, women scientists. That minute of cluelessness that followed my question reinforced the need for such interactions in Indian schools.

Kids aside, even the average adult would really struggle to name a female scientist working in this country. Nevertheless, it was quite telling that nobody in the audience – not students, nor the teachers – remembered and thought of yelling out the names of the speakers that had spoken minutes before me. Both were scientists – Dr. Manjari Bagchi, an astronomer and Dr. Varuni P. a biologist – and each had just spent thirty minutes talking about their research. 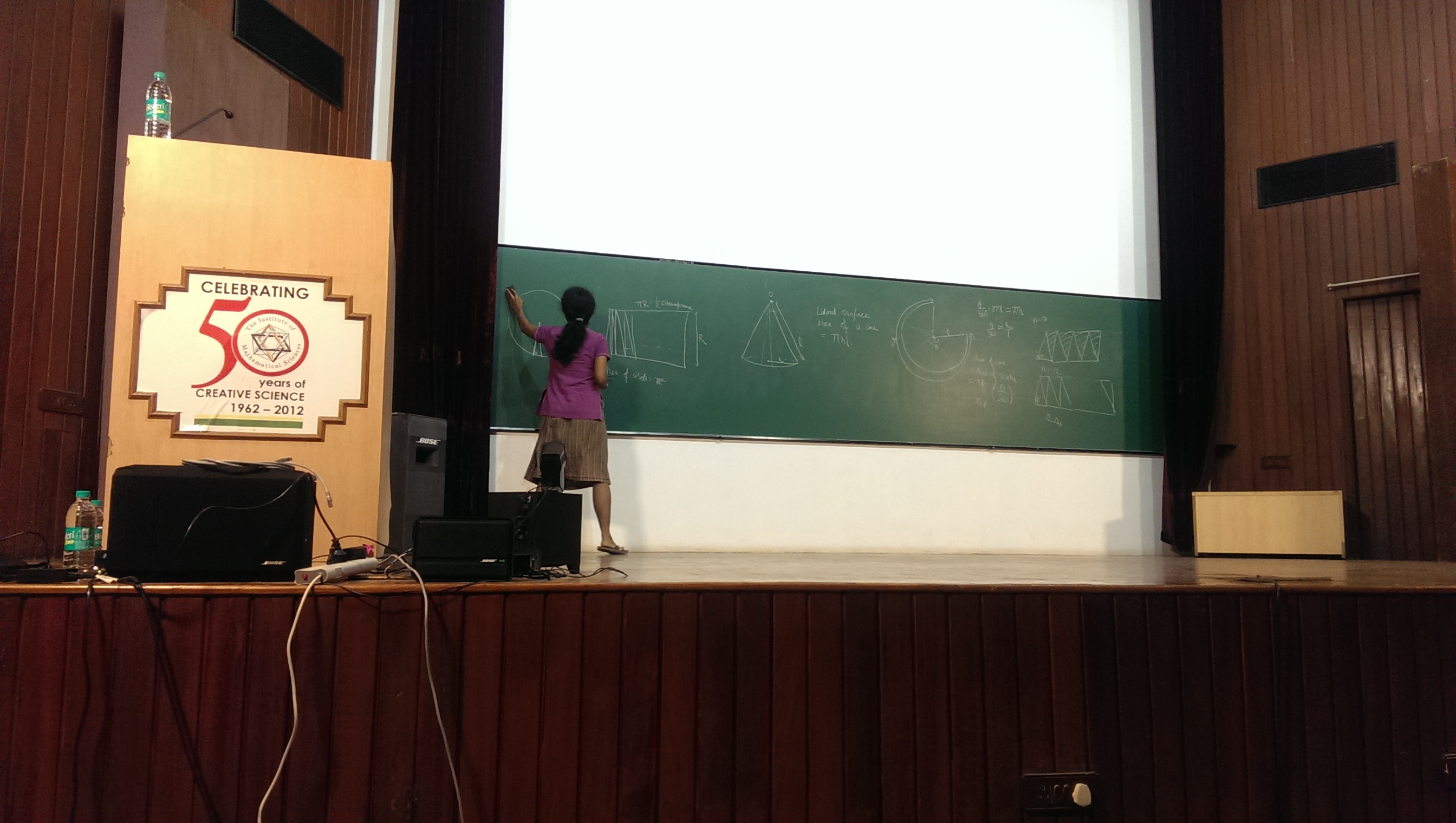 That’s how unfamiliar the idea of a ‘female scientist’ still is in our minds. The MatScience community is fortunately aware of this imbalance and hence jumped at the opportunity to host this event. “Girls need to first see themselves as scientists, see women as scientists,” stressed Dr. Ramanujam, a computer scientist at IMSc in an interaction with the school teachers later that day.

During the rest of my talk, I watched the girls lean forward in their seats as I told them the story of a neuroscientist called Vidita who is trying to understand emotions, an arachnologist named Elizabeth who goes looking for a special species of spider and a seismologist called Kusala who used an ancient poem to lead her to the site of a 1,000-year-old earthquake. Later, one of the kids came up to me and said this was the first time she enjoyed hearing about scientists. “Usually, it’s so boring.”

The MatScience community’s philosophy of science being something you do, not just read, remained the essence throughout the day’s events. It was evident when Dr. Varuni P. a postdoctoral researcher and outreach activities coordinator at MatScience engaged the students in a group activity. In a snap of a finger (literally), they found themselves demonstrating how bacterial cultures exponentially grow. There was more “doing” in the talk by Dr. Shweta Agarwal who studies cryptography at IIT-Madras. Agarwal summoned three young volunteers to demonstrate cryptographic techniques using the analogy of telling secrets.

Dr. Indumathi D. a particle physicist at the institute chose to talk about scientific discoveries instead of her domain of research. She narrated examples of accidental discoveries in the history of science and talked about how a scientific way of thinking has led men and women to draw amazing science from everyday experiences.

At an informal chat with teachers while the kids were busy “doing” science outside, Indumathi, who also had a stint as a high school physics teacher herself, made an impassioned plea to break out of some habits the Indian teaching system has fallen into. “In schools, there’s a very closed way of teaching science. It’s like we teach them 10% of the science in one class, 10% more in the next year and so on until by 10th standard, it’s like we’ve taught 100%.” In reality, pointed out Indu, science is much more open – “it’s about questioning and accepting that we will never know the ultimate truth.” She emphasised on the need to “discuss” science more in the classroom, like history or other humanities subjects would be.

Indumathi recalled how it was the math she did outside of syllabus that drew her to the subject first. “My teacher used to put up math puzzles on the board and invite anyone in the school to solve them. If we did, we were given a green star. The fact that I remember the colour of the star today itself shows what an impression it made on me!”

The whole second half of the day was dedicated to experimenting. The students were divided into groups, each guided by an IMSc PhD scholar. While some girls fiddled with Foldscopes, others learnt to untangle difficult knots, make origami, and solve famous math puzzles like the Konigsberg Bridge problem, which I was told by the IMSc student is a great primer to the complicated field of graph theory.

At the end of the evening, each school was given a copy of the wonderfully illustrated book by Rachel Ignotofsky Women in Science: 50 Fearless Pioneers Who Changed the World for their library.

Why a girls-only event?

I overheard organisers Varuni and Ramanujam talking about one school that was displeased with the idea of restricting participation to girls. At first, I was also doubtful of this arrangement – the speakers were all women, so isn’t it equally important to expose boys to see women scientists as it is for girls? Later, however, I realised that for girls who generally lead more sheltered lives  than boys, girls-only events can enhance their confidence and participation. There are still schools and colleges in Chennai that still insist on boys sitting separately from girls. Mingling between genders is not encouraged and often explicitly discouraged. In such a scenario,  the approach of inviting only girl students for this programme may have paid off. The level of participation was was very impressive and the girls enjoyed the freedom of being outside school, a safe space for their wisecracks, right and wrong answers and the experience doing and talking science with scientists.