Nine students were jailed for staging a road blockade as part of a student agitation demanding the reopening of educational institutions and waiver of student fees. 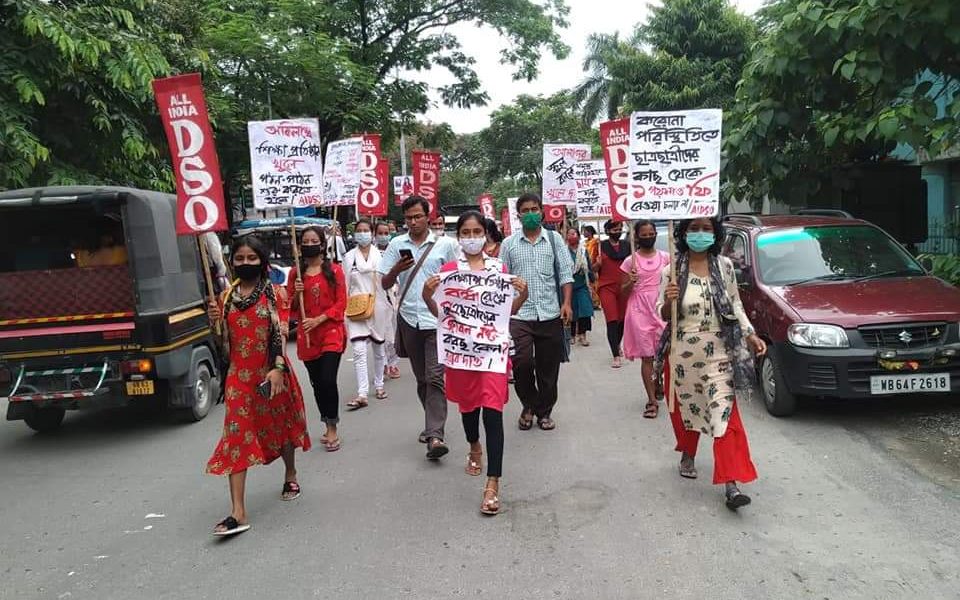 A scene from the DSO statewide agitation on July 26. Photo: By arrangement

Kolkata: Ananya Gope, a graduation final year student of Christian College in the Bankura district of West Bengal, has her exams from August 2. As of July 30, she was in jail.

Arrested on July 26 for staging a road blockade as part of a student agitation demanding the reopening of educational institutions and waiver of student fees, Gope has been booked, along with eight other college and university students, under several non-bailable sections of the Indian Penal Code (IPC) and the Disaster Management Act (DMA). Two more student activists who have graduated this year are behind the bars as well.

“My daughter did no wrong. She voiced the concerns of the greater student population. She was demonstrating for the benefit of the entire student community and I support each of their demands. It’s shameful that the government, instead of listening to the students’ demands, booked them under non-bailable sections and kept them in jail just ahead of their exams,” said Tarashankar Gope, Ananya’s father, a farmer and private tutor living in the remote Ranibandh area of Bankura district.

“Mamata Banerjee accuses the BJP of using the police and Central agencies to crush dissent and criticism. What’s her government doing?” he asked.

Gope and the other student activists are all part of a left-wing students’ organisation, the Democratic Students’ Organisation (DSO). The organisation had called for a statewide agitation on July 26 to press for these demands. They were also protesting the recent fiasco in higher secondary results that has landed the West Bengal Council of Higher Secondary Education in a spot of embarrassment.

Since then, the organisation has organised several other demonstrations in different parts of the state, including Kolkata, protesting the arrest of the students and demanding their immediate release. 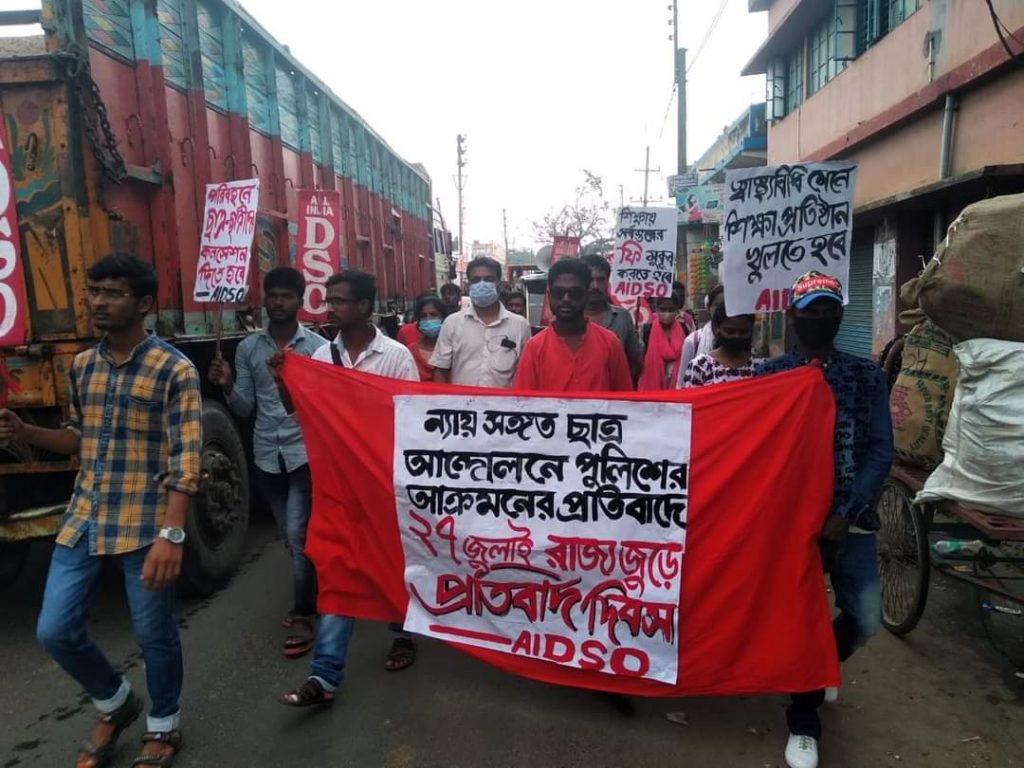 A DSO protest rally on July 27, a day after the arrests. Photo: By arrangement

According to DSO leaders, the closure of schools for a long period has resulted in many students dropping out to do odd jobs. The organisation’s leaders said that they apprehend a good number of students who have got engaged in work to assist the family in times of economic distress would not return to the schools if they were opened even later.

“We want to ask the chief minister, what kind of a government jails students for staging a protest on the students’ genuine issues?” asked DSO state unit leader Sourav Ghosh.

He added that on that day, at Keranibandh area in Bankura district, the police had resorted to lathi charge to remove the agitators from the demonstration site and later jailed them.

West Bengal has extended pandemic-related restrictions on activities and movements till August 15. Local trains are yet to resume, so are buses in most of the routes. The government has given no indication of when they might allow opening the schools.

Notably, the students have been booked under section 51 of the DMA, which the Tripura police recently applied on a group of surveyors from the TMC’s political consultant Prashant Kishor’s organisation, Indian Political Action Committee (I-PAC). The TMC strongly criticised this move, sent in a delegation of ministers and MPs to the state and called the Tripura police’s action as undemocratic.

No senior police officer from the Bankura district agreed to comment on the arrests.

State education minister Bratya Basu, who recently went to Tripura to stand by the detained I-PAC surveyors and took potshots at the state’s BJP government for trying to stifle voices of opposition, could not be contacted over the phone for comments on the arrest of students in West Bengal.

The story will be updated as and when a response is received from Basu.

Meanwhile, the Association for Protection of Democratic Rights, the state’s largest rights organisation, issued a statement on Friday condemning the arrests and demanding immediate release.

“We are demanding exemplary punishment for the policemen involved in this inhumane behaviour with the students,” APDR general secretary Dhiraj Sengupta wrote in a statement.