We Need to Teach Our Children About the Indian Constitution

If school curricula can have separate textbooks on Mahabharata and Ramayana, why can’t there be a small Constitution booklet, which is simple enough for everyone to understand? Tanya Jha
Education
Rights
26/Nov/2018
New Delhi: Two days before the 69th anniversary of the adoption of the Indian Constitution, We, The People Abhiyan organised an event for senior leadership from educational institutions to discuss how the Constitution can be raised to wider awareness.

The event kicked off with actor Lushin Dubey reading from the Constituent Assembly debates that took place between 1946 and 1949. Her pauses, pitch variation and theatrical gestures brought alive the debates around citizenship, secularism, women’s reservation, minority rights and hero worship, persuading the audience to reflect on the origins of our constitutional values. It was especially significant at a time when politics appears to have become profoundly polarised and threateningly divisive. 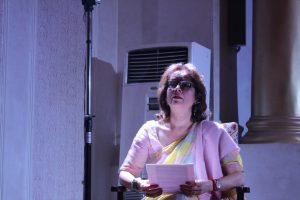 The audience were encouraged to think on questions like: ‘Whose rights are we concerned about?’. S.N. Sahu, joint secretary of the Rajya Sabha, spoke at length about creating more accessible and simplified literature on the Constitution to increase awareness among citizens about rights.

Adding to this, historian Sohail Hashmi said: “The constitutional framework is only based on the idea of treating everyone equally. There is nothing beyond this. We just need to understand this one simple thing.”

Also read: The Constitution as a Living Document

In general, the Constitution is merely treated as an oath-taking relic in parliament or just a goulash of complicated terms in school textbooks. The post-event discussion centered around how school textbooks have largely neglected important constituent assembly debates.

While there are textbooks that inform students about the drafting process, they are largely limited to class XI and XII humanities students. The content of these textbooks is also often manipulated by the ruling regime. 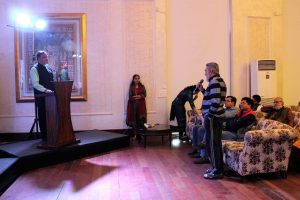 Audience discuss about relevance of the Constitution in present times with S.N. Sahu. Credit: Namitha B.

For instance, there are countless examples of textbooks praising government policies and posing questions with a majoritarian slant. Arguably, this has distracted students from addressing critical questions about how the Constitution was drafted; what were the major debates thrown up by the exercise and how they were tackled by legislators.

In December 2001, Delhi’s Historians Group compiled a report titled Communalisation of Education condemning the ‘saffronisation’ of NCERT textbooks by removing critical sections on the varna system. Similarly, in 2014, the BJP government released an order to remove Paash’s poetry in class XI Hindi textbooks, suspecting that they might encourage students to protest.

In June 2018, the Indian Express analysed over 182 NCERT textbooks from classes I to XII and discovered how government policies on Digital India, demonetisation and Swachh Bharat were positively described. The survey also revealed how the Congress party had updated the textbooks with their policies during their tenure.

Highlighting this, an editorial board member of NCERT discussed the nexus between education and politics, detailing how different regimes have updated the syllabus over the years to suit their agendas.

Apart from the manoeuvred content, as the members of We the People observed, the method of teaching is another factor that veils society’s harsh realities. Students are not encouraged to apply textbook theories in their lives, while classes on the Constitution are nothing but boring.

Organisations like We the People, Youth Collective, Vikas Samvad work towards filling this gap between teachers and students by conducting teachers’ training programmes – aimed to make comprehending the Constitution easy for all.

Speaking about the positive impact of We the People’s initiatives, members described students being able to get street lights and water-related problems fixed in their localities based on the knowledge derived from social science projects designed by the organisation. “This gives them a sense of empowerment and motivates them to understand the importance of the constitution,” said a project leader.

The drive to create awareness has also been thwarted at some schools where administrators were hesitant to make students aware of their own fundamental rights. The volunteers spoke about how they were asked not to discuss the Constitution with students for fear that it would distract them from their studies and prompt them to hold protests and morcha against political leaders. “All of this is part of a larger agenda to keep citizens in the dark and perhaps not let them exercise [the] freedoms guaranteed by the constitution,” added the project leader.

On November 25, 2016, Prime Minister Narendra Modi spoke about the need for school and college students to read aloud the preamble of the constitution to understand its real-life importance. But nothing concrete in this direction has been implemented thus far. On the contrary, several humanities courses that encourage healthy discussions are being shut down, ostensibly due to ‘fund-crunches’. Plus, there are several instances of school curriculum and exam patterns being marred by propaganda over the years.

Dr B.R. Ambedkar, in his speech at the constituent assembly, emphasised the importance of dissent in a healthy democracy and fearlessly admitted that this was not the final text and must be updated subsequently. “The Assembly has not only refrained from putting a seal of finality and infallibility upon this Constitution but has provided a most facile procedure for amending the constitution,” said B.R. Ambedkar.

The constitution was built upon ideas of dissent, critical thinking and the rejection of absolutism. These are the debates that need to be discussed in schools; not how good a government’s policies are. If the curriculum can have separate textbooks on Mahabharata and Ramayana, why can’t there be an introductory constitution booklet, simple enough for everyone to understand and be empowered by?

Tanya Jha is an editorial intern at The Wire.