Urgent Notes from a University in Crisis

Far from having learnt any lesson from the suicide of Rohith Vemula, the University of Hyderabad is institutionalising the use of excommunication as an administrative strategy 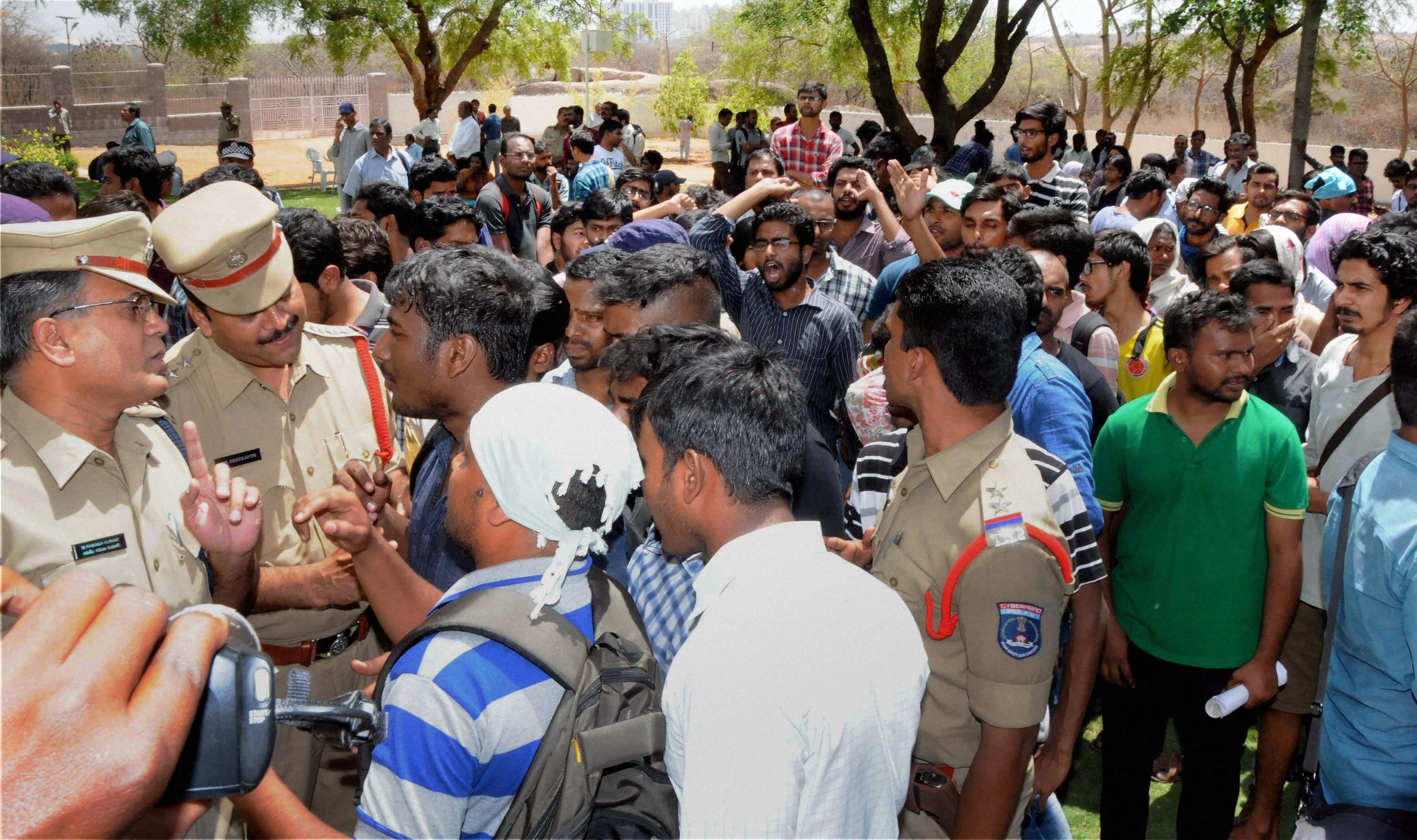 The events unfolding at the University of Hyderabad are extremely painful, to put it mildly. The sudden and silent entry of the vice chancellor, Podile Appa Rao, into the campus triggered a massive protest among the largest section of students. It also led to a clash between the Akhil Bharatiya Vidyarthi Parishad (ABVP) students and university administration on the one hand and the protesting students on the other. This was quite unexpected because the university had settled into an uneasy calm after the crisis triggered by the suicide of Rohith Vemula and the academic session was near closing for the year.

The first we saw of this was television news reports of brutal handling of students and the few teachers with them by lathi wielding police. After this there was just a repetition of this footage, and news that close to 30 students and three faculty members had been taken into custody. Drs Tathagatha Sengupta and K.Y. Ratnam were among those arrested. There were several eyewitness accounts of police beating up Dr. Ratnam even while he was trying to intervene and salvage a bad situation.

When the arrests were made I had assumed (rather naively, I must say) that all of them would be released after a few hours in custody. When they had been in for a night with no release in sight, I made contact with Karthik Bittu, a teacher there who was keeping close track of the arrested students and faculty. I sent a lawyer to Miyapur Police Station on March 23 to find out what was happening. From his and other accounts, the version I got was that there was no information on what the police’s next move was going to be and each one who asked got a different story of what was to happen. It was close to 5 pm, there were many lawyers and students waiting at the police station. When nothing seemed to move, I called Bittu again around 5 pm, and heard that they were planning to meet the chief justice. In the meanwhile, around 7 pm, my lawyer friend messaged me that the reason why the detainees were not being produced was that the remand case diaries were not ready. It was over 24 hours since the arrests had been made. So I messaged Bittu immediately conveying this information and suggesting that the team meeting the CJ bring this to his notice and demand immediate release. I do not know if they met him.

I had also requested a friend with access to ministers to intervene with the home minister and chief minister. He did meet the home minister, who expressed his inability to intervene; the CM was not contactable. Since I live at the other end of the city, I had requested a colleague to drop by at the campus and check on what we could do. We had received several appeals for food and water. Bottles would not serve any purpose if there was a cutting off of water supply. So we explored the possibility of arranging water tankers for students, but the heavy police presence and barricades led us to abandon that thought immediately. No vehicles were allowed to stop anywhere near the gate and no outsiders were permitted to enter.   But I understand that these arrangements were made and friends had been supplying food packets to the campus till late at night. And of course the students had been doing some mass cooking as well.

This morning, i.e., March 24, feeling very restless about having people in custody, I went to Miyapur police station. I received information in the morning that they were in Miyapur police station. When I arrived at Miyapur around 9.30 am, there were a couple of sentry and constables and the place was quiet. I called Bittu who informed me that it is always quiet but if I peep around at the back of the police station, they will be there – Bittu found them there in similar circumstances the previous night. So I got into a conversation, introduced myself, was offered a chair, and told that there was no one in custody in that police station. The Gachibowli PS (under whose jurisdiction the university comes) did not have adequate detention facilities and so kept the group in custody in Miyapur for “purposes of lock up and food.” They offered to take me around the police station if I wished. I declined and went to Miyapur court, where the bail applications were to be filed. After a long wait there, when there was no sign of anyone appearing on behalf of the arrested students and faculty, I left.

On my way back, I learnt that the group had been produced before the magistrate late at night on March 23 and were sent to judicial remand in Cherlapally jail. I further learnt that around 50 more students were going to be arrested and the FIRs were ready – but I do not know this for a fact. This evening, i.e. Thursday, we learnt that the bail hearing has been postponed to Monday, so the group will stay in judicial custody till Monday. One full week in custody, for what reason?

What is most disconcerting about this entire sequence of events is the total blocking of information on arrests by the university administration and its callous disregard for the fact that its own students and faculty had been placed under arrest. And that those that remained were being put through enormous hardship with no electricity, no water, no food. I called a friend who is on the faculty and asked why the entire faculty had not risen in one voice against the arrests. We can have disagreements and political differences, but there can be no equivocation regarding persons who have been beaten up by the police and placed under illegal detention; and misinformation about the whereabouts of those detained. This is in clear violation of basic principles of criminal law, but I was shocked at the response I received: “No, there is a lot of misinformation by the media; everything is working well on campus.” What about the arrests and police violence? “There was an ‘attempt to murder’ the vice chancellor.   Senior faculty witnessed it.” Really? I asked. Attempt to murder? That is nowhere in the allegations or the charges as far as I know. What actions amount to attempt to murder? And whatever it was, were 30 people directly responsible? How did you sift the ABVP students out of those arrested, since all accounts say that the scuffle involved both groups? Did 200 need to be brutally beaten up? Were any ABVP students hurt by police lathis? Do you need to choke off supplies for the rest? No answers. So I made my position clear. Even if ABVP students had been beaten by the police in this manner and arrested I would oppose it strongly and insist that you oppose it too.

Let us set everything else aside for a moment. How did the vice chancellor, his administration and his colleagues (a substantial number with him) even permit the police to exercise disproportionate force against unarmed students? And how are we to understand their complacency in the face of having their own students and faculty in custody?

From a situation where five students – Rohith was one of them – were subjected to an official boycott and moved into a symbolic velivada, or ghetto, in protest, we are now witnessing excommunication – the velivada – as administrative strategy for institutional governance. What we see unfolding before us is the Salwa Judum as a method of governance. Our history of caste violence has certainly taught lessons in the most unexpected ways. But the resistance by students is immense. And considering they have only their courage in their hands and the will to resist, it will be a long and hard battle against a vengeful, biased and cruel administration that enjoys the guarantee of impunity.