Why the University and Its Questions Worry the State

Citizenship, defined by the state, is conforming and passive. 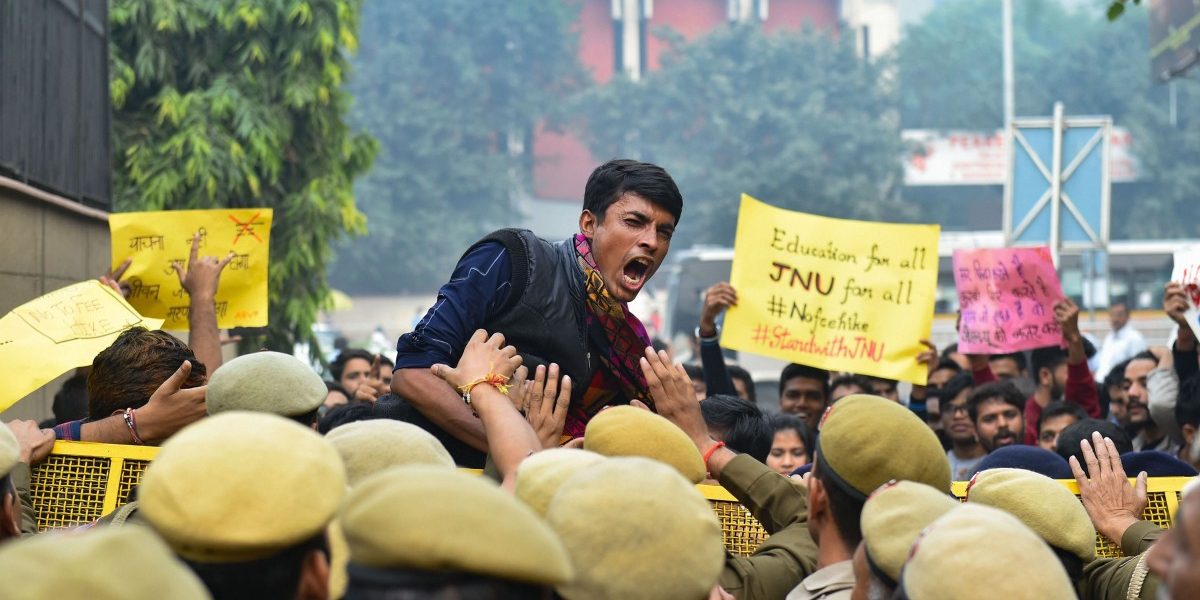 Police stop JNU students who were staging a protest over hostel fee hike outside the UGC office at ITO in New Delhi, on Wednesday, November 13, 2019. Photo: PTI

Rising tuition fees, erosion of subsidies, over-regulation, systematic vigilante violence against curricula, moral policing – often endorsed by those in power and their fringe elements – and now, in an extraordinary event unsurpassed in our cultural memory, paramilitary forces on campuses, signal an overt, or not-so-overt, war against universities and higher education institutions (HEI).

Add to this already incendiary mix, the race for global stature and internationalisation – in itself, not at all bad for any HEI – and it is no small wonder that there is hardly any breathing space to learn.

But why is there this fear around the university? What is it about universities and its multi-hued ethos that worries the state? Why, alongside protecting the nation’s borders from invasion, does a state feel compelled to police universities, regulate its inhabitants, straitjacket them, pressurise them into conformism, or produce a particular kind of labour for nations with a high index of “ease of doing business”?

Those are questions, and the Question is the subject here.

A state’s war on universities is, as noted in these columns before, a war on the language within a university (short-hand for discourses, forms of critical thinking) and a war on freedom. A curriculum and pedagogy, especially in liberal arts, that focuses on ideas of freedom, dissent, equality and social justice and which thereby interrogates inherited cultural practices promotes entirely different ideas of teleology, human society and values.

When, for instance, one reads Fanon undermining the very idea of humanism’s “universality” (“universal” man is white, male) and linkage to imperialism or Ambedkar noting the discrepancy in the freedom movement’s emphasis on political reform without social reform, it gives us a history of questioning. When Stephen Greenblatt shows how Shakespeare’s texts gesture at the tyranny of a monarch, he effectively gets us to understand that Shakespeare is asking: how does tyranny operate? And why do we tolerate it?

Also read: JNU Students: You Are Our Only Hope

When the liberal arts and social sciences education and pedagogy define society in terms of power struggles that are “naturalised” as god-given or “always this way”, they essentially question how several people have been excluded from the category of the human: how was “humanity” constructed to exclude, at various points in its history, women, Catholics, gypsies, Muslims, brown-/black-yellow skinned races, Jews, mentally disadvantaged?

What were the systems of thought and supporting social practices, such as colonialism or patriarchy, that enabled social orders to exclude some? To unpack a literary or cultural text’s subtextual, unvoiced questions in this fashion is the task of the university.

The attention to structures of power in pedagogy and research within a university (and within that, the humanities) means the university is the place of the Question:

[The university] demands and ought to be granted in principle, besides what is called academic freedom, an unconditional freedom to question and to assert, or even, going still further, the right to say publicly all that is required by research, knowledge, and thought concerning the truth.

everything that concerns the question and the history of truth, in its relation to the question of man, of what is proper to man, of human rights, of crimes against humanity, and so forth… to pose all the deconstructive questions that are called for on the subject of man, of sovereignty, of the right to say everything, therefore of literature and democracy, of the worldwideization under way, of its techno-economic and confessional aspects, and so forth…

So writes a philosopher in The University Without Condition. But why is this function, of questioning, foundational to a university?

The Question, in form and content, tenor and resonance, in the university is what drives its profession. To “profess”, notes this same philosopher,

Of Latin origin … to “profess” means, in French as in English, to declare openly, to declare publicly … To profess is to make a pledge [gage] while committing one’s responsibility.

This is the key argument: the Question in and from the university is a profession, a public act of professing. It addresses the public (demos) that makes up a democracy. All questions, in short, from and of the university, whether on dress codes or moral policing, are questions for and to the public of a nation.

Also read: The War on Language in Universities is a War on Freedom

A university may not have all the answers, but that does not stop it from asking questions. This is what worries the state: the incessant questioning, the state of constant vigilance by the future citizens. Students who ask these questions of the state and the status quo are not the citizens the state wants.

Citizenship, defined by the state as conforming and passive – “disciplined”, to use an old word – is, therefore, unquestioning. To ask questions is to diversify thought, to abandon one line of thinking for another, sometimes just for the heck of it, to see where it leads. 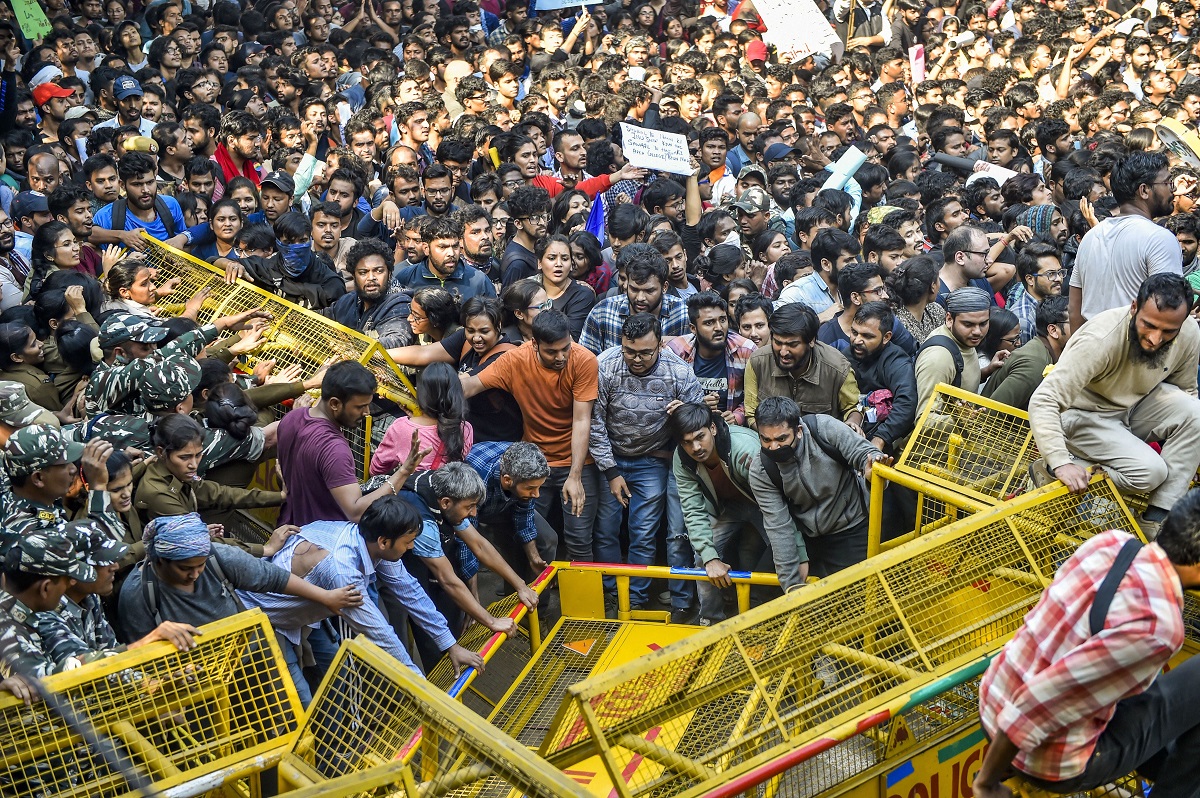 But, of course, even as we plead for the sovereignty of the university when freedoms are at stake does not mean the university itself is beyond question: “The university should thus also be the place in which nothing is beyond the question … not even the traditional idea of critique” or even the idea of a university, says this much-quoted philosopher.

And here we see the tables being turned in the form of the state asking questions of the university: What is being done in the university? What do the liberal arts actually do?

A history of this (questioning backlash) on the role of the university may be found in the US. We saw this in the work of Allan Bloom’s attack on counter-culture in The Closing of the American Mind and the anti-intellectualism – mostly translated as anti-liberal arts! – in the wake of Bloom.

There is, as a commentator noted in 2017 about American neo-conservative criticism of American campus political culture, a “hostile” way of talking about universities. Just as moral relativism and a liberal questioning outlook on life-issues as diverse as sexuality or religious identity worried Bloom, it does every present-day government that believes in monolithic cultures and unitary origin myths.

This pluralism, that drives discovery (of the self, of identity, of viewpoints) is what worries the state. Indeed, Heather Mac Donald’s controversial book, The Diversity Delusion: How Race and Gender Pandering Corrupt the University and Undermine Our Culture (2018) made the preposterous argument against diversity within the American system. It would be good to revisit, in the light of curbs on hostel-visits and imposition of curfew-hours, Mac Donald’s diatribe:

Students in the 1960s demanded that college administrators stop setting rules for fraternization. “We’re adults,” the students shouted. “We can manage our own lives. If we want to have members of the opposite sex in our rooms at any hour of the day or night, that’s our right.” The colleges meekly complied and opened a Pandora’s box of boorish behavior that gets cruder each year. Do the boys, riding the testosterone wave, act thuggishly toward the girls? Yes! Do the girls try to match their insensitivity? Indisputably.

One does not dispute nor condone the pernicious impact of drugs and alcohol or related violence, on the minds and behaviour of student populations. Yet Mac Donald’s assumption that the resultant ‘less-than-romantic… encounters’ are ‘transformed into rape’ is surely hyperbolic. Is this quasi-securitising mode of asking questions of the university a prelude to policing and strangling diversity? The answer, as responses to Mac Donald indicate, is “yes”.

But there are also other questions which universities must ask of themselves. We may look at just three sets for now.

With the announcement of “Eminence” as a goal for the Indian HEIs, the competition among them hots up further. Does this competition mean HEIs will up their game in terms of better pedagogic practices, better courses, programs and testing mechanisms – Avijit Pathak’s prescient commentaries on dated pedagogics are worth revisiting – updated knowledge being disseminated by teachers (a scandalous truism: once hired into secure jobs, a vast majority of Indian faculty do not upgrade their knowledge), and commitment to teaching? That is one set of questions.

Scholars in education studies such as Philip Altbach have pointed out that Indian academics publish a lot, but what they publish has little global visibility because of their poor quality. As Pushkar, citing Altbach and others, put it, ‘much of the “quantity” comes from “forced” research and publishing [also known as Academic Performance Indicators, or API]’. How does a university internally abandon quantity in favour of quality when it comes to evaluating publications?

In this API-driven scenarios, students represent only career-points and therefore are an ‘API-Human Resource’. If I may be pardoned for lapsing into the autobiographical, when at a faculty meeting deliberating ending the M.Phil program, a faculty member with nil publications piped up, “but then, how will I accumulate API?”, thus indicating that the student is seen only in terms of “quick APIs” if they are MPhil students, “slow APIs” if they are PhDs, to use the unpardonable nomenclature I heard recently.

Are students stepping stones to greater career heights for faculty, exercises in constituency-building for leverage within the university system, grist to the identity-politics mill or are they more than that? That is another set of questions.

Rather than the state asking what we do in the university, let us ask this of ourselves, even as we ask similar, disquieting questions of the state. Shall we?