The University: An Idea Under Siege

Only when our universities become the centre of consciousness and conscience, will we be equipped to realise the humane and noble aspirations envisioned by our nation's founding fathers.

Where words come out from the depth of truth
Where tireless striving stretches its arms towards perfection
Where the clear stream of reason has not lost its way
Into the dreary desert sand of dead habit.

The modern idea of the university as an institution encouraging research to be an essential complement to academic engagement with modes of knowledge originated in the first decade of the 19th century in Germany. The German educationist Wilhelm von Humboldt is considered as responsible for pioneering this concept of institution by establishing the University of Berlin in 1809, which subsequently served as a model for the European and Western universities of the time. As a consequence of Humboldt’s insistence that the university teaching ought to arise from independent and unbiased research, ideas about academic freedom became the core of modern universities. After this, intellectual freedom driven by humanistic ideals and sincere seeking of knowledge rooted in empiricism and rationality were to be the cornerstone of university education, in contrast to the earlier education that derived its authority from dogma and tradition.

Humboldt’s ideal remains a fixed template even today, despite the fact that technological developments and economic exigencies have kept shifting the structure of modern societies. When the professions of diplomacy, theology, law and medicine were considered important, these subjects were taught. As new professions developed, new subjects were added to the curriculum with the thrust moving towards specialisation. The fact, however, remains that the idea of the university is poised and keeps vacillating between an ideal and a practical goal.

In modern times, as the institution of university acquired a central role in society, paradoxically, it came to be affected more and more by economic and historical factors. The emergence of post-industrial middle class and liberal democracies in the 20th century brought about an unprecedented increase in the number of students and the shaping influence of the economics of supply-demand. Modern universities came to complement the welfare state in the post-World War II societies, where the egalitarian idea prevailed that all citizens should be provided equal opportunities and share in the nation’s resources. With state funds available, access to the university became easier and based on competitive merits. Again, within the shifting nature of societies, resulting in no small measure from the onslaught of population, industrialisation and technological revolution, the demand for the vocational and professional education gained the upper hand. Consequently, the university was transformed into a hub for training workforce for industries and offices. Research became profit-driven, catering to sectors like information technology, pharmaceuticals and weapons industry.

In the wake of globalisation, the new ‘mantra of progress and development’ did not leave the university untouched. The institution is called upon to measure its worth in terms of quantifiable economic indicators – subsuming its role under the rubric ‘contribution to society’. In modern industrialised states, with the emphasis on benefits for society, education’s purpose is perceived increasingly as entirely utilitarian. Ideological underpinnings are encouraged only in the service of dominant power structures. The immediate consequence has been the sounding of the death knell for subjects like philosophy, literature and history, as supposedly they serve no useful purpose in society. Since administration, management and governance became the new touchstones, both political philosophy and historical studies were looked upon as inimical, hence discouraged in the era of self-promoting histories and ersatz ideologies. However, with characteristic resilience, these discredited subjects began to reformulate themselves to contend with the new challenges they faced. For example, the discipline of Literary Studies reinvented itself with postcolonial theory, whose analytical tools were developed to expose ideological prejudices and underpinnings.

It may be affirmed that despite the continuing onslaught on its role and function, the university remains one of the most versatile and noble of human institutions. In the 21st century, one of the reasons why the university has assumed special significance is that, with the rise of literacy and easy accessibility to it in modern societies, more and more individuals are passing through its portals during the formative phase of their lives.

In India, we are constitutionally bound to inculcate ‘the scientific temper’ in ourselves, and duty bound by our national motto – Satyamev Jayate – to uphold and seek truth with our actions and words. These qualities and ideals have, in fact, always formed the guiding principles for the acquisition of knowledge, driving great minds to delve into the mysteries of nature so as to create more knowledge.

The fusion of science and humanities (essential so that the supposed conflict between ‘the two cultures’ vanishes) occurs as we cultivate in us ‘the scientific temper,’ that in turn must emerge from our deep-rooted dedication to rationality and a striving after truth – though the heavens may fall. (We owe at least that to truth-seekers like William Tyndale, Charles Darwin, and to so many others.) The worship of knowledge takes place only at the altar of truth. It is truth and only truth, as the Mundaka Upanishad, from which our motto derives, beautifully affirms, that widens the Devayanah (the path of the Devas, which symbolises human aspirations). Where else can we have a place to inculcate in individuals the scientific temper and an impassioned commitment to truth as the qualities to aspire after?

As in earlier times, universities developed from ideological concerns, and remained sites for the propagation and cultivation of certain ideologies. When these came into conflict with dominant power structures, suppression arrived swiftly and brutally. In modern times, the situation remains the same: different ideologies jostle for space and expression, yet in the democratic spirit of modern liberal societies, they do enjoy a relative freedom to articulate, debate and engage with rival ideas. 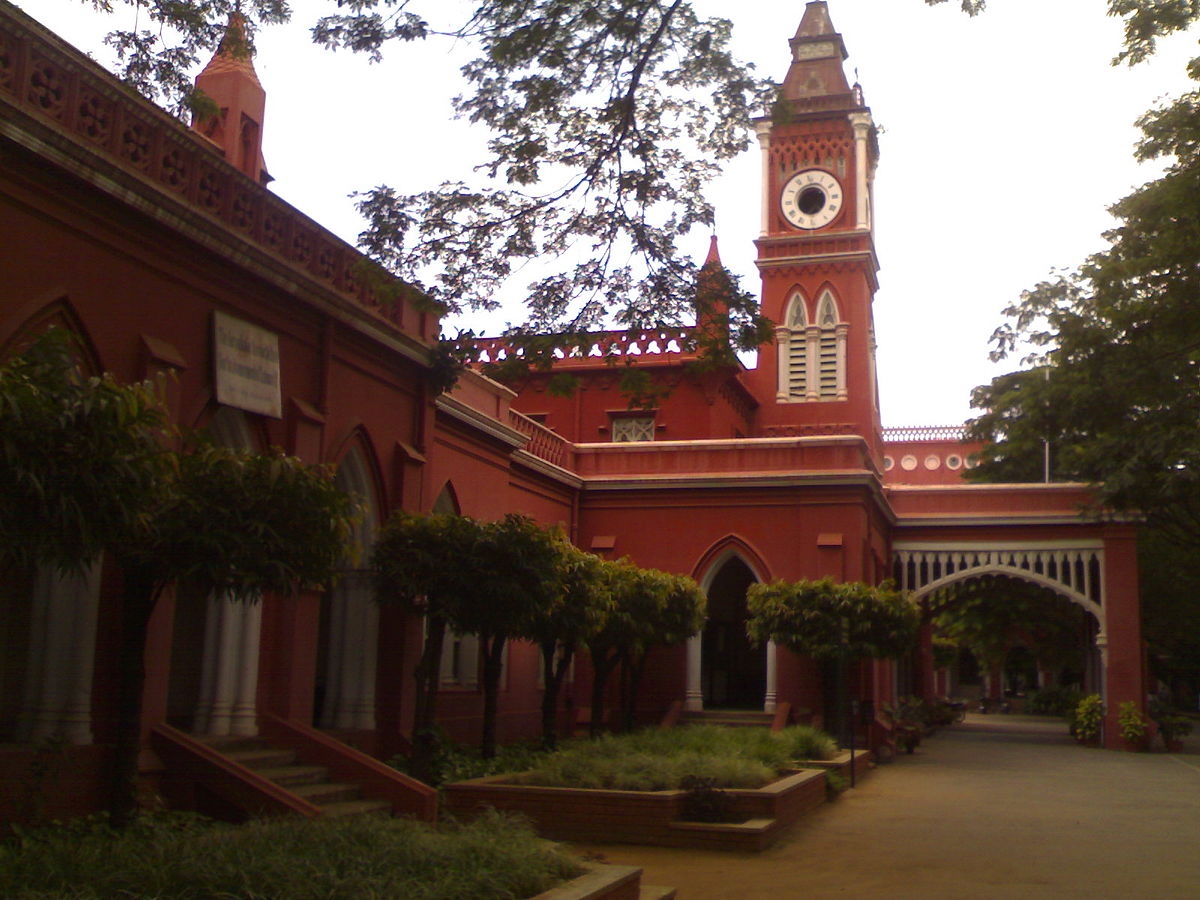 In the wake of globalisation, the new ‘mantra of progress and development’ did not leave the university untouched. Credit: Wikimedia

Taking one’s cue from Isaiah Berlin, one may differentiate between negative ideologies and positive ideologies. Negative ideologies seek to empower the privileged few at the expense and exclusion of others. Positive ideologies seek to empower all, and being inclusive take up issues of the deprived, the marginalised, and of those who are unjustly treated in society. The ideological goals do have material interests in sight as these can neither be ignored nor wished away. But an ethical framework is imperative, as bereft of values ideologies always remain in danger of turning into self-aggrandizing masks in the service of dominant groups. If one’s standards are set by moral values, like truthfulness, sincerity and sense of justice, ideologies fail to serve the ravenous monsters of greed and covetousness.

In a letter to his patron, the Prussian king Humboldt emphasised that the purpose of education and knowledge is to bring about ‘a certain cultivation of the mind and character that nobody can afford to be without’. The reason for his emphasis on the development of the moral qualities of mind and character has far reaching implications. Just expressing one’s belief in values is not sufficient for these can also be easily, and often unwittingly, debased. An example can illustrate this point.

Agitations and protests against injustice as well as historical and social wrongs are certainly important. But the moment the sense of justice becomes a plaything in the hands of interest groups – a devastating tool for sowing seeds of divisiveness in the social arena – not only do conflicts arise but a sacred value like justice is transformed into a negative ideology. The attempts to exploit the name of justice to extract benefits for one’s own contingently-assembled group thwart the noble aspirations of a just society. Invariably, this brings benefits and gains to a group, but if this happens in exchange for complicit silences and the turning of a blind eye towards injustices and brutalities meted out to others, ethical values stand profaned, and in fact become mere bargaining chips for negotiations. A cultivated and civilised mind committed to justice acknowledges and resents injustice as inflicted against all others, and offers to fight against its oppressive forms, ignoring the narrow benefits for some.

Also read: The University Must Speak Without Fear of Intimidation

We therefore owe it to ourselves and our sacred duty towards nation-building to preserve the university as ‘a centre of consciousness and human responsibility for the civilised world’. This does not mean that students should be taught moral science and made to recite moralistic platitudes. On the contrary, a sincere engagement with knowledge and with whatever is best in human cultures and civilisations, as Matthew Arnold puts it, will lead to that magnanimity of thought and character which is essential for our humaneness.

It ought to be acknowledged that in modern times, the university, like vocational schools, also serves an essential and important function of training and providing technical knowledge to professionals. At the same time, it is paramount to accept that skills and practical knowledge easily become obsolete and outdated. The university has therefore to go beyond its vocational and industrial research potential.

In The Institution of Intellectual Values: Realism and Idealism in Higher Education, American philosopher Gordon Graham emphasises that it is crucial to differentiate between ‘utility’ and ‘valuability’. Studying medicine and doing research for discovering cure and medicines for diseases are irrefutably the greatest utility contributions of medical universities, unmatched by any other kind of educational institutions. In comparison, Rabindranath Tagore’s Geetanjali has no utility function, but its ‘valuability’ remains unmatched by the life-saving knowledge and drugs. Imagine a world of perfect, futuristic, eco-friendly, sustainable, smart cities, where everything works with clockwork precision. How would life be without cultural and civilisational dimensions of life? It is only education in humanities and philosophy that enables us to enjoy the fruits of culture, as well as to make us understand ourselves and our experiences in life.

In 1852, British priest Cardinal Newman was called upon to prepare the blueprint of a Catholic university in Dublin. In response, he published a treatise The Idea of a University, outlining his philosophy of education. Though Newman, as a Catholic cardinal, sincerely believed that knowledge was imparted for understanding the greater glory of God, he did not accept that it required restrictions and control. Therefore, the institution he proposed remains secular in spirit. He affirms that engagement with knowledge is essentially an effort to discover truth in order to avoid obfuscations brought on by bigotry, narrow mindedness and selfish interests. Understanding well the significance of free inquiry, Cardinal Newman warned without equivocation that only commitment to the sacred value of disinterested learning along with truthfulness and sincerity can provide a check against the much too common sophistries prevalent in any era. That remains the core essence of this institution even now, even though modern societies and the systems of knowledge have undergone radical transformations.

The university’s ultimate purpose is to develop intelligent and imaginative beings geared towards ethical existence and action. For only this would ensure that we desist from the temptations of forging Faustian compacts, using sophistry and glibtalk to poison truth – increasingly becoming the bane of contemporary societies. Only when the British critic-educationist F.R. Leavis’s vision of the ideal university as ‘the centre of consciousness and conscience’ becomes a reality, will we be equipped to realise the humane and noble aspirations envisioned by the founding fathers of our nation in the Indian constitution.

Shikoh Mohsin Mirza teaches English at the University of Lucknow.