Bihar's School Examination Board's announcement comes at a time when it is under pressure to conduct exams without foul play in the wake of a spate of cheating incidents. 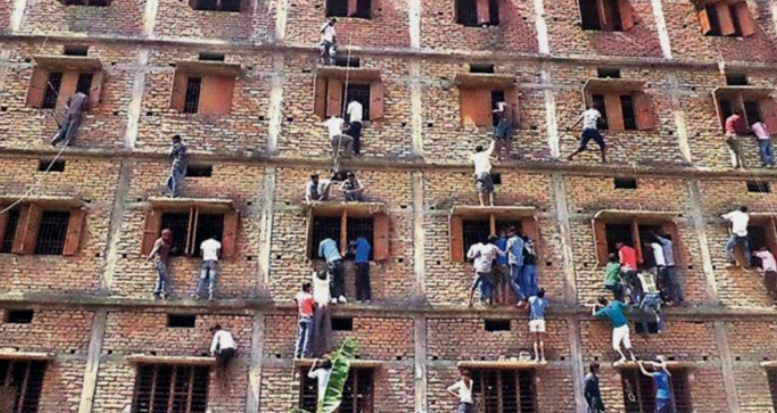 New Delhi: The Bihar School Examination Board’s decision to ban students from entering class X board examination hall wearing shoes and socks has stirred up a huge controversy. The board’s decision has been prompted by the objective to prevent students from cheating. The opposition has alleged that such a decision constitutes  “mental torture” for students.

The BSEB’s announcement comes at a time when pressure has been mounting on the board to conduct exams in  fair and proper manner. For quite some time, the board has been at the centre of a spate of controversies  following media revelations about widespread cheating in class X and XII board exams. Notable in this context was the widely circulated image in 2015 showing men scaling the walls of a school in Vaishali district and passing chits through windows to examinees.

Last Sunday’s announcement applies to 1,426 exam centres and 17.70 lakh students, who are to sit for the exams that began yesterday. In it’s circular, the BSEB asked students to wear slippers and enter the examination hall. The decision, according to the authorities, was also to save time spent in checking and invigilation. The move – supposedly – has been driven by centrally conducted examinations such as the Common Admission Test (CAT) that banned shoes in 2016.

Apart from this, the plus two exams in the state, that ended last Friday, saw a number of other measures taken to prevent instances of cheating, which were  to be followed for the class X examination as well. As of now, there are two layers of frisking ­– one outside the exam centre and then again at the hall.

Under the new policy, there will be one invigilator per 25 candidates and the invigilators are to be assigned new centres every day. The examinations are going to be video recorded and section 144 of the Indian Penal Code is going to be in effect in areas up to a radius of 200 metres from the test centre.

However despite these preventive measures, 985 candidates taking the 12th standard exams which ended last Friday, had to be expelled for using unfair means; 25 impersonators for student examinees were also nabbed.

The BSEB’s decision has drawn both praise and criticism. Some BSEB officials, teachers and examiners called it a practical way to address the problem of cheating, reported the Indian Express.

Speaking to the paper, an exam centre superintendent at a school in Munger said that CCTVs at the venue might not be enough as students could go to the washrooms and refer to chits. “Shoes and socks are known to hide chits and papers, but frisking at such scale is not possible. The rule will at least minimise chances of carrying chits in person.”

Backing the move, Rohit, a student appearing for banking examinations, said that the new decision would provide a level playing field to “genuine students”. A parent on the other hand called the move farcical and said “Why have they installed CCTVs then? The BSEB wants to hog limelight and please their political bosses with such measures.”

The state’s education minister, Krishna Nandan Prasad Verma, on Monday said, “Bihar has been defamed for long for cheating in examinations. We want to put an end to it. Since more than 17 lakh students are appearing in the board examinations, it is difficult to check each other,” reported the New Indian Express.

Opposition parties Congress and the Rashtriya Janata Dal protested the decision. Tejaswi Yadav, former deputy chief minister, said, “This measure is nothing but mental torture to students… The board may one day ask them to take off their clothes.” In May 2017, results of Ganesh Kumar from Samastipur, declared topper in the arts stream with 82.6%, had to be cancelled within two days. There was more revelations to come, showing glaring age discrepancy. An NDTV report said Kumar claimed he was 24 years old, while he was actually  42 years old, and the father of two children. Though Kumar had scored 65 out of 70 in music practicals, he fumbled when the media asked him basic questions about ‘sur’, ‘taal’, and ‘matra’. He told a TV channel that the singer Lata Mangeshkar is known as ‘Maithili Kokila’ — a title given to folk singer Sharda Sinha, who is from the same town as Kumar.

These revelations were similar to those that came to the fore about Ruby Rai, Bihar’s class 12 topper in the 2016 board exams, who couldn’t answer basic questions about political science.

At a broader level, the quality of Bihar’s school education continues to be a cause of serious concern, with one in four eighth standard students lacking basic reading skills, according to the annual status of education report (ASER), 2016, by NGO Pratham. The analysis for mathematics in primary schools showed a 10% decline in learning outcome in 2016.

Rates of enrolment in schools were seen to be high in the state but attendance remained abysmally poor at 50-60%, compared to above 80% attendance in states like Gujarat, Maharashtra, Kerala, Tamil Nadu and other states.

The report had revealed that although facilities in schools had improved, Bihar still had a long way to go for the schools to be in compliance with the Right to Education Act.