Protests Continue at TISS Over Cancellation of Aid for SC, ST, OBC Students

While the issues around student aid have been raised for more than a year now, the last four days have seen large-scale protests at all TISS campuses. 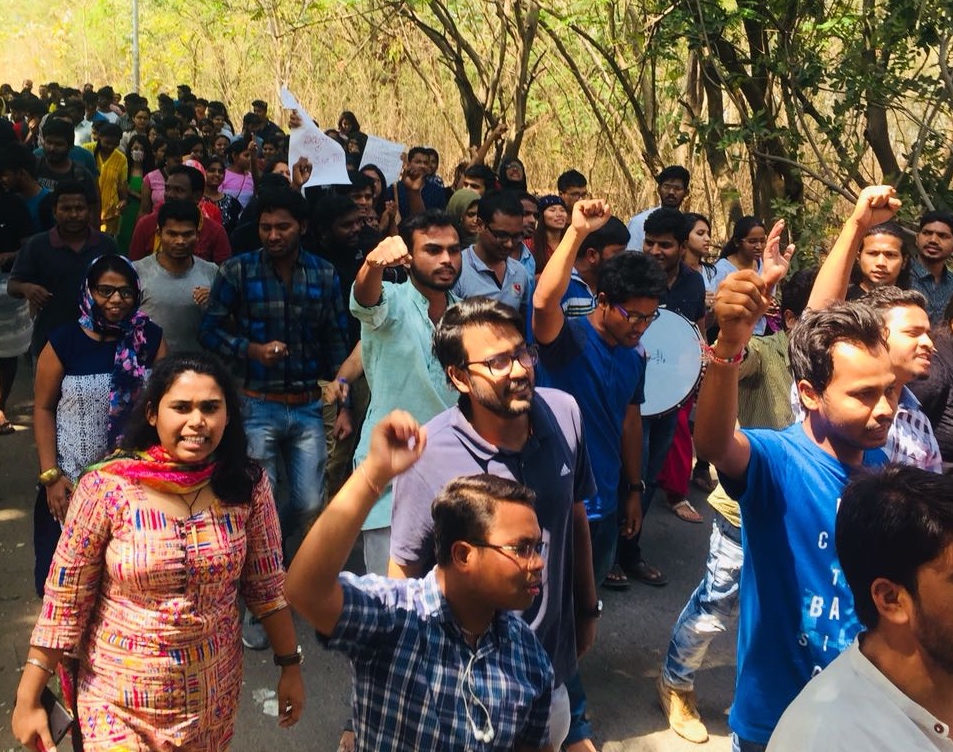 Mumbai: What began as the struggle of some students belonging to marginalised sections of society studying at the premier Tata Institute of Social Sciences (TISS) in 2016 has now become a large-scale protest. A number of the institute’s students have called for a complete boycott of lectures and field work.

The students’ union-backed protest began simultaneously on February 21 at all four TISS campuses – Mumbai, Tuljapur, Hyderabad and Guwahati – against the institute’s decision to stop student aid to those belonging to Scheduled Castes (SC), Scheduled Tribes (ST) and Other Backward Classes (OBC) from 2016 onwards. Saturday was the fourth day of the protest.

At the beginning of the 2017 academic year, the TISS administration had suddenly announced that it would charge dining hall and hostel fees from everyone – including the Government of India-Post Matriculation Scholarship (GOI-PMS) students belonging to SC and ST categories. Students who were then in the second year of the two years masters programme also had to pay.

“Until 2017, SC and ST students got a waiver on hostel and mess fees along with tuition fees, and this money was paid by the respective state governments as a part of the GOI-PMS. But this money gets disbursed late and so the institute would recover the costs from the University Grants Commission (UGC). But with budget cuts at the UGC, the administration decided it would recover that money from us,” said Vikas Tatad, one of the agitating students and also a student union’s literary secretary at TISS Mumbai. 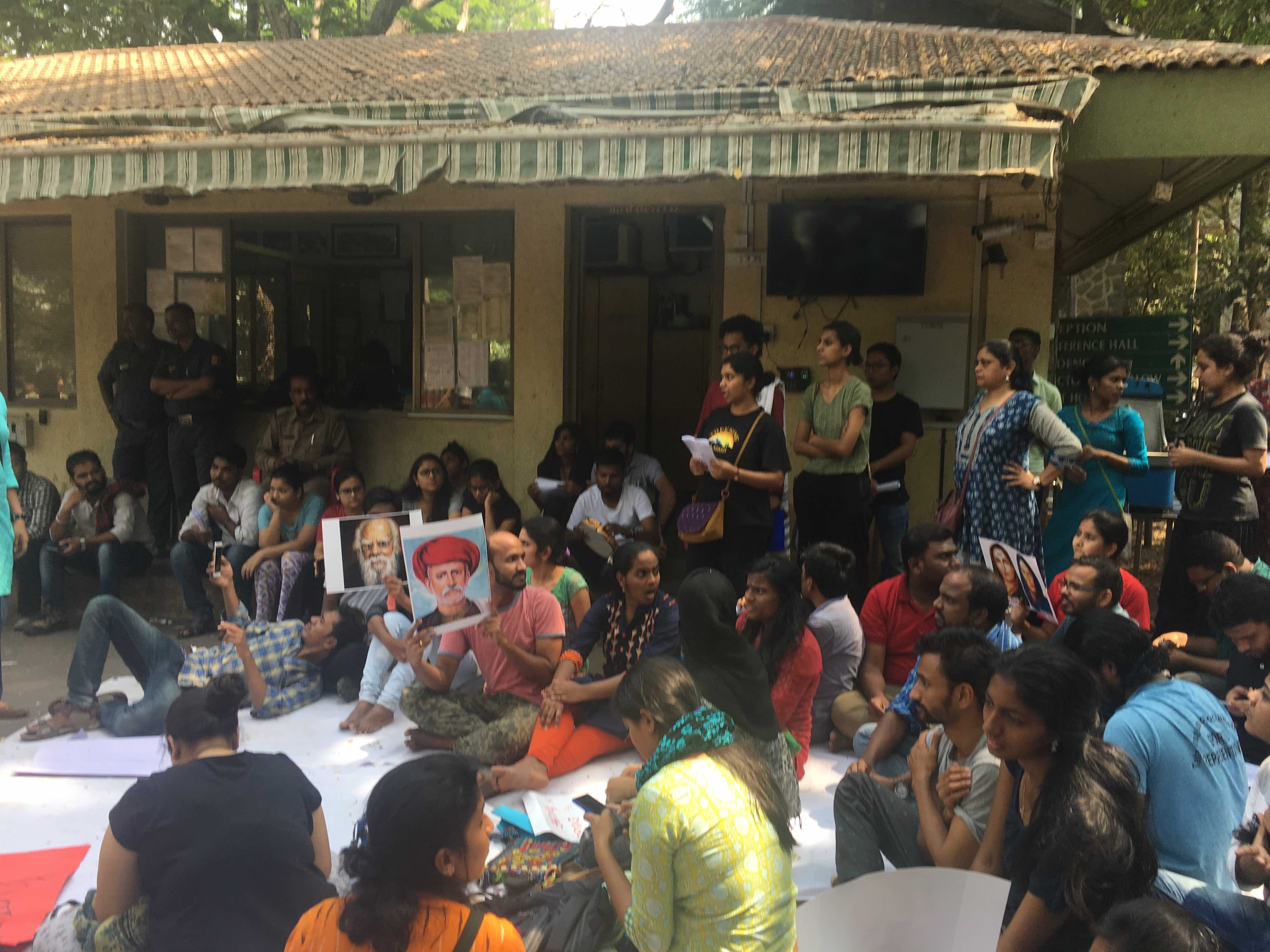 The protesting students have demanded that the 2017 decision be revoked, and that the 2016-18 and 2017-19 batches of students from marginalised communities be exempt from paying the fees. One of the student’s union members said that for the 2017-19 batch, the prospectus specifically mentioned student aid.

“But that was withdrawn at the time of admission. This is an illegal thing. Students decide to study in a particular university taking into consideration several factors, including its affordability. We have demanded that the fees for both 2016-18 and 2017-19 batches be revoked. And for the upcoming batches, we have demanded that the administration makes a special provision to accommodate students who cannot afford the fees.”

The TISS administration has agreed to the demands partially. The registrar said in a press statement,

“For the 2016-18 batch, all the SC/ST GoI-PMS scholarship holders registered for the Masters’ programme in 2016-18 will be permitted to continue with their studies and appear for examinations in March – April, 2018. The hostel charges, additionally are waived off. The payment of dining hall charges is being deferred until the time that the students have the means to do so (as and when they receive the scholarship amount from the Government in their accounts or when they get employed).”

The students, however, are not happy with the administration’s response. “These are just empty words. The students have been petitioning and making demands for years. Our grievances have been ignored for a long time. Most of us will lose a great deal, both academically and financially, if the administration does not accept our demands. We are not seeking charity but what is rightfully ours,” said Chinmay Patil, an MA student at TISS Hyderabad.

About six months ago, a delegation of SC, ST and OBC students had met the minister of state for social justice and empowerment, Ramdas Athawale, and discussed their issues in detail.

“In this meeting, we were assured that our issues would be taken up on a priority basis and we would not be made to pay. While that conversation is still on, the institute went ahead with exerting pressure and demanding fees from the students. Most students will have to drop out if the administration does not relent,” one of the protesting students said.

While the SC and ST students have been covered under the GOI-PMS scholarship, the OBC students do not get any financial aid, either from the university or the state government.

“OBC students until a few years ago were provided fees waiver, but that too was stopped arbitrarily. As it is, the representation of OBC students in the campuses is very low. And with no financial aid, the institute has closed the doors on us completely,” said Sridhar P., a social work student at TISS Mumbai.

While the core demands remain the same on every campus, each campus also has specific issues. The charter sent by the students at the Hyderabad campus to the administration, for instance, includes demands like improving infrastructure on campus, providing security to students and lifting the curfew time for women students. Similarly, at the Mumbai campus, the students have asked for an SC/ST faculty member’s appointment as a social protection officer, as opposed to the upper caste faculty member who is presently holding the post.

While the administration is yet to give in to the student’s demand completely, several senior faculty members and the SC/ST Employees’ Welfare Association at TISS came out in support of the students and addressed them on Friday afternoon.

Following this, the teachers’ association at TISS Mumbai also extended complete solidarity to the students. Members of the association met the protesting students at the entrance of the college and participated in the protest on Friday evening. “We had an elaborate discussion on the several issues that students have been agitating over and have decided to extend complete solidarity to your cause,” announced professor Meena Gopal on behalf of the union.

Student groups from Mumbai, Delhi University and Jawaharlal Nehru University have also issued statements in support of the protesting students at TISS.