The Modi Government's Surgical Strike Against Science and Scholarship

Since May 2014, the Modi government has waged an almost continuous war against the intellect by wilfully undermining our best universities and research institutes. 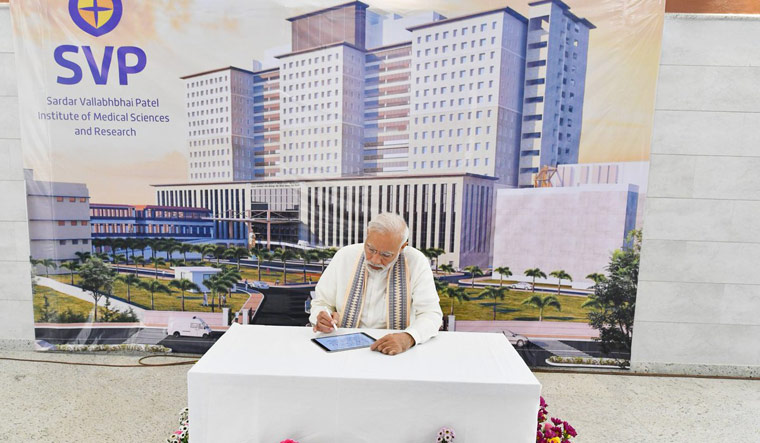 A term greatly beloved of the Narendra Modi government is ‘surgical strike’. It was first invoked in September 2016, after a cross-border raid undertaken by the Indian army on camps in Pakistan. Notably, the army itself did not use the term; it was the prime minister and his propagandists who did. In November of the same year, the prime minister’s sudden, cataclysmic withdrawal of the Rs 1,000 and Rs 500 currency notes was also termed a ‘surgical strike’ (against black money) by spokespersons of the ruling party.

The surgical strike against terror was ineffective. For our security forces have continued to battle incursions by militants from Pakistan on a more or less daily basis. The surgical strike against black money was counterproductive. While demonetisation failed to eliminate black money, it did eliminate – by sending into bankruptcy – many small enterprises whose transactions were conducted partly in cash. It also hurt millions of farmers who suddenly found themselves without the money required to buy seeds or fertilisers for their economic survival.

There is, however, one set of surgical strikes conducted by the present regime about whose efficacy there can be no argument. Since May 2014, the Modi government has waged an almost continuous war against the intellect, by wilfully undermining, one by one, our best universities and research institutes. These attempts have been extremely successful, leading to a loss of morale and credibility within these institutions, which are rapidly losing the status they once enjoyed in India and the world.

Also read: A Seminar With Pseudoscience Has Blessings of DU’s Department of Education

The contempt with which the current prime minister holds scholars and scholarship is manifest in the cabinet ministers he has chosen in these spheres. The two HRD ministers he has thus far appointed have absolutely no background in education or research; nor any interest in listening to experts in these fields. They have, sometimes, taken their cue directly from the Rashtriya Swayamsevak Sangh, as witness the appointment of sanghi ideologues with zero scholarly pedigree as the heads of the Indian Council of Historical Research and the Indian Council of Social Science Research, respectively.

At other times, they have taken their cue from the RSS’s student front, the Akhil Bharatiya Vidyarthi Parishad, as witness the unrelenting hostility expressed by the HRD ministry towards two of our finest public universities, the Hyderabad Central University and the Jawaharlal Nehru University – in each case prompted by the ABVP, which is desperate to make inroads into institutions whose student bodies have not been particularly receptive to its propaganda in the past.

Some right-wing ideologues claim that all this is merely by way of course-correction – that in the past these universities were dominated by foreign-inspired Marxist ideologues who are now being replaced by swadeshi patriots. This argument would hold some water if the Modi government’s war on the intellect was restricted to the social sciences and the humanities. But it is not; this is a war that has wholeheartedly taken on the natural sciences as well.

The lead has come from the very top, with the prime minister himself claiming that the ancient Indians invented plastic surgery as well as in-vitro fertilisation. Further, he has appointed as his minister for science and technology a man who believes that “every modern Indian achievement is a continuation of our ancient scientific achievement,” and, indeed, that the Vedas anticipated the theories of Albert Einstein.

These claims by our S&T Minister were made not in private conversation, nor in an RSS shakha, but in the Indian Science Congress. In recent years, this annual event, supposed to showcase the latest trends in modern science, has instead seen presentations by the minister’s ideological kinsmen claiming that the ancient Hindus invented the airplane as well as stem-cell research (the Kauravas apparently being the first test-tube babies).

All this would be funny were it not so tragic. Since the visionary Jamsetji Tata helped found the Indian Institute of Science more than a century ago, scientific research in this country has been guided by reason and experimentation – rather than by superstition or myth. Institutes such as the Tata Institute of Fundamental Research and the National Centre for Biological Sciences have a well deserved international reputation.

Meanwhile, the IITs have played a critical role in maintaining a decent standard of technical education, with their graduates contributing to the country’s economic progress in a multitude of ways. The hocus-pocus, mumbo jumbo, now promoted by Union ministers (and encouraged by the prime minister), has caused grievous and possibly irreparable damage to scientific thinking in India.

Critics of this government’s war on the intellect tend to contrast our present prime minister with our first prime minister. Thus, writing in the Deccan Herald of February 7, 2019, Prasenjit Chowdhury remarks: “Nehru left India with the world’s second-largest pool of trained scientists and engineers. Men like Homi Bhabha and Vikram Sarabhai built the platform under Nehru’s tutelage for Indian [scientific] accomplishments … Modi, in his attempt to negate Nehru who was noted for his vision to inspire a scientific temper, has chosen instead to mainstream pseudo-scientific orthodoxies.”

I would add that that the Modi government has also put at risk India’s high quality traditions of social science research. Contra sanghi ideologues, Marxism was merely one of several intellectual currents in the Nehruvian academy. Thus D.R. Gadgil and André Béteille were the Bhabha and Sarabhai of their fields, economics and sociology, respectively. Both were staunch liberals, as well as anti-Marxist. Gadgil and Béteille (and others like them) inspired serious research on such subjects as inequality, education, health and rural development, enabling the framing of public policies based on evidence rather than ideology. This too has now been placed at risk by the sanghi infiltration of our academic institutions.

When it comes to promoting science and scholarship, the Modi government is markedly inferior even to the first National Democratic Alliance government. Quite a few of the ministers chosen by Atal Bihari Vajpayee had a high regard for learning and expertise. The HRD minister in the first NDA government, M.M. Joshi, had a PhD in physics himself. His cabinet colleagues, George Fernandes, Yashwant Sinha and L.K. Advani, were all keen, not to say obsessive, readers of books on history and public policy. Jaswant Singh and Arun Shourie not only read serious books but wrote them as well.

By contrast, I do not believe there is a single minister in this government (the prime minister not excepted) who has a deep interest in history, literature or science. I wonder if any of them read more than the daily newspaper; some may not even venture further than Facebook, WhatsApp or Twitter. Little wonder then that when appointing vice-chancellors of universities or directors of research institutes, they choose third-rate ideologues rather than first-rate scholars.

The Modi government’s malevolent attitude to knowledge has not damaged this writer’s career, since I left the academy 25 years ago. Yet it has left me with an abiding sense of sorrow. For I was entirely educated in India, in public universities whose autonomy was (at the time I was within them) respected and even encouraged. Now, as an unaffiliated freelancer myself, I have seen my scholarly friends and colleagues suffer, personally as well as professionally, from these politically motivated attacks on the institutions to which they have devoted their own lives.

A year after Narendra Modi came to power in New Delhi, I wrote that his government was the “most anti-intellectual” this country has seen. Since then, the Modi regime has done nothing to make me reconsider or reverse this judgment; and many things to confirm and consolidate it. From the moment it came to power, the government led by Modi has carried out a series of surgical strikes on science and scholarship, which (tragically) have been far more effective than those conducted against terrorism or black money.

By so systematically undermining our finest institutions that produce knowledge and breed innovation, the Modi government has gravely undermined the nation’s social and economic future. Indians now living as well as Indians yet unborn will bear the costs of this savage, unrelenting, war on the intellect.

This article was originally published on the Telegraph. Read the original here.