Rohith Vemula, Narendra Dabholkar, Govind Pansare and M.M. Kalburgi were all targeted for aspiring to a progressive society – an idea that is anathema for Hindutva forces. 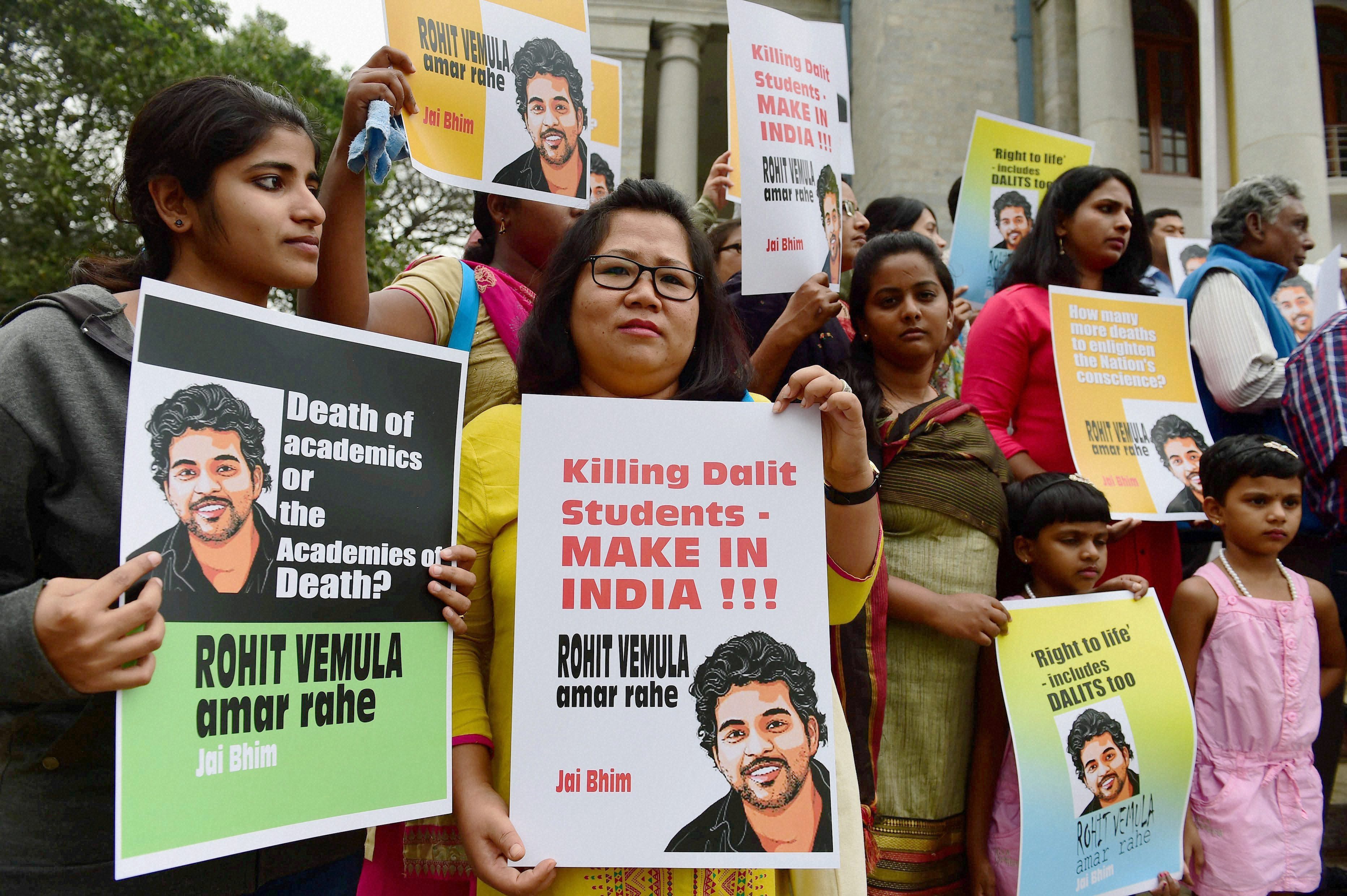 Bengaluru: Members of the Student Christian Movement of India staging a protest over the death of Rohit Vemula, a doctarate student at the Hyderabad Central University who was found hanging in a hostel room, in Bengaluru on Tuesday. PTI Photo by Shailendra Bhojak (PTI1_19_2016_000355B)

“Men are mortal. So are ideas. An idea needs propagation as much as a plant needs watering. Otherwise both will wither and die.”
–B.R. Ambedkar

The death of Rohith Vemula, research scholar at the University of Hyderabad, seems to have shaken the conscience of society at large, although some voices from the ruling dispensation would have you believe otherwise. Not only have they remained  unmoved by this tragic incident; they have gone so far as to  malign the victim of  institutional persecution.

This is not the first case of a bright Dalit student driven to suicide in a hallowed institution of higher education, nor will it be the last. According to reports, nine students have taken their lives in the University of Hyderabad in about as many years, not to speak of the suicides by students at Indian Institutes of Technology (IITs) and at the All India Institute of Medical Sciences (AIIMS).  The feudal, casteist and gender biased mindset is far too deeply entrenched in these institutions to be rooted out in a few decades; it is also the  reason why the  Government of India has singularly failed either to initiate any action  against the perpetrators or implement any of the recommendations of the Thorat Committee that it  instituted in 2006 to look at the issue of discrimination against students from a socially deprived background at AIIMS.

The reason for the violence of acute institutionalised discrimination against Dalits and other marginalised sections is quite apparent. The mere presence in such institutions of students, whose ancestors’ tongues would be cut off if they  recited slokas or molten lead poured into their ears if they heard  words of knowledge,  seems to rattle people in  positions of power.  New forms of discrimination are invented to ensure that these students pay the price for having dared to enter educational institutions that should have continued to remain the privilege of a select few as has been the case for centuries.

It is a double whammy for students from Dalit and tribal communities.  They grow up with a belief that education will help them  break free from the shackles of caste but find that the realities of higher education institutions are often worse than in Indian villages which, according to Dr. Ambedkar, were a sink of narrow-mindedness, casteism and communalism.

To make matters worse there has been a substantial withdrawal of the state from areas of higher education, leaving the field open for privatisation or rather commercialisation of higher education, which is bound to put it out of the reach of the poor and the downtrodden of the country in the days to come. Higher education will become a playground for those with deep pockets.

The ultimate irony is that these ‘modern‘ institutions of learning perpetuate practices that militate against the idea of modernity. After all, what ideas were students like Rohith propagating or challenging which resulted in the Vice Chancellor passing orders  that were more akin to the diktat of a khap panchayat? Rohith was denied access to the hostel, administrative building and common areas, and his stipend was withheld. What was this if not an extreme form of social ostracism? It was this institutionalised climate of oppression that made Rohith refer to his birth as a “fatal accident” and end his life by hanging himself.

When a bright individual like him takes his life thus, what a setback it is for his immediate family and his larger family of peers and juniors who would have looked up to him. What message does his suicide send out to them about their place – their very existence — in modern India, and their right to freedom of thought and expression that is guaranteed to every citizen under the Constitution of India? It seems their servitude must continue; they cannot dream of a future in which their country and the institutions it spawns would guarantee the Constitutional promise of looking after the interests of the marginalised sections. So if they say documentaries such as Muzaffarnagar Baaqi Hai on the Muzaffarnagar riots should be shown to conscientise students; if they speak out against the death penalty in general and also hold that Yakub Memon could have served a life term – all this in the interest of creating a platform for constructive debate — they will be branded as anti-national or apologists for terror.

In Delhi’s January cold, students brave the onslaught of police water cannons during a protest against the Ministry of Human Resource Development over the suicide of Rohith Vemula. Credit: PTI

The writing on the wall is clear: if one holds a view different from those in power, they will be branded anti-national. The backlash is tremendous – on the street, in institutions and online. In fact the BJP’s veritable army of trolls on the social media has a one-point agenda — of indulging in vicious bullying tactics by calling people traitors for holding views different from theirs. For a  political party and its parent organisation, the RSS, who had no positive role to play in  India’s freedom struggle, trying to arrogate to themselves the mantle of being the sole custodians  of patriotism and nationalism is ironical to say the least.

To put it simply, those who subscribe to the views that all men and women are not born equal will always question the ideas of liberty, equality and rationalism. The hypocrisy of the BJP and its student wing, the ABVP, is there for all to see. It is trying its best to appropriate Babasaheb Ambedkar in a bid to increase its constituency. But the experiences of Rohith and his fellow students who were part of the Ambedkar Students’ Association shows that any attempt on their part to  fight the battle for  equality and liberty will continue to be anathema for those who profess their loyalty to the ideology of Savarkar and Gowalkar.

At a larger level, Hindutva’s Right-wing ideology rests on the view that people who stand for liberty, equality and rationalism, need to be dealt with severely, and even silenced. Whether such people belong to the so-called  upper or lower castes does not matter; what matters is that these progressive principles cannot be allowed to take root in our country for they would  end up destroying the  unquestioned privileges and unparalleled powers that have been enjoyed for centuries by virtue of the accident of birth. As history bears witness, vested interests have never been known to have willingly divested themselves of their privileges unless there was sufficient force to compel them.

The Right-wing worldview was there for everyone to see in the cold-blooded murder of Narendra Dabholkar, Govind Pansare and M.M. Kalburgi. None of them belonged to the so-called lower castes, but they were men who believed in the values espoused by the Indian Constitution. That should make it amply clear that it is the idea of a society based on egalitarianism and rationalism that is abhorrent to the forces of Hindutva.

It is precisely for this reason that those who consider the suicide of a Dalit scholar as having to do with ‘Dalit issues’ need to do a rethink. Rohith Vemula’s final, irrevocable act was a moment when the elaborate veil hiding the unequal, unjust and inhuman worldview of the Right-wing was lifted for us to see its reality. The question is: will Rohith’s death be in vain or will progressive minds in campuses and beyond come together across the country to unshackle institutions of higher learning from their feudal and discriminatory mindset? Will progressive minds in campuses and beyond join hands to nurture the ideas of liberty, equality and fraternity and so develop India into a truly modern democracy not just politically but socially and economically too? A modern India, in which no bright-eyed scholar need write in anguish as Rohith did, that “…some people, for them, life itself is curse. My birth is my fatal accident.”

Are we willing to stand up and be counted at least for ourselves – if not for Rohith?

Alankar is a former banker.