While Students Use Social Media to Speak to Power, Schools Tutor Them in Slavish Sycophancy

However, the system was quick to use this as an image amplifier for the prime minister portrayed as the sole saviour of these pitiful souls.

Class 12 students, covering their faces to protect themselves from Covid-19, take a look of their notes before entering an examination hall, at a school in Chennai on Tuesday, March 24, 2020. Photo: PTI/R Gnanasasthaa 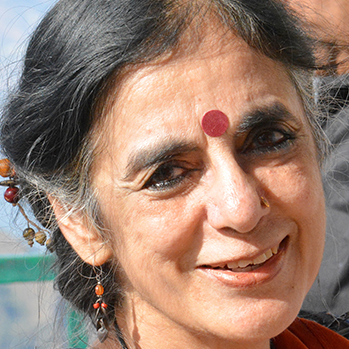 Social media, though deeply embroiled in major tussles of regulation and control, has recently seen young students use its democratising potential to speak to power, and influence indifferent and obdurate policymakers to change decisions in their favour.

The video of a Class 1 student, Mahira Irfan, from Batamaloo in Srinagar has gone viral. Frustrated by her taxing online classes she had quietly picked up her mother’s phone and recorded her complaint to ‘Modi Saa’b’. Rattling off the sequence of the subject classes she was made to attend from 10 am-2 pm, she assertively asked why little children were being burdened with a schedule similar to that of older students of Class 7 or 10.

Her candid and expressive despair touched empathetic chords and went viral across all social media platforms. Her media-shy parents found themselves surrounded by reporters and admirers, after the Lieutenant Governor responded to her question and tweeted: “Very adorable complaint. Have directed the school education department to come out with a policy within 48 hours to lighten the burden of homework on school kids.”

Promptly on June 1, in a rare order, the J&K administration directed all schools to reduce pre-primary and primary online classes to 30 minutes and 90 minutes a day, respectively. In an interview with Peerzada Ashiq of The Hindu, Mahira said she did not know about the prime minister but her father had told her that it’s Modi sahib who decides on the lockdowns [during the pandemic]. “I decided to address my video to Modi sahib. I am happy the class timing has been reduced to 30 minutes. But I miss my school,” she said, preparing to reply to another question.

Education agencies took umbrage and found this neither amusing nor ‘adorable’. While the president of the Private Schools Association of Jammu and Kashmir said they had not been consulted, the Jammu and Kashmir Education Chamber demanded a rollback of the order, asserting that a viral video could not be used to change education policies. However, the Directorate of School Education, in a fresh order on June 4 reiterated its decision adding that “as the visual classes are different from physical classes, it has to be made more enjoyable and more experiential so that the students can develop more interest in academics instead of getting unnecessarily tired and stressed out”. It also disallowed online classes of more than three hours for Classes 9 to 12.

The last few weeks have witnessed an avalanche of Twitter storms by students to get education authorities to listen to their problems. They were dismayed and anxious by the adamant stand of CBSE to hold their Class 12 board examinations, even as they lost family and friends, with the ravaging pandemic taking its devastating toll on millions of lives and livelihoods. They were also disappointed to see that their schools were silent, not communicating their angst or the dangers of conducting the prolonged event, submissively waiting for directions from above.

Isolated in their own silos they could no longer take the chilling uncertainty and anxiety. Students decided to propel their collective youthful agency to nudge the slumbering ‘sanitised’ sanity of the system.

After the Class 12 students had felt let down with the cancellation of the Class 10 exams but not theirs, a dramatic burst of creativity saw what the media called a meme festival, with dialogues and images from popular films, such as “Kab khoon khaulege re tera?” and “Toh ab kya karoon, nahaun?” a GIF with a hysteric flapping of Rajpal Yadav. Several students also posted slogans and passionate appeals: “When will you take action?”, “We Want Justice”, “Equality” and “Life is more Important than Exam”.

They coordinated and signed petitions to cancel different state board examinations, in solidarity with students from Assam to Andhra Pradesh, and drew the attention of supportive lawyers. Indeed, it is poignant to watch Mamta Sharma who had filed a public interest litigation in the Supreme Court on their behalf, who continues to affectionately and reassuringly counsel online students from across the country, who have been spontaneously writing to her. She speaks to them about their valid concerns, advises not to get overwhelmed by anxiety or uncertainty, to trust the alternative assessment that is being worked out in lieu of their exams, and to support others who are still petitioning for their state exams to be cancelled.

While mobilising to get the examinations cancelled, students had also discussed and suggested alternative ways of assessment. Some of them communicated to the Union education minister on April 30 their suggestions for a metric based on the school internal assessment and the Class 10 exam score, after standardising for different difficulty levels and leniency in marking. Others who had been selected through various university entrance procedures advocated for creative options based on performance, including portfolios and group discussions in place of the board scores. They hoped this crisis would help jettison the system out of its unimaginative complacence and allow it to adopt more meaningful ways of assessing their learning, than the dismal board questions they sacrifice precious years of their lives to.

Also read: An Indifferent System Can’t See That Students Don’t Want to Be ‘Board Exam Warriors’

It is ironic that despite decades of innovative assessment interventions in the country, including the open book activity-based Class 8 board examination of the Hoshangabad Science Teaching Programme, in government schools across Madhya Pradesh, that we had developed in the early 70s, half a century later the system continues to ask for recall of mostly irrelevant information even at school leaving stage. Meanwhile the pious rhetoric about examination reforms to promote creativity, collaboration and critical thinking for a ‘knowledge society’ will probably transgress into the next century.

Moreover, as we hearteningly watched the collective agency, empathy and wisdom of students while dealing with an unprecedented dehumanising crisis, the system was quick to use this as an image amplifier for the prime minister portrayed as the sole saviour of these pitiful souls.

Interestingly, a discerning Class 12 student active in the campaign for exam cancellation, confessed in a personal conversation that he had predicted this game. Ten days earlier he had told his parents that after its May 23 meeting the CBSE will decide to push for the board exam, which at the last minute will be dramatically overturned by the prime minister, to desperately undo the public censure he received for the mismanaged pandemic.

@DrRPNishank #cancelboardexams…..@DrRPNishank sir, it’s too risky to conduct board exams in these conditions. Safety of students life is more important than these exams please cancel board exams this year. #CancelBoardExams#CancelCBSEboardExams @PMOIndia @narendramodi pic.twitter.com/grhEOyYYPC

Tragically the narrative was carried even further. The Telegraph reported on June 6 that the Kendriya Vidyalaya Sangathan (KVS) authorities had asked principals of at least two regions to make students tweet under the hashtag “Thank You Modi Sir” for cancelling their board exams. Fifty-one Kendriya Vidyalayas in Karnataka received a WhatsApp message on June 3 from the deputy commissioner for the Bangalore region: “All principal (sic) Bangalore region. Please send at least five videos of hashtag/retweet by your students ‘Thank You Modi Sir’ by 4 pm today (Thursday) for onward transmission to… hq.”.

It was reported that a similar message had been sent to 39 principals of the Ernakulam region from where a student had messaged: “I… wish to express my sincere gratitude to our honourable Prime Minister Shri Narendra Modi for relieving lakhs of students from the entire country from the uncertainty regarding the Class XII board examinations 2021. COVID-19 has definitely disturbed many families and lakhs of students have gone through harrowing times. This decision of our honourable Prime Minister has definitely come as a healing touch to the entire student community. Thank you, Sir, and a big salute to you.” 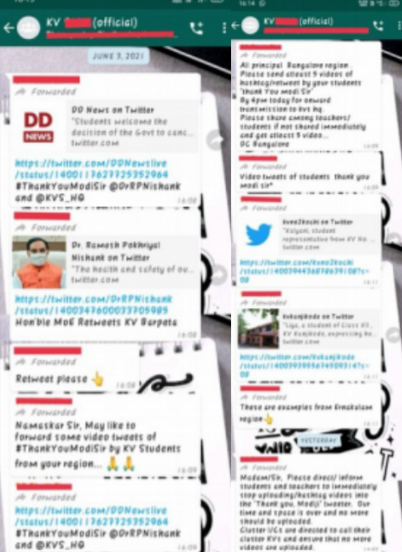 Personal messages from our former students at Delhi University, many teaching in Kendriya Vidyalyas, expressed dismay at the extent to which schools could be coerced to buttress ‘positive’ image makeovers of politicians. Kendriya Vidyalayas are the best resourced and well performing government schools of our system, which our alumni aspire to get recruited to after their teacher education programmes; some have even left their M.Ed. midway when they got selected and were not allowed time by the KVS authorities to complete their professional courses.

School teachers have been shocked and embarrassed to see the autonomy and reputation of these schools undermined in such a manner. Moreover, instead of acknowledging and encouraging the critical agency of their own students, teachers were expected to school them in small strategies of slavish sycophancy. One wonders what respect students would have for their schools, teachers and political leaders, when sucked in early as cogs into ‘manufacturing consent through the political economy of mass media’, as foreseen by Noam Chomsky.

Last April, I had quoted the director-general of WHO in an opinion piece, who had said: “Fake news spreads faster and more easily than this virus and is just as dangerous.” “…the greatest enemy we face is not the virus itself; it’s the stigma that turns us against each other. We must stop stigma and hate!”

I had also emphasised that the search for a vaccine had by then taken off in earnest solidarity among scientists, but we seemed to be “hurtling down the cliff towards the other enemy – of fear, hate and stigma – with science and evidence not always leading policy.” We needed to deal with media narratives of ‘superspreaders’ of racism and xenophobia.

Recently there was another exercise in educational policing. Arresting a YouTuber from Punjab for his racial slurs against an MLA from Arunachal Pradesh which he claimed was part of China, the police brought him to Itanagar, and as its innovative punishment, gave him lessons on the geography and history of the state. A Twitter storm by students and academics from the North-East region had demanded that the NCERT textbooks should have a chapter to deal with the geography, history, ethnicity, and culture of the people of the northeastern states, so that children in other parts of the country do not grow up ignorant and racist.

Indeed we need many creative lessons beyond policing, in compassion and collective action, by students themselves, breaking away from pedantic prescription to more educative, reflective and thought-provoking campaigns through social media. It is their young voice of sanity, suffused with satire and scepticisim, their refrains of healing poetry and music, their aesthetics of hope and transcendent joy that can perhaps, gently and persuasively, vaccinate us from the pervasive infodemic of prejudice, discrimination and hatred we now increasingly find ourselves in.

Anita Rampal is a professor and former dean, Faculty of Education, Delhi University.