Sheldon Pollock: 'My Respect for Ashoka University Has Been Seriously Tested'

Trustees must "provide a full, public, accounting of whatever policies or pressures brought about the circumstances that forced Pratap Bhanu Mehta's resignation," says the leading scholar of Sanskrit and South Asian Studies. 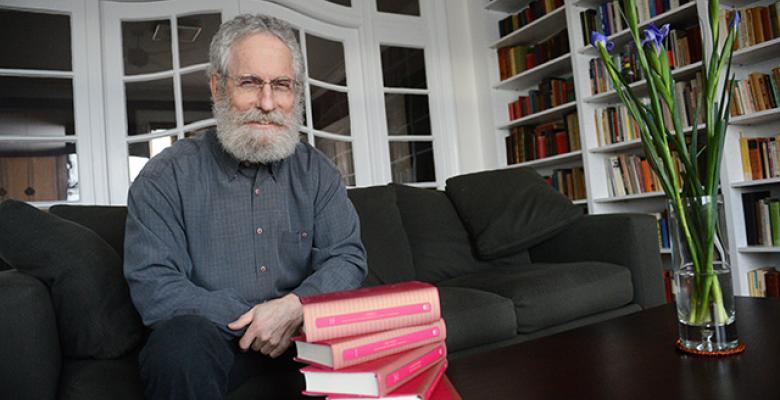 Sheldon Pollock, and the first set of volumes from the Murty Classical Library that he edited. Photo: Columbia University.

New Delhi: Sheldon Pollock, the US-based Sanskrit scholar closely associated with Ashoka University since its founding, has added his voice to the chorus of outrage that has followed Professor Pratap Bhanu Mehta’s resignation from the university.

Mehta resigned on March 15 in the wake of the university’s founders making it “abundantly clear” that his association with Ashoka “may be considered a political liability”.

In a statement that he shared with The Wire on Thursday, Pollock – who is the Arvind Raghunathan Professor of Sanskrit and South Asian Studies at Columbia University in New York and general editor of the Murty Classical Library of India, Harvard University Press – said that his “respect for the institution has been seriously tested” as a result of Mehta’s exit.

Pollock noted that he “was a consultant for Pramath Raj Sinha on the founding of Ashoka University in 2013; I gave the first of the Ashoka “Crossover” Series lecture unveiling the university to the public later that year; I offered the commencement address at the 2018 Ashoka convocation; I donated to its library my own and my late wife’s entire collections of books in 2019. And I have known Professor Mehta for almost 30 years, and have learned from him for 30 years.”

Mehta resigned on Monday after a meeting with the university’s trustees, noting in his letter to the vice chancellor that his “public writing in support of a politics that tries to honour constitutional values of freedom and equal respect for all citizens, is perceived to carry risks for the university.”

Describing Mehta as “the university’s foremost scholar and public intellectual,” Pollock said that with his resignation”my respect for the institution has been seriously tested.”

He added that he has great admiration for the chancellor of the university, Rudrangshu Mukherjee, and for many of the trustees, but wanted them to “provide a full, public, accounting of whatever policies or pressures brought about the circumstances that forced Prof. Mehta’s resignation, and to offer an unequivocal, public repudiation of them.”

If this is not done, and done soon, he said, “the stain on the university will be indelible, and the support of its most fervent admirers permanently lost.”

In the wake of Mehta’s resignation, at least one other faculty member, the government’s former chief economic adviser Arvind Subramanian, has also quit. And over 90 faculty members have issued a letter to the vice chancellor urging the university to ask Mehta to rescind his resignation. “We also request that the university clarify its internal protocols of faculty appointment and dismissal, and reinforce its institutional commitment to the principles of academic freedom,” the letter said.