On multiple occasions, Santishree Dhulipudi Pandit has put her Hindutva right-wing political views out in the open unhesitatingly. She has now deleted her Twitter account, after journalists started sharing her tweets.

New Delhi: Santishree Dhulipudi Pandit, the newly appointed vice-chancellor of India’s prestigious Jawaharlal Nehru University, seems set to continue on the same academic and administrative path as her controversial predecessor, M. Jagadesh Kumar, if her public statements on Twitter are a fair indication of her approach to university matters and public affairs.

Her appointment was announced on Monday, February 7. Kumar was made head of the University Grants Commission last week.

The Union government’s endorsement of Kumar’s aggressive right-wing functioning in university spaces is also reflected in its decision to reward Pandit with the coveted administrative position.

In a message to students and faculty, Pandit said her immediate priority would be to provide an environment for “academic excellences” (sic). And in a nod to the ideology of the Modi regime, she said the “focus would in constructing Indo-centric narratives” (sic). 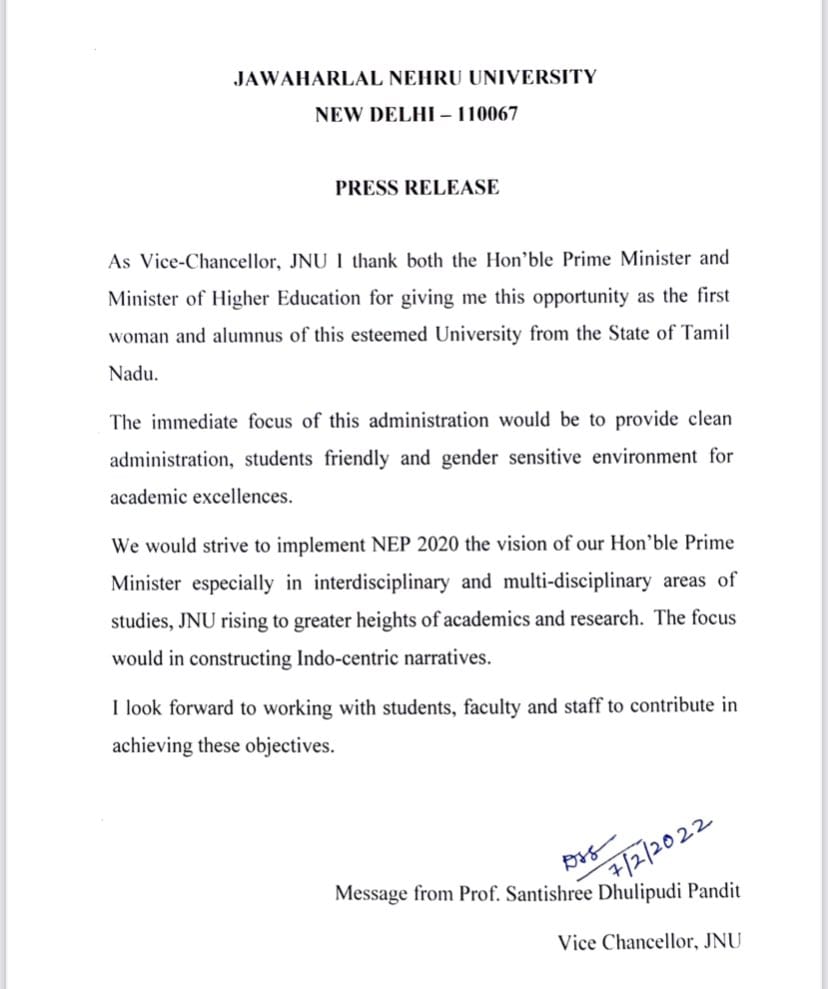 Pandit, known for her proximity with the Rashtriya Swayamsevak Sangh (RSS), has backed calls for genocide and attacks on students and farmers in the recent past.

For instance, Pandit attacked the Left-liberals as “Jihadis” in response to Times Now editor Rahul Shivshankar’s comment condemning the suspension of Kangna Ranaut’s Twitter handle after she called for a genocide against Indian Muslims. In yet another tweet, Pandit has also advocated the persecution of civil rights activists, whom she brands as “mentally-ill jihadists” in “Chinese” style. In another of her tweets, even as she terms Mahatma Gandhi’s assassination as “sad”, she justifies Godse’s action as emerging from the thinking that only Gandhi’s murder was a “solution” for a “united India.” On multiple occasions, she has put out her Hindutva right-wing political views out in the open unhesitatingly. In one instance, she also urged people to vote for the BJP while slamming the “Italian-origin” Sonia Gandhi. 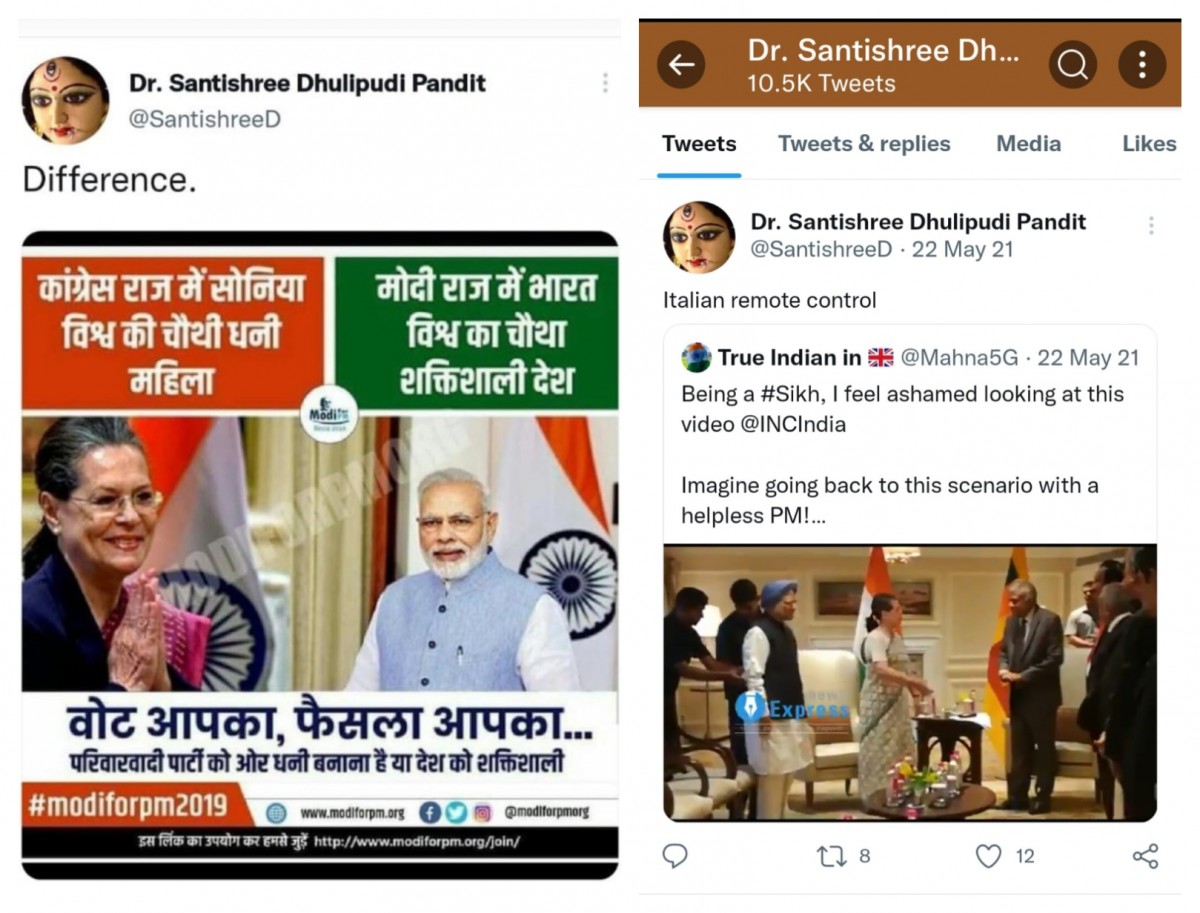 On other occasions, she has lampooned the Left activists of JNU as “Naxal Jihadists” and advocated the weeding out of Rohingya refugees, and called the government to stop the funding of prestigious educational institutions like the Jamia Millia Islamia and St. Stephens College. She has also urged “non-Muslims” to wake up to prevent “Love Jihad”, which she qualifies as “terror by other means”. 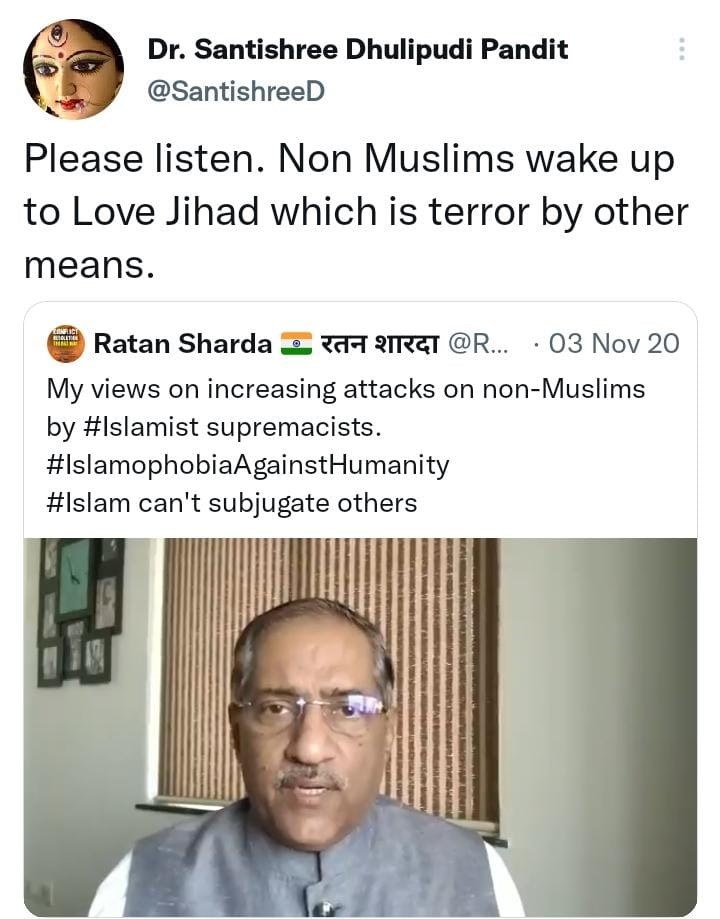 She has often retweeted troll handles on social media, an example of which is when she tagged a picture of The Wire’s senior editor Arfa Khanum and renowned historian Audrey Truschke with the caption that says, “vulture with a predator”. 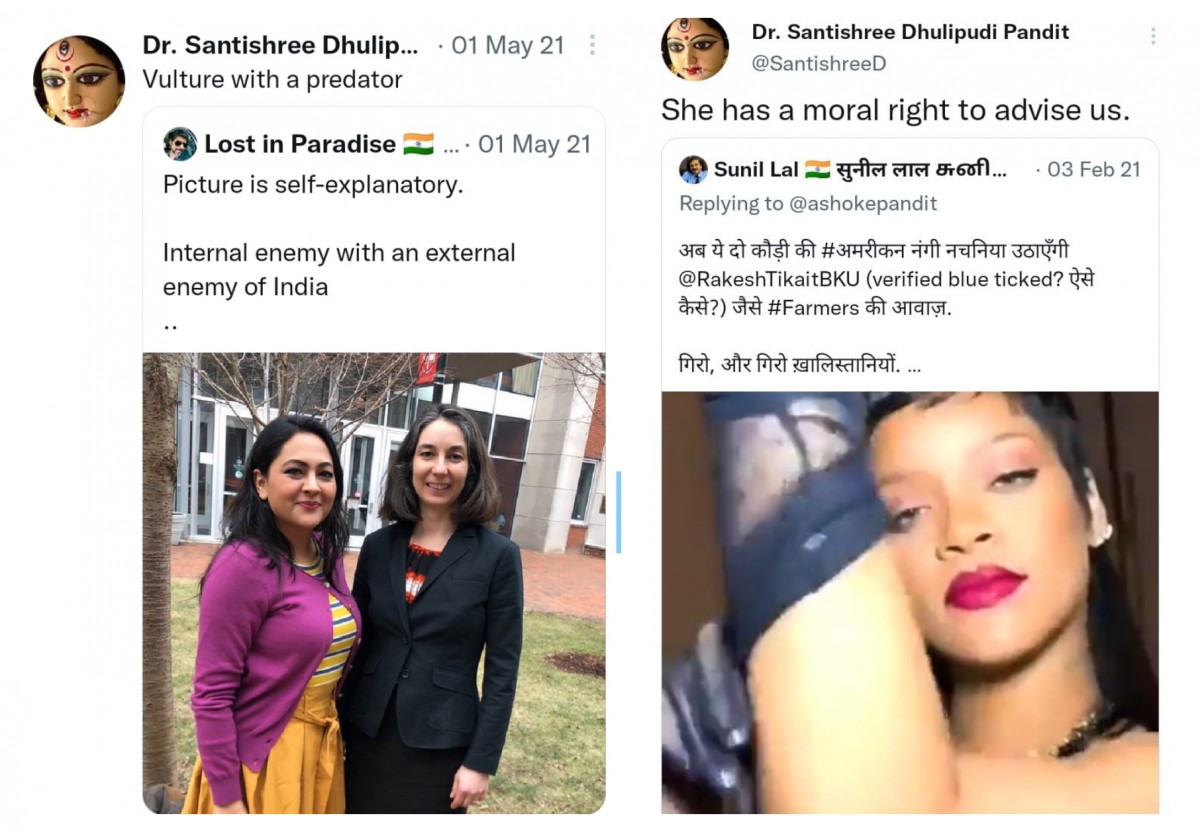 Some of her other tweets: 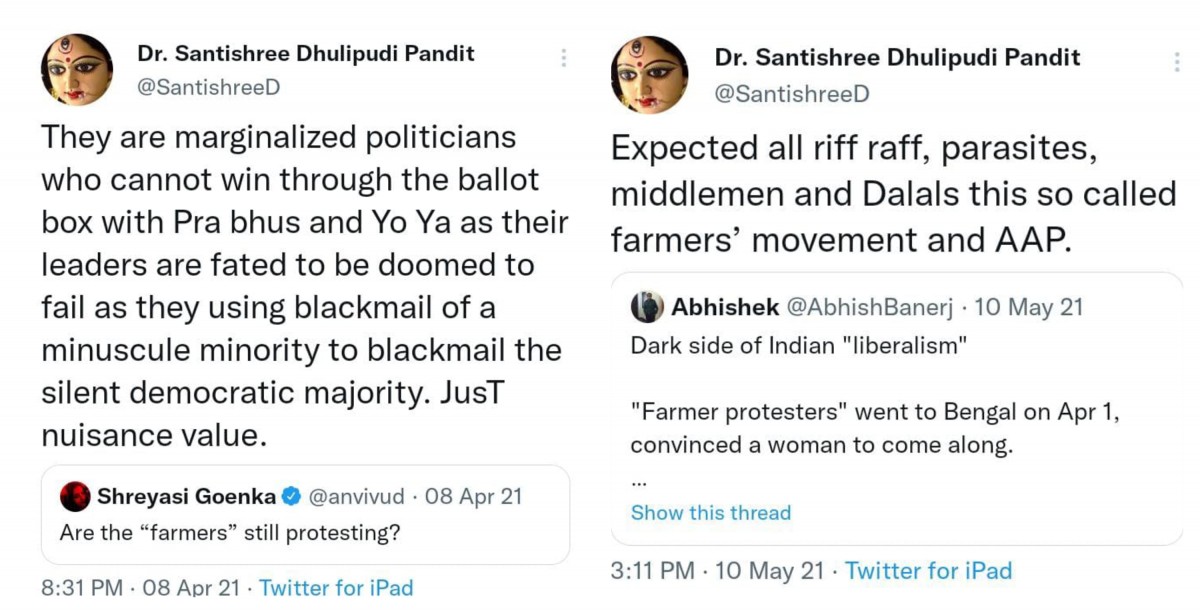 After students and journalists started sharing her tweets following her appointment, she has now deleted her Twitter account.

His tenure witnessed an unprecedented number of altercations between students and faculty members on one side and the university administration on the other. Kumar also faced allegations of partisanship and procedural violations in faculty appointments, political bias in favour of the Hindutva groups, financial irregularities, delayed payments of teachers and contractual workers, large-scale termination of sanitation workers, and a worryingly high number of proctoral inquiries against student activists.

His unenviable record as VC also saw a large number of violent clashes between assertive Hindutva right-wing student groups and other social and political formations on the campus. It was also during his period at the helm that Delhi police arrested JNUSU president Kanhaiya Kumar and students activists Umar Khalid and Anirban Bhattacharya in 2016 on charges of sedition.

Despite a tainted record, Kumar was allowed to have an extended tenure at the campus before being promoted by the Union ministry of education to the position of University Grants Commission’s chairperson last week. His tenure at JNU ended on January 26, 2021.

Allegations of corruption against Pandit

The Union government’s propensity to appoint academics with Sangh Parivar’s credentials in top positions of Central institutions is evident in Pandit’s case too, as it seems to have glossed over allegations of corruption against her.

In 2011, DNA reported that over 1,800 Indian students were given admission in various professional courses between 2002 and 2007 for the seats reserved for Persons of Indian Origin (PIO) when Pandit was the director of the International Students Centre (ISC) in Pune University.

Also read: Six Tables that Tell the Story of Academic Unfreedom in India

Pune University’s Narendra Jadhav had then constituted an inquiry committee headed by Sunanda Pawar, who found that Pandit admitted ineligible and unqualified students in the PIO quota without adhering to rules and regulations. The allegations were first made by university senate member Atul Bagul who after initial struggle secured RTI information that Pandit admitted ineligible applicants who secured only 50-60% and passed higher secondary education from Maharashtra under PIO quota. PIO quota reserves 15% additional seats for those foreign citizens whose parents or grandparents were Indian citizens.

Bagul told the media that the Sunanda Pawar committee found that employees working with the ISC confessed that they received monetary benefits from Pandit for facilitating the admissions of ineligible students. However, he added that by the time the report became public in 2008, the VC had changed and the new VC Raghunath Shevgaonkar did not want to take any stern action against her.

“A committee comprising retired justice JA Patil also held Pandit guilty for the wrong admissions but the UoP authorities took soft-action against her by stopping her five increments,’’ he told DNA.

With her appointment as JNU’s VC, sources told The Wire that her name was cleared after evaluating three candidates for the position. Apart from Pandit, who is a JNU alumna, professor in Centre for European Studies in the School of International Studies Gulshan Sachdeva, and New Delhi-based Inter University Accelerator Centre (IUAC)’s director Avinash Chandra Pandey were also considered. However, Pandit’s ideological weight tilted the balance in her favour.

Pandit comes with impressive-looking academic credentials — her resume is 22 pages long — but there seems to be few if any books or articles from reputed academic publishers or refereed journals. The Union government in her appointment letter also mentioned that she is going to be JNU’s first woman VC. Given her record, however, it only appears that Pandit’s appointment as the VC of JNU, which has become right-wing’s bait to polarise India’s electorate, may only turn out to be more chaotic. By making her partisan political views clear, Pandit has already drawn the battle lines that await her tenure as the administrative head of VC, the impending tussle only likely to damage the academic reputation of JNU further.