Is the Govt Telling Poor Students to Choose Between Politics and Hostel Rooms?

Application forms for students' accommodation funded by economic welfare schemes now contain the declaration: "I am not involved in any subversive activities or any movement against the government." 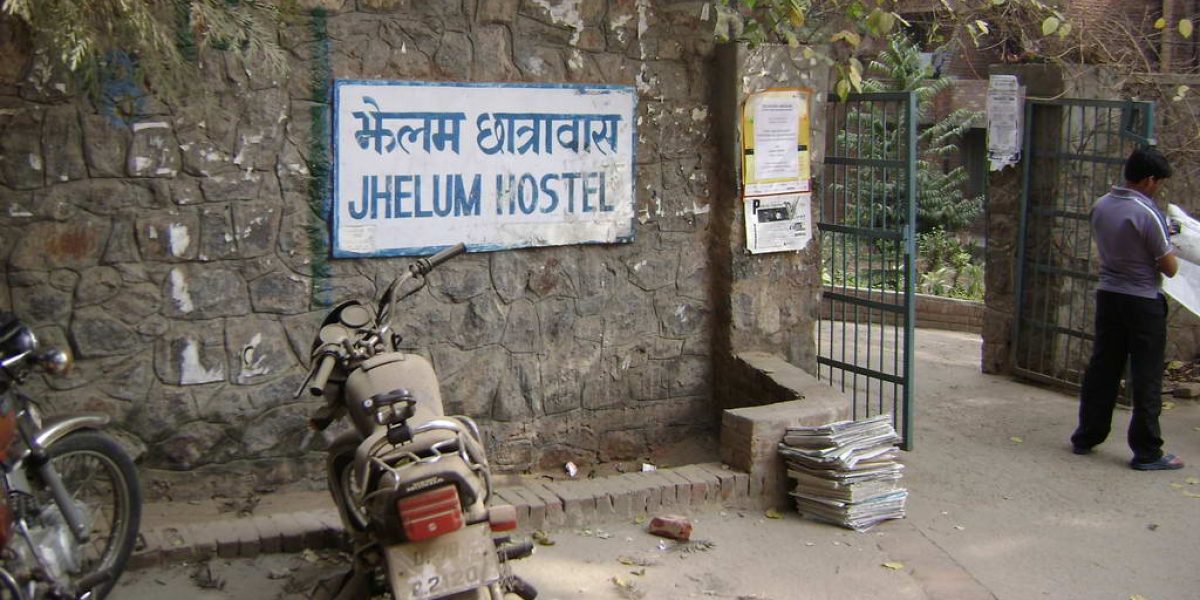 Kolkata: If the governments at the Centre and in West Bengal have their way, they will no longer admit students to government hostels if they participate in ‘subversive’ political acts.

Application forms for accommodation for students belonging to the Scheduled Castes and Scheduled Tribes now contain the declaration: “I am not involved in any subversive activities or any movement against the government.”

The move to exact assertions of apolitical leanings particularly affects SC and ST students, as they are the ones who benefit the most out of government-sponsored housing. At the same time, the students’ housing construction market is concertedly being opened up to private players – which stands to only benefit better off students. 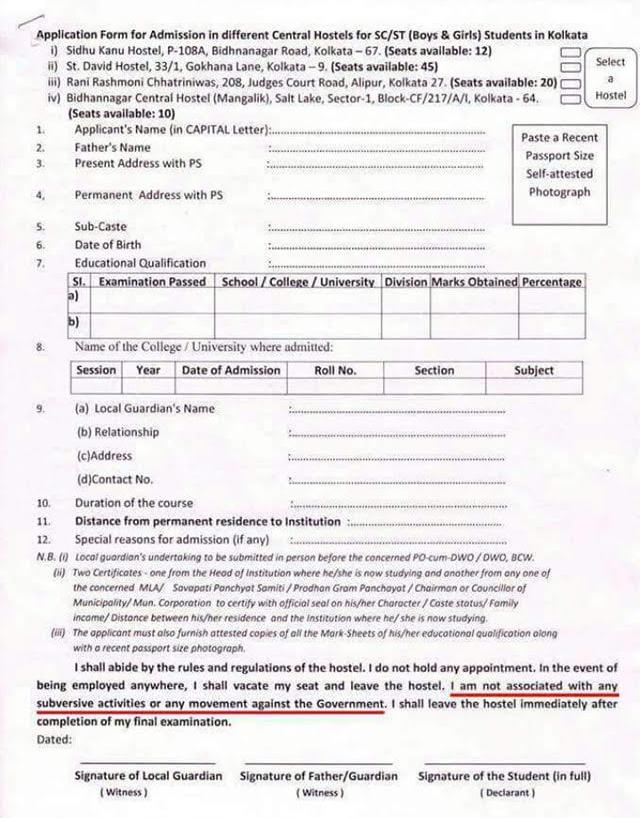 An application form for accommodation in a government hostel. Photo: Facebook/Abhijit Kundu

The new declaration must be signed by the student and co-signed by his or her local guardian, and father or legal guardian. This rider has appeared in a common admission form (available online) for four central government-backed hostels in Kolkata.

“This is cringeworthy. The declaration gets desperate beneficiaries to sign the dotted line and subjects them to arm twisting. They have the Sword of Damocles hanging over them,” says Sanjoy Ghose, a Delhi high court lawyer who specialises in labour and constitutional law.

The phrasing is tricky. “To demand that people not be ‘subversive’ is still justifiable. ‘Movement’ is vague, and vague terms will allow hostel authorities to use force when it suits them, so there is a perpetual threat,” Ghose adds.

Partha Chatterjee, the West Bengal education minister believes that the government is likely to extend this rule to all Central universities too. Chatterjee has consistently opposed students’ political involvement.

“Yes, why should students get involved in such activities? They should concentrate on their studies,” he tells The Wire.

The central government has announced the decision to fully fund living accommodations for boys in areas it identifies as dominated by ‘left wing extremism’. There, it will provide 100% of the required capital. In other areas, it contributes 40-60% of the funds for boys’ hostels. The rest of the cost is borne by the state governments. The Centre bears the full cost for girls’ hostels everywhere.

Yet, it is the boys who apply for hostels from left-wing extremist (LWE) areas whom the government is likely to consider troublesome.

“The attitude here seems to be: take this and shut up,” says Delhi-based civil liberties lawyer Prasanna S.

Ghose says students may well be loyal to India but not to the government of the day, and should not be penalised for the latter. “[Should a declaration be exacted] there needs to be a distinction between government and the State, i.e. the nation state in it,” he says.

Though the Centre plans to provide for a growing number of youths to be housed near their places of study, its responsibilities are poorly fulfilled. Youngsters are forced to live in poorly maintained houses.

The new imposition in the application forms comes to light along with the Centre’s decision to stop funding private institutions, i.e. NGOs or private ‘deemed’ colleges that have many of the same rights and privileges as central institutions, for students’ housing. The Centre will continue to pay up to Rs 3.5 lakh per candidate at government-backed institutions, the Ministry of Social Justice & Empowerment’s 2017-18 annual report, said.

File image of students of Kolkata’s Presidency University demanding to be moved into the renovated Hindu hostel, in August, 2018 Photo: PTI

From 2017-18 onwards, no proposals for new constructions, from either the development sector or private institutions were taken up. Only the expansion of their existing facilities would be considered, the report said.

According to official data, in 2017-18, there was a jump (see table) in central budget allocation for new hostels. Simultaneously, however, there was a sharp drop in the number of reserved category beneficiaries.

In 2017-18, as government patronage for housing in private colleges and NGOs ended, hostel-building works came to a virtual halt.

But the ministry’s report does not explain how an increase in funding relates with the decrease in the number of beneficiaries** in the same year.

Repeated emails, requests for interviews with Department of Social Justice and Empowerment (DoSJE) officials and requests for more information from its media office were ignored. Similar requests to the private firm Development and Research Services, which was commissioned to provide an assessment of the Centre’s EWS intervention, received no responses. 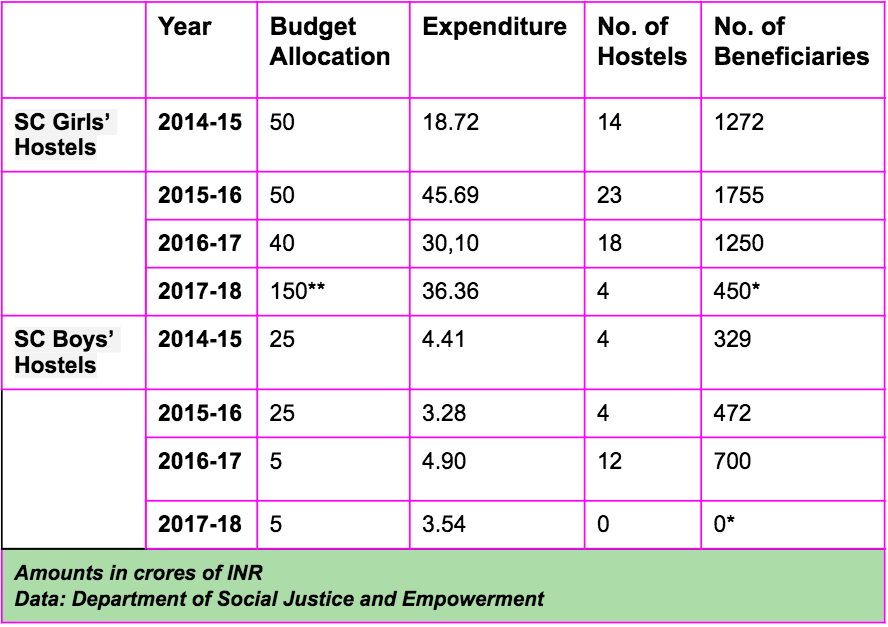 The report shows that 1,755 SC girls benefited from the scheme in 2015-16, when the largest number of hostels (23) were built after an allocation of Rs 50 crore. In 2017-18 the numbers dwindled to only four new girls’ hostel constructions and no new constructions for boys. In that year, a total of Rs 155 crore was allocated — more than in any preceding year — for improving housing infrastructure for male and female aspirants.

Moreover, the Centre remains in arrears to state beneficiaries for the years 2017-18. The department is yet to publish the annual report for 2018-19.

Meanwhile, the move to curtail student politics may pave the way for a number of private firms which seem poised to enter the promising Indian market to provide affordable rooming choices for wealthier students in urban areas, LiveMint has reported.

This, especially as, “…at 19.8 million, only China and India have more undergraduates enrolled on degree courses than America,” a Knight Frank report published this week said.

Private monitoring studies commissioned by the DoSJE are far from comprehensive though they paint a ghastly picture of the standards of living provided to students.

A 2017-18 report by Development and Research Services for DoSJE, surveyed residents of only 30 hostels in five states (Madhya Pradesh, Punjab, Odisha, West Bengal and Tripura). Two, it found, were ‘non-functional’. Of the 1,950 residents surveyed, the agency said, 58% interviewees were SC, 70% were Hindu and about 63% were from families with income below the poverty line.

The ratings were average or below average for almost every parameter including quality of mess food, cleanliness, adequate space, availability of water in toilets and bathrooms.

In short, the demand is rising and the supply remains poor in quality and quantity.

Indeed last year, agitations took place in Kolkata’s Medical College and Hospital over the living conditions at boarding facilities for trainee doctors. The protests went on for months because, students said, the official selection process for allotting rooms was not being followed.

The students cited political favouritism to cherry-pick new boarders, and alleged the authorities were using the new building as an incentive for freshers to join particular political outfits.

Senior students were thus being kept out of a new 11-floor building after having stayed in dorms for years. Ten MBBS seniors declared a fast unto death. The protesters’ prime demand — for rooms in the new building — has since been met.

Despite the differences between the Bharatiya Janata Party and Trinamool Congress, their respective governments at the Centre and state seem to be in agreement on their dislike for student unions, but for different reasons. 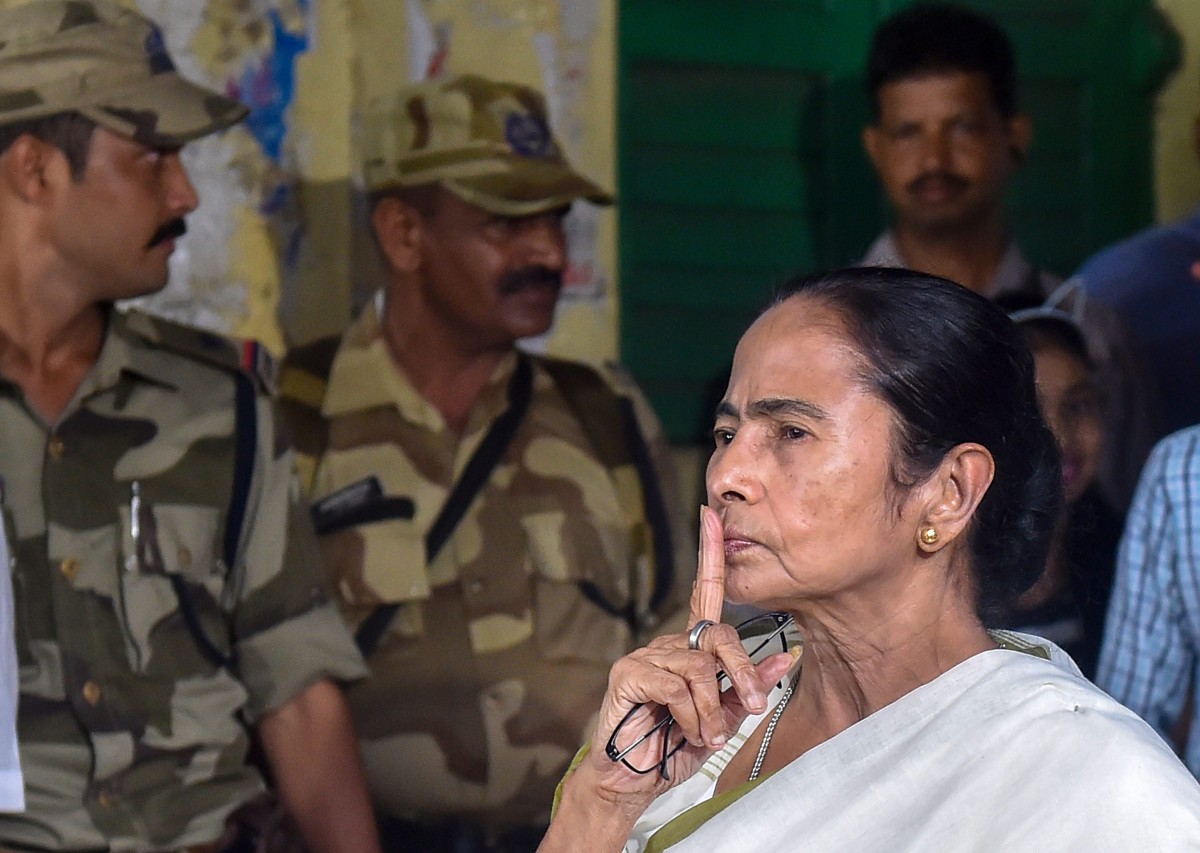 Chief minister Mamata Banerjee’s concerns have to do with the image TMC has gained due to the law and order concerns in every election, including the elections to student unions of colleges and universities. Violence before the students’ union elections in 2013 resulted in the death of a policeman in Kolkata. Last year’s West Bengal Panchayat elections and this year’s Lok Sabha elections also stood out for the high levels of violence in the period leading up to and during voting.

Chatterjee has led the charge against student unions at all institutions and says students must follow an “apolitical” model for student council elections.

In June 2017, Banerjee and Chatterjee told the press they might outlaw all political student unions and see if the system of students’ union elections followed by St Xavier’s College and Lady Brabourne College maybe implemented across colleges and universities in Bengal, The Hindu reported.

But Mamata, whose political career started in the students wing of the Congress (I) party, risks disappointing the Trinamool Chhatra Parishad’s large body of student members, even as she grapples with the BJP’s takeover of the Bengal political landscape.

But one thing that remains agreeable to both Centre and West Bengal is the real estate potential in the housing of students.

“By 2020, the Indian government wants 30% of 18 to 23-year-olds to be enrolled in higher education,” the Knight Frank report said.

“India has the youngest population in the world, with some 18% of the 1.3 billion-strong population aged 15-24 years, and the current demand for bed spaces across the country is estimated to total more than 8 million,” the report added.

While opening up the market for richer students might make fiscal sense treating poor boarders as secondary citizens is deplorable.

“We need to be told what decision making process went into this attempt to ban student politics, and what instructions have been given. All we know now is what the tone of these new rule is: ‘sign off your freedom, and any opposition to this will be termed a ‘subversive activity’,” says Prasanna.