Between Ranks and Cut-Offs, the Higher Education Admission Process Is Doing More Harm Than Good

Instead of working with the strengths of the students so that they can become the best citizen or employee they can be, we have a system that reduces students to a simple hierarchical order. 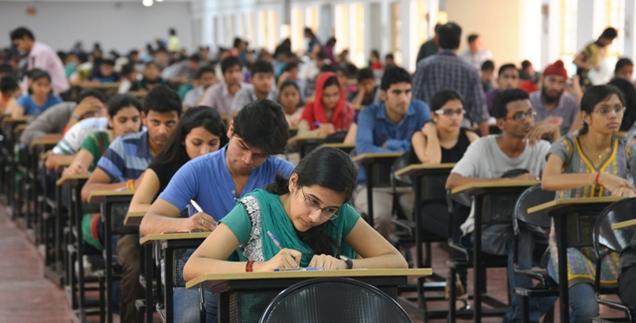 In India, the idea of ‘merit’ has become wholly linked to ranks. Credit: PTI

The city pages of every newspaper were recently filled with reports of the humiliation female students faced as they were invasively searched before the medical college entrance exam. It could be said that there is increasing correlation between the very form of the standardised exam and the humiliation.

As students and parents become ever-more desperate in the face of an impersonal, opaque system of ‘cut-offs’, rankings etc, the exam-authorities claim to come up with more technological tricks to make sure that students don’t cheat. This is a universal problem, with the advent of ever more sophisticated technologies on both ends – those that help you cheat and those that seek to prevent it.

What is lost entirely is the idea of the student as a unique individual, which should be the essence of the admission process. The ideal we should be working toward is that of the best fit of the student with the college/course – this would allow more diversity of types of colleges, as well as types of students, syllabi, faculty etc. But our current impasse is a function of pure inertia on the part of the so-called ‘best’ colleges/courses which would rather be passively measured on the higher cutoffs than actively striving to seek a distinct identity or specialisation.

It is mother’s milk for Indian colleges to always blame the regulator, but anyone paying attention would realise that this has become a convenient, all-purpose excuse. The question students and parents ought to ask the college is: What are the actual academic steps you have taken for a more personalised admission process, for grasping each student’s distinct intellectual autobiography, for matching students with updated, reflective and engaging courses? Most colleges of course don’t bother to keep their websites updated.

Instead of working with the strengths of the student so that she can become the best citizen or employee she can be, we have a system that reduces students to a simple hierarchical order, a number with a position on a list that is as ineradicable as a jail number. It is impossible for any 18-year-old to recover from the blow of being told that she is such and such a number, for that number will determine what college she goes to, and presumably what job she will get etc. Unless parents and students take an active stance against this, such blows to self-esteem simply become self-fulfilling.

A true evaluation of student merit is the opposite of all this. Instead of the drive to standardise tests, the effort should be in the reverse direction – to personalise the system to hear more voices, to not traumatise a person for life, to co-discover with the student what she can be at her best and to figure out, over the three-year period, what courses will give her the the most sustainable satisfaction.

Unfortunately, the idea of ‘merit’ has become wholly linked to ranks. This argument of merit has been used against disadvantaged classes. But equally, this idea of merit does disservice to even those who do well, for they are now at the mercy of the institution/course that their rank assigns them. Going to a ‘good’ college will be disastrous if that course is not intrinsic to her identity – but we have solved this problem by also having a hierarchy of not only colleges, but also courses (and here, the most commoditised of educations – the professional courses, come out on top).

In India, perhaps with the government decreeing the IITs, the gap between not only arts and sciences, but also between the sciences and the professional courses, was largely made permanent. The professional colleges no longer taught the humanities seriously. In the West, the core of the university was still the Arts and Sciences. Capitalising on parental panic on jobs, these colleges mushroomed, and there seemed to be one on every street corner.

Belatedly, taking their cue from abroad, professional colleges in India are now realising the value of a broad-based education. It is still not too late, as this re-marriage (after the earlier divorce) might make for a more mature partnership. Many of the most exciting frontiers of humanities research are at the cusp of the sciences – medical humanities, environmental and developmental studies, legal history etc.

It is a great loss to both the humanities and the professional student that the other disciplines are no longer in the classroom. In the US, where students have to do a full undergraduate degree before medical school, my recommendation as a humanities teacher was much sought after as it was only in the smaller classrooms of the humanities that the teacher can see the student as an individual and not just as a roll number or grade card. Besides, so many science students excelled at, and loved the humanities, even if they didn’t wish to make a career of it.

In India, the negative effects of this notion of ‘merit’ based on standardised exams and tests continues – when, some years ago, I was asked by a fund to disburse scholarships, I sought to have a system whereby people had to make presentations for their money, based on need or original projects. But I was told that this would raise unnecessary questions and the easier course was simply to look up that merit list again, and give the scholarships to a few more (so instead of 50 getting it, we could give it to ranks 50-55). In this context, neither the improving, creative student nor the administrator has agency. Since employability has anyway been made such a premium criteria, the essential real-world skill of presenting and persuading are lost if educational institutions do not encourage students to occasionally re-make their case for scholarships. A pre-defined rank again serves as the easy solution.

It is not a matter of a few institutions that might offer these options or processes or the occasional progressive comment made by some governmental planner. Rather, the planning of higher education must be re-thought from the perspective of maximising potential, beginning with the admission process. Parents, as consumers, funders and citizens must drive changes on these fronts to ensure that their children, whom they have taken much care to bring up, have the student-friendly, adaptive, diverse education system they deserve.