The book also mentions Maharana Pratap as the only "national element" who didn’t sell himself to Akbar. 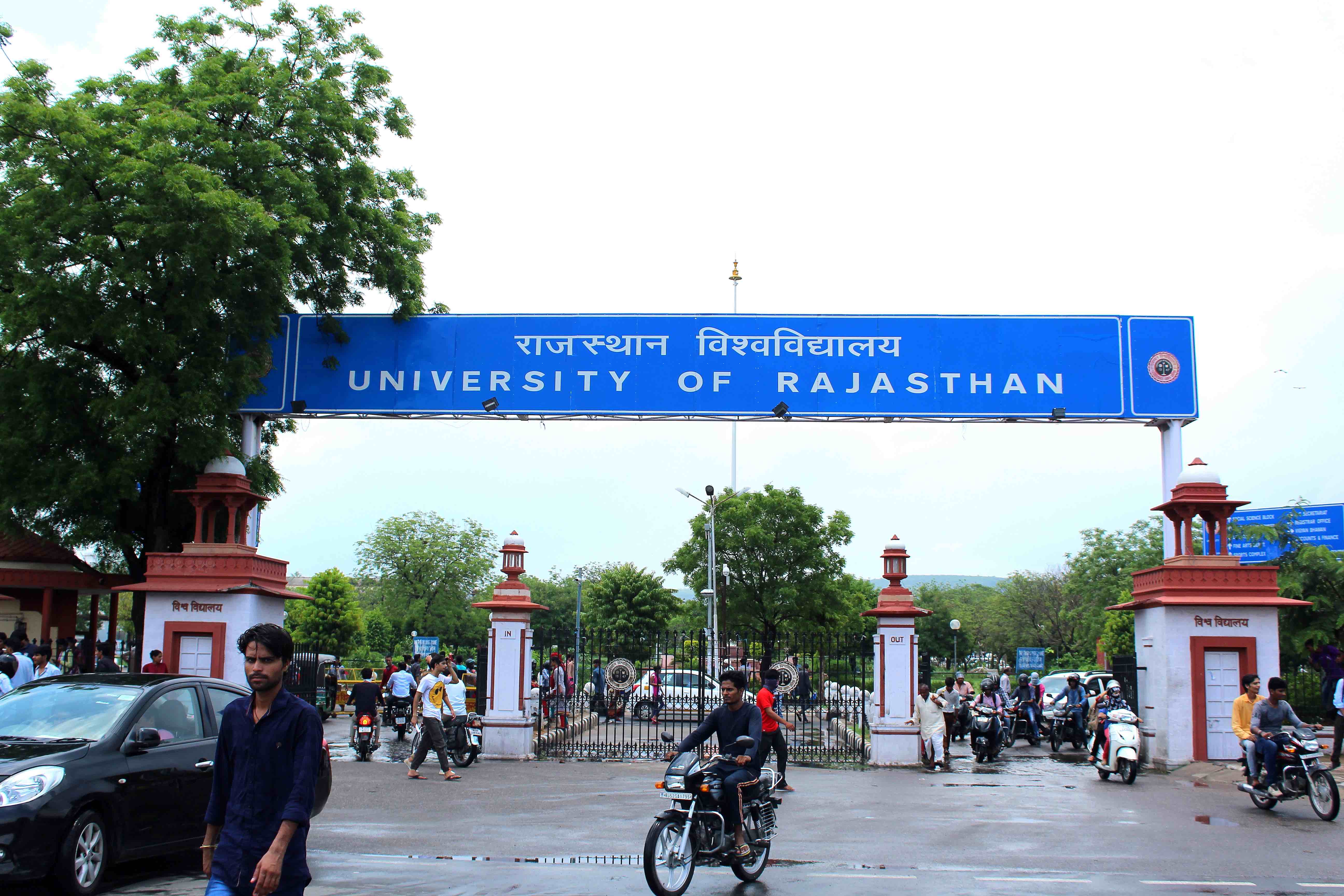 Entrance of the University of Rajasthan. Credit: Shruti Jain

Jaipur: In its board of studies meeting last month, the history department of Rajasthan University pointed out that “students need to know the latest research on Maharana Pratap and the Battle of Haldighati so they can get acquainted with various versions of the outcome of the battle.”

The compulsory paper on the history of Rajasthan, ‘Rajasthan through the ages’ being taught in the second semester of the MA history course, has a ‘debate on the outcome of the Battle of Haldighati’ as part of its syllabus. A book titled Rashtra Ratna Maharana Pratap by Chandra Shekhar Sharma that declares Pratap as the winner of the 1576 Battle of Haldighati against Akbar is mentioned in the list of recommended readings for the subject.

According to the minutes of the board of studies meeting, Professor Krishna Gopal Sharma, head of the department of history and Indian culture, who suggested the inclusion of the topic in the syllabus, appreciated the fact that Chandra Shekhar had in his book come out with a fresh review and interpretation of Maharana Pratap, projecting him as a great freedom fighter and winner of the Battle of Haldighati. 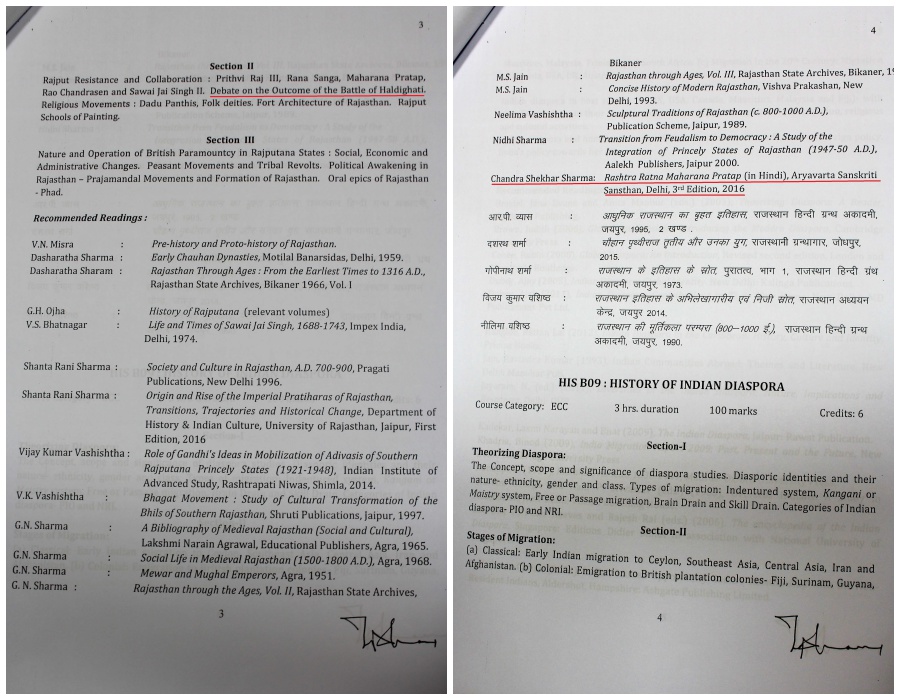 Left: MA History syllabus has a ‘Debate on the outcome of the battle of Haldighati’. Right: Rashtra Ratna Maharana Pratap is in the recommended reading list. Credit: Shruti Jain

Speaking to The Wire, Krishna Gopal said the board of studies reviews and revises academic curricula annually to make it more effective. The recommendations made by the board are forwarded to the academic council which, after consideration, sends it to the syndicate for final approval. The changes made are well thought and processed, he said. 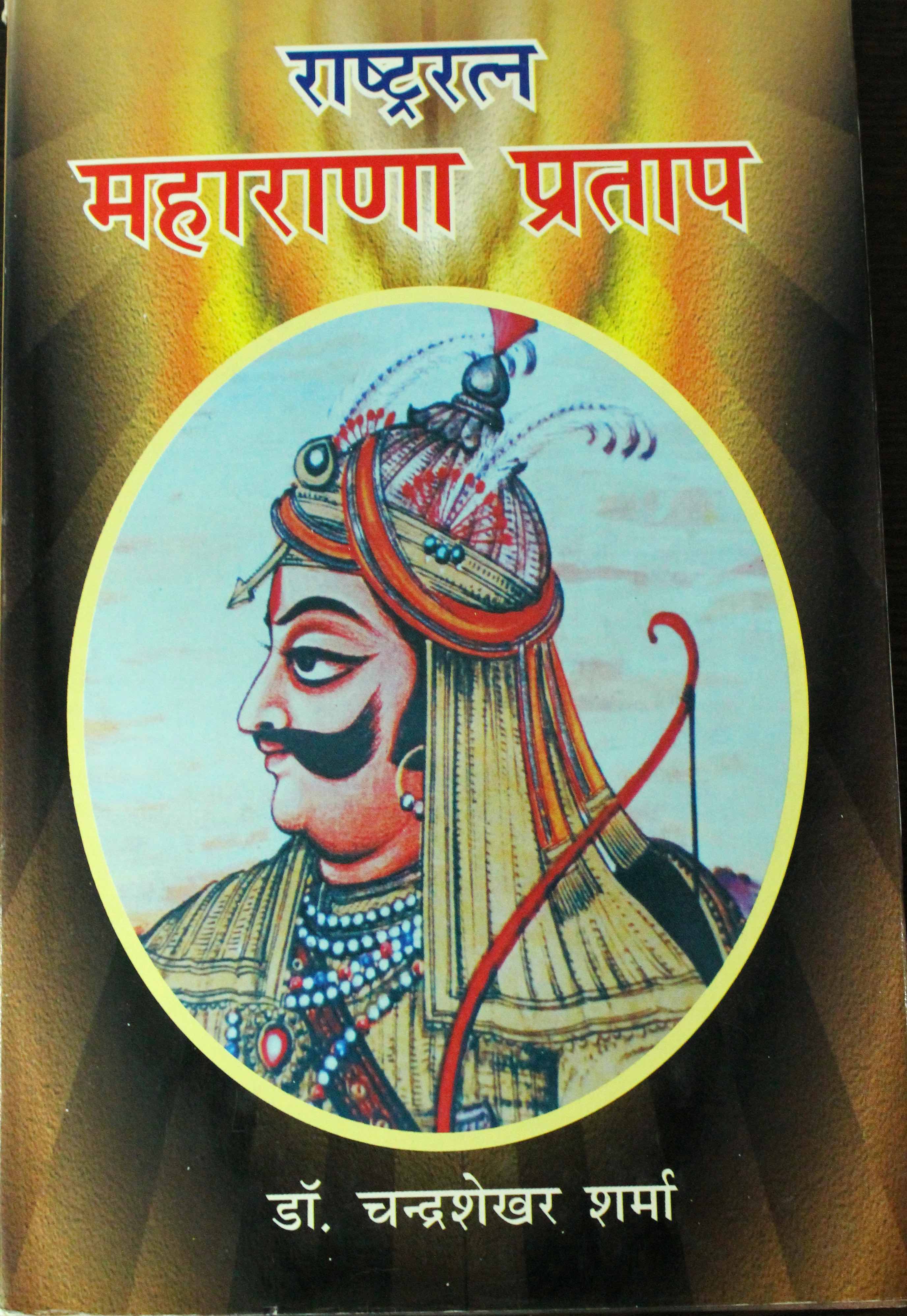 Under Section 21 of the Rajasthan University Act, two members of the state legislature, to be nominated by the state government, form a part of the syndicate. Mohan Lal Gupta, a BJP MLA from Jaipur’s Kishanpole constituency and a member of the university’s syndicate, had in February proposed to amend the outcome of the Battle of Haldighati claiming that it was won by Maharana Pratap.

“The differences over evaluation of Maharana Pratap in history are not objective; rather they are due to the conceptual relativity of the historians. Some of them consider Akbar as a great and chivalrous ruler and Maharana Pratap as harmful for the country.”

He claims that Pratap’s effective control over the plains and hilly tracts of Mewar has been deliberately neglected in the writings so far.

The book states that the Battle of Haldighati was fought in two phases. The first phase began when Pratap attacked the Mughal army near Haldighati and forced them to flee towards the banks of river Banas. The second phase was fought in Rakhtaal beyond Khamnor where Mehtar Khan stopped the Mughal army by a fake news of Akbar’s arrival. Pratap’s retreat after his horse Chetak got injured is explained as a part of his Guerrilla warfare technique.

The book raises questions over Akbar’s turning away from Mewar in 1585 AD.

“The land donations given by Maharana Pratap in Godiyana, Jadol, Sanchola and Lakhala villages prove that Pratap had an effective control over the plains after the battle.”

The narrative that during the struggle Pratap had nothing to eat and that he had to eat chapatis made of grass is demolished in the book by adding that the chapatis were made from local maize. It also attempts to demolish the fact that Akbar negotiated with Pratap for four years, by presenting accounts that showed Akbar was busy in the campaigns of Bihar, Bengal and Ranthambore.

Pratap is called a symbol of “India’s elemental spirit” to successfully fight against the world’s most powerful ruler. He is also mentioned as the only “national element” who didn’t sell himself to Akbar, implying that Akbar himself, one of history’s most celebrated Indian rulers, was not a “national element”.

Left: Points that the author feels are deliberately targeted against Pratap. Right: Text from the book questioning Akbar’s victory in the Haldighati battle. Credit: Shruti Jain

‘History being manufactured at will’

“One is getting tired of having to react to the ‘history’ being manufactured at will,” Harbans Mukhia, who taught medieval Indian history at Jawaharlal Nehru University for many years until his retirement, told The Wire. “Next in line will be that Prithviraj Chauhan actually defeated Muhammad Ghuri at Tarain but being a true and generous Hindu gave away his kingdom to Ghuri and himself took sanyas. He was captured when he was seeking alms!”

“We know that history always has a contemporary relevance and therefore keeps evolving,” said Mukhia. “But here there is utter contempt for history and its facts; all that matters is how brazenly illiterate politicians can dictate to academics and how comfortable the academics are with the diktats.”

Confusion among the students

The latest changes in the curriculum have left the students confused. “In school, we were taught that Akbar won the battle and now we are being taught that he was defeated. We don’t care who won but will have to write what is taught in order to get good marks,” said Sunita, a student who is enrolled in the MA history programme of the university.

“History is the only subject that is debatable. Students must learn to question,” Sangeeta Sharma, one of the members of the board, told The Wire.

“Earlier, there was no focus on the outcome of the battle. We only had a detailed introduction of Maharana Pratap in our course. Instead of a debate, these changes are leading to confusion among students,” said Mahendra Malviya and Ramesh Piprali, final year students of the course.

Under the Vasundhara Raje-led BJP government in Rajasthan, class X and XII textbooks of the Rajasthan Board of Secondary Education were recently revised to glorify the Modi government and propagate the Bhartiya Janta Party’s Hindutva ideology.

History was rewritten to sideline Jawaharlal Nehru and Mahatma Gandhi and focus on Savarkar. The role of Congress in the freedom struggle was also shown in poor light claiming “elite Congressmen wanted to prolong British rule in India”. Years ago, the state education department had eliminated the suffix ‘Great’ from Akbar’s name.