What Makes the Public University Anti-National?

An excerpt from 'The Idea of the University: Histories and Contexts' and 'The University Unthought: Notes for a Future'. 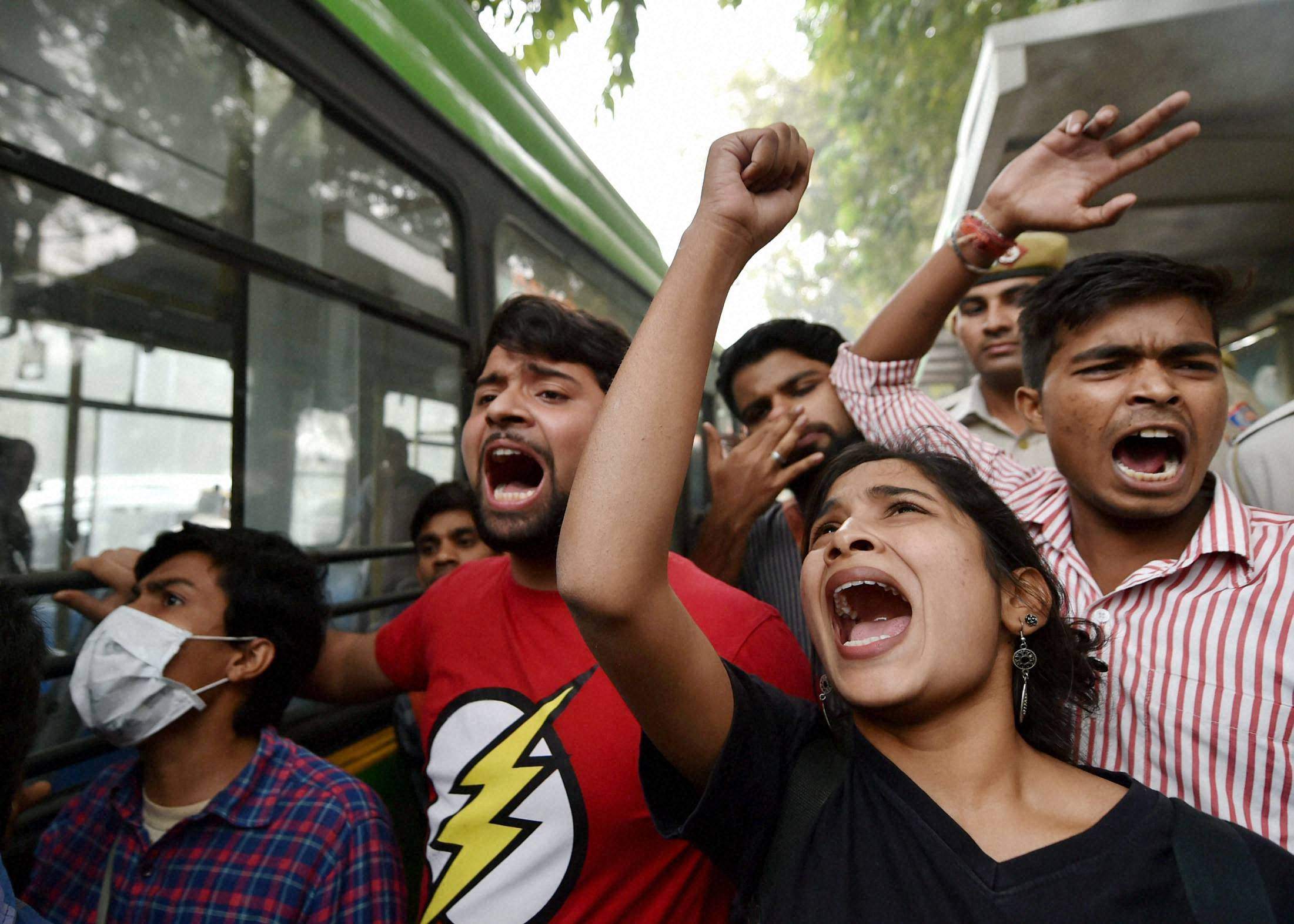 Members of AISA and JNUSU shouting slogans during their protest in New Delhi. Credit: PTI

Extracted from The Idea of the University: Histories and Contexts and The University Unthought: Notes for a Future, edited by Debaditya Bhattacharya, Routledge, 2018. The first volume in this two-part archive on the university surveys over two centuries of university reform, including the origins of the modern European university, its Indian imports in the colonial context, post-independence policy directions, provincial trajectories of state universities and the impact of state politics on higher education.

The second volume follows up on the contradictions that steer the transition of the university from a liberal consensus to a neo-liberal compromise, in the global political economy of higher education. In this, it seeks to pitch the question of the university’s ‘use’ on an alternative register.

The present as paradox?

With the recent electoral rise of the Hindu Right in India, the sustained assault on public universities in the name of their being ‘anti-national’ or ‘seditious’ spaces is in fact an accurate instance of how transnational economic designs are executed under the guise of an aggressive cultural nationalism. It is no paradox that universities are being used as a site for manufacturing a certain hegemonic consensus, because that has historically been their function as part of a bourgeois public sphere. Insofar as they are made to foist an immanent fantasy of the ‘national’ as imaginative test of loyalty and precondition of citizenship, the calculated jingoism of Hindutva disavows the public good of higher education as ranged against the funding state and therefore better left to global forces of competition. 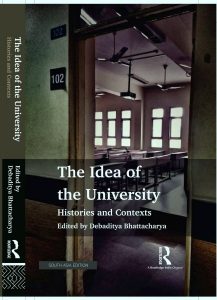 The Idea of the University: Histories and Contexts, edited by Debaditya Bhattacharya, Routledge, 2018.

The populist narratives played out by the public media around how such institutions contribute to a ‘waste’ of taxpayers’ money and must therefore be shut down, coupled with the government’s active attempts to scrap research fellowships or increase teaching workload or cut down teaching jobs in public institutions, explain the policy underpinnings of the contemporary moment.

An explanatory anecdote from recent history might serve to put things in perspective here. For the second year in a row in India, the National Institutional Ranking Framework (NIRF) – an annual audit-mechanism for rating ‘performance’ of higher educational institutions, as empowered by the Draft Educational Policy 2016 – ended up ensconcing as the ‘best’ those same universities which have routinely and spectacularly incurred the ‘nationalist’ wrath of the current government. For example – IIT Madras, the identified precursor to the rhetorical monstrosity called the ‘anti-national’ through an attempted de-recognition of a student study-circle in early 2015, was granted the topmost position among engineering institutes.

Much in the same vein, Jawaharlal Nehru University (which saw the arrests of student-scholars on trumped up charges of sedition) was named second, Jadavpur University (which continues to witness orchestrated clashes by right-wing lumpen elements) was ranked fifth, Hyderabad Central University (which drove an institutionally boycotted Dalit scholar to suicide on provocations of ruling-party legislators) came seventh, and Delhi University (which recently flashed up scenes of violent assault and vandalism in response to an academic seminar) was rated eighth among all universities.

Also Read: I Was Forced to Quit JNU After Being Denied Salary for Ten Months

The simultaneous branding of dissenting spaces as the ‘best’ institutions of the country and by the same government that persecuted them – though seemingly rife with contradiction – is actually united in terms of policy intent. This sudden deluge of accolades for those perceived as “rogue” institutions – through highest-ever NAAC ratings, Visitor’s Awards, National Board of Accreditation (NBA) approvals and NIRF laurels – begs being read in the light of possible futures charted by the T.S.R. Subramanian Committee Report on New Education Policy (2016). Section 7.5 of the Report, while lauding the “initiative recently taken to rank top Universities in the country”, hints at the exact policy implications of ‘high ratings’:

On the upper end of the scale, A or I represents the best in its class in India. The institutions in this bracket would have total autonomy in all respects, including fixing faculty salaries, fee structure, entering into collaborations, etc. . . . In other words, there shall be a direct positive correlation between the quality of institution and the grant of autonomy, along with which there will be collateral responsibility to sustain that quality.

The ideological scourge of the ‘anti-national’ is finally legitimized through its coincidence with the NIRF’s glorious mandate, and in the process paving way for a delinking of the ‘best’ institutions from state financial support.

Early in 2018, the Human Resource Development (HRD) minister’s ceremonious anointing of 62 of such ‘best’ higher educational institutions as deserving of complete autonomy – whereby, they might open new courses or departments or off-campus centres at will, run short-term certificate or skill-based programmes, hike student fees, enter into private partnerships, admit foreign students and recruit foreign faculty at higher salaries, on the sole condition that “no demand for fund is made from the government” – makes policy into a consummate tool of avenging public education for ideological non-compliance. The impoverishment of revenue for ‘performing’ institutions is made part of official policy through an imminent push towards self-financing measures, and the seat cuts in JNU or the proposed 1100 percent fee-hike in Panjab University (PU) are but underwritten as natural policy outcomes for seditious spaces. 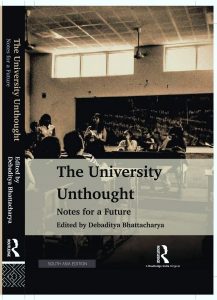 The University Unthought: Notes for a Future, edited by Debaditya Bhattacharya, Routledge, 2018

Drafting a manifesto for an ‘other’ public university requires us to move beyond rehearsed idioms of despair and defence. The surviving variety of opposition directed at the repressive neoliberal university has, across contexts, taken recourse to a nostalgia for its liberal past. The progressive intellectual response – couched in demands for freedom, ‘reasonableness’ and a return to the welfare model – is framed in a constitutional resort to rights discourses and the tenets of liberal humanism.

There is a consequent romanticization of the elite humanist quest for truth as an internal condition for democracy, and in the process liberalism is peddled as the political laboratory of social justice. The structural exclusions repeated by centuries of national-bourgeois hegemony are wished away through ‘apolitical’ fantasies of the welfarist state, and the university’s own legacy of class solidarities is left untouched by the charge of historical injustice. Forms of resistance, in their easy preference for nostalgic essentialisms about a not-so-distant past, remain far from challenging status quoisms that have made the university live out its own dangers.

This anthology argues that a politics of the university’s future must necessarily begin from a premise of self-critique. The traditions of liberal wisdom and economies of meritocratic access and social privilege that the ‘idea’ of the university has instituted in a relationship of narcissistic self-absorption must, by default, become the conditions of thinking its own political future.

Public discourse about the university needs to exceed the enchantments of a self-image, especially when infrastructural networks of knowledge-dissemination have always been sites of reproducing relations of power – between the caste-elite male and the subaltern, the global-metropolitan and the suburban-rural, the exact sciences and philosophy, the intellectual and non-intellectual communities of labour. The task of progressive politics is to work the question of access into an awareness of the class, caste and gendered nature of all levels of education, without mystifying the university as an achieved idea of freedom.

Debaditya Bhattacharya teaches literature at Kazi Nazrul University, West Bengal. He has previously taught at central as well as state universities and colleges in Delhi, Bihar and Bengal.