The Anatomy of a Leaked Paper: Protests Against Alleged Scam in the SSC Exams Snowball

Students are alleging that mass cheating occurred during this year's SSC exams, which are conducted to recruit non-gazetted staff for various ministries, and are demanding a CBI inquiry.

Half of India’s 1.3 billion people are below 25 and two-thirds are under 35. And they are desperately looking for jobs. Credit: Valay Singh The SSC scam comes as a big blow to the Modi government’s stated promise of transparency in government recruitment and job creation. Credit: Valay Singh

New Delhi: Days before the resumption of the Budget session of parliament, hundreds of candidates continued their protests for the third straight day at the Staff Selection Commission (SSC) headquarters at Lodhi Road in New Delhi. The candidates are demanding that a Central Bureau of Investigation (CBI) inquiry be held into the alleged leak of the examination paper for the Combined Graduate Level Examination (SSC CGL Tier II Exam 2018) held on February 21.

The SSC conducts examinations to recruit non-gazetted staff for various central ministries and sub-ordinated departments. Every year, lakhs of aspirants sit for the multitude of exams held by the SSC in the hope of securing a stable government job. Some of the posts for which exams are conducted include lower division clerks, stenographers of the central secretariat stenographers service and equivalent grades of Indian foreign service, central excise inspectors, income tax inspectors, and sub-inspectors in the CBI and central police organisations.

This year, 1, 89,843 candidates appeared for nearly 9,372 vacancies to be filled under the SSC CGL Tier II exam that were held between February 17 and February 22. While the exams in 206 centres were conducted without any incident, in Delhi, the SSC cancelled the second shift of the exam on February 17 at a exam centre called Animate Infotech. 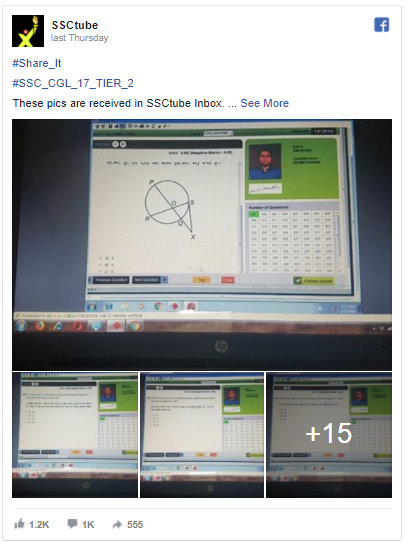 The papers reportedly found their way on to social media.

Subsequently, the SSC also cancelled the exam held in the morning shift on February 21 after screenshots of the question paper along with answers were found circulating on social media. The SSC has announced that this exam will be re-conducted on March 9, but the candidates are alleging ‘mass cheating’ and want nothing short of a CBI inquiry.

The SSC examinations are conducted online in select centres picked by the SSC. There is stringent security inside the centres and neither candidates nor invigilators are allowed to carry phones or watches. A candidate is provided a rough-sheet and answer sheet while the question paper is accessible through a computer. Given such tight security the sudden appearance of screenshots and phone-photos of questions tipped over the resentment among candidates.

At the protest, Ambuj Kumar, a B.Sc. graduate from Delhi University, said, “There are many issues with the way SSC conducts examinations. It is the only exam in the country in which marks are not normalised. But, this time, the way exam papers have been leaked along with other malpractices that have come to light, we feel that protesting is the only way to make our voices heard.”

On spotting a SSC staffer looking down at the protesters from the high-rise that houses the SSC office, the crowd erupted with slogans of “we want justice” and “we demand a CBI inquiry”. There was visible anger against media outlets among candidates, both at the venue of the protest and on social media.

“We are peacefully protesting here for our legitimate demands of a CBI inquiry, but so far, only a couple of media houses have bothered to speak to us. The media, which has time for protests linked to a movie and the death of Sridevi, seem to have no concern for us – the youth of the country,” said Dilip Singh, who has slept at the protest site for the last two nights.

Given the massive number of applicants each year, the SSC has to conduct the exam in multiple shifts staggered over several days. The variance in the difficulty level of questions asked in each shift is expected and applicants are aware of it. Exams for the UPSC, GATE, SBI and CAT, among others, are also held in a similar way. But the crucial difference is that the UPSC, CAT and other exams ensure that the different difficulty levels of questions papers are adjusted so that all candidates have an equal chance of getting selected.

“We don’t understand the government’s resistance to normalisation of SSC exams. Is this government’s way of saying that only if we are lucky and we get an easier question that we will be selected, that merit is secondary to luck?” Sanjay Azad, another protestor asked. 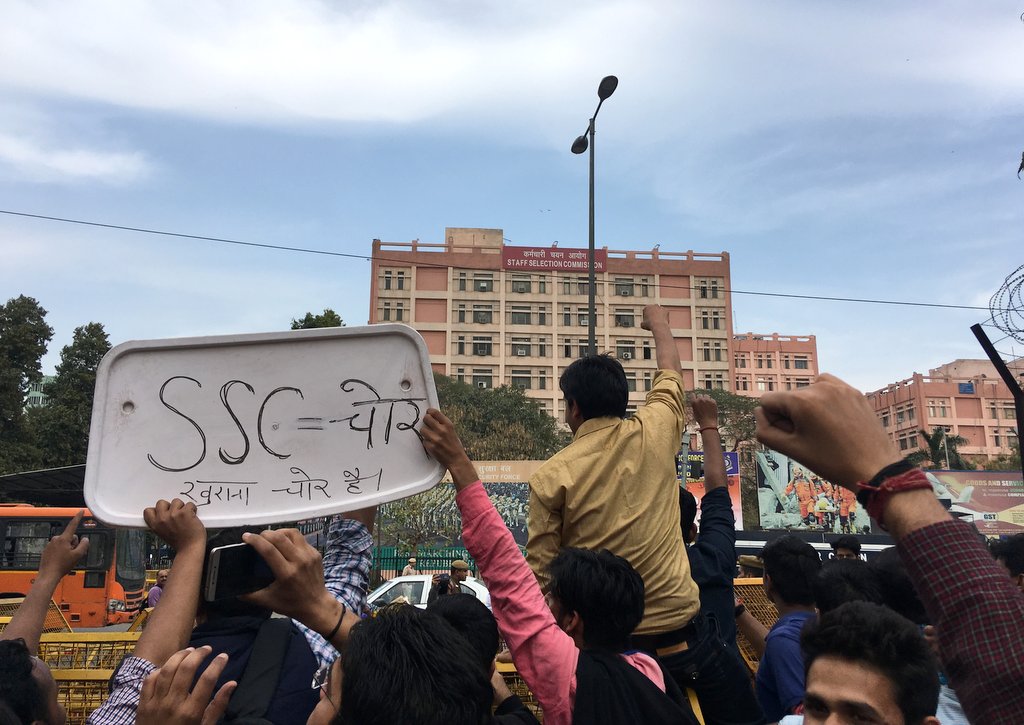 Corruption in SSC recruitments is not a new allegation. Credit: Valay Singh

Normalisation in SSC exams has been a long-pending demand. Last year, some applicants had approached the Central Administrative Tribunal for issuing directions to SSC to suspend all exams till a decision had been taken to include normalisation, but their appeal was dismissed on technical grounds.

For Ankita, who lives in Mukherjee Nagar, Delhi’s hub of coaching centres where thousands of young aspirants flock annually in the hope of clearing exams like the ones conducted by SSC, the whole debacle has been a hard pill to swallow.

“I live in a window-less room, eat food which is fit for a prison and somehow manage to focus on my studies. It is enraging to see that the question papers for such exams are being leaked by somebody within the SSC. Does our hard-work have no value in the eyes of the government? Without corruption how is it possible that questions are being leaked?” she asks.

Ashim Khurana, the SSC chairman, has so far held at least three meetings with delegations of aspirants and has asked them to produce evidence of a leak.

According to a statement issued by his office on the SSC website, the candidates, “…were informed that on receipt of such evidences, the Commission would, in consultation with the DoPT, refer the matter to be enquired into by an independent investigating agency”.

However, the candidates claim that the chairman has only conceded to the setting up of a Special Investigation Team and not a CBI inquiry. The SSC chairman, in another statement, sought to deflect the allegations. The statement alleged that the protest are “…being actively instigated and sponsored by two coaching institutes/ agencies with vested interests.”

The candidates dismissed these charges and said that this is an attempt to divert attention and a cover-up to hide the massive corruption that plagues the SSC. “We are here despite it being Holi, many of us were supposed to go home but have decided to stay back for the protests. Our only demand is that a CBI inquiry by constituted so that the truth can come out, if there is nothing to hide, why oppose it?”, said Smriti who hails from Meerut.

Corruption in SSC recruitments is not new and every time it has surfaced, the matter has been brushed under the carpet by successive governments. Just last week, Sudhir Kumar, chairman of the Bihar Staff Selection Commission (BSSC) was arrested in a connection with similar allegations of question paper leaks in the recruitment of grade-three clerical positions.

Against the backdrop of rising unemployment (31 million) in India, the SSC scam comes as a big blow to the Modi government’s stated promise of transparency in government recruitment and job creation. It also doesn’t bode well for the BJP as it prepares for elections in major states like Rajasthan, Madhya Pradesh and Karnataka along with the Lok Sabha elections due year. Its promise of a clean and corruption free government finds no takers among the hundreds of candidates who, in continuation of their protest, will spend yet another night outside the SSC office just kilometres away from the Prime Minister’s residence in New Delhi.

Valay Singh is a Delhi-based writer and photographer. He tweets @gaonwalah.