Bhattacharyya had recently lodged a complaint against the appointment of professor Bondhirupa Sinha. 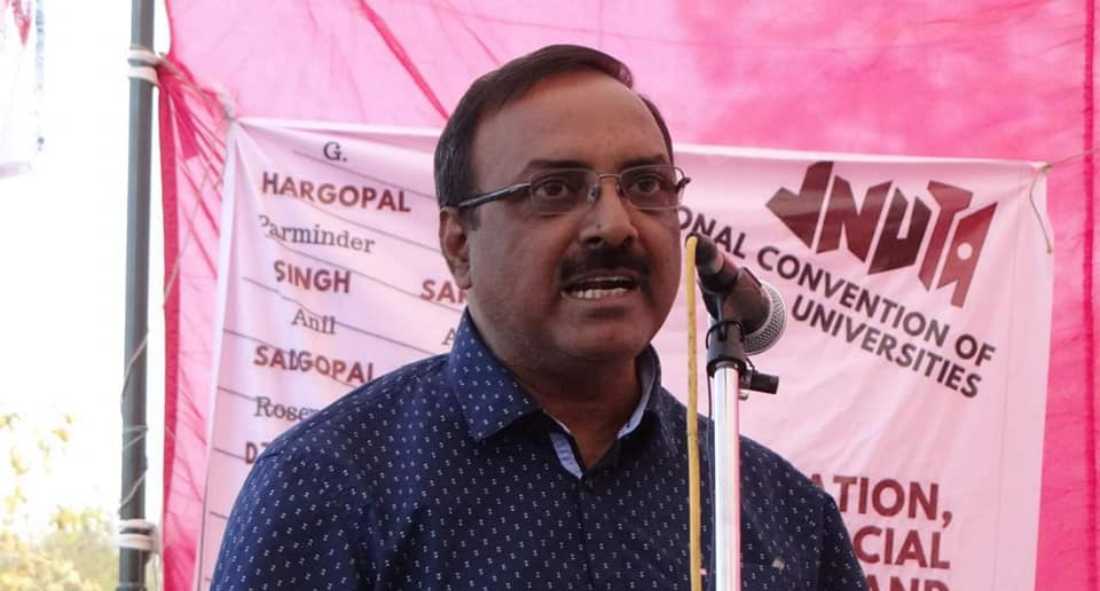 Kolkata: Visva-Bharati on Thursday suspended Sudipta Bhattacharyya, an economics professor, allegedly because of the prolonged ‘political differences’ between him and the vice-chancellor, Bidyut Chakrabarty.

In the official suspension letter, the university stated that the executive council suspended Bhattacharyya for ‘prima facie’ engaging in ‘misconduct’ by mass circulating a complaint against a fellow employee and also forwarding copies to high dignitaries by e-mail.

Sources close to Bhattacharyya told The Wire that he recently lodged a complaint against the appointment of professor Bondhirupa Sinha, who is currently the principal of Patha Bhavana. Bhattacharyya had addressed the complaint letter to VC Chakrabarty with copies to the varsity chancellor (Prime Minister Narendra Modi), varsity’s visitor (President Ram Nath Kovind), varsity’s rector (Governor of West Bengal) and the University Grants Commission chairman.

Bhattacharyya received information regarding Sinha’s appointment by filing a right to information application with the university. Finding irregularities and procedural lapses, Bhattacharyya wrote a complaint, said a source.

Another professor of Visva-Bharati, on condition of anonymity, told The Wire that Bhattacharyya is popular among the students and at times showed solidarity with their movements against the vice-chancellor’s stance. “He is always vocal on various socio-political and socio-economic issues. He highlighted the irregularities and unilateral decisions by the university administration. Hence, he is the target.”

Soon after Chakrabarty was appointed vice-chancellor, the university released an order which barred professors from speaking to the press on any issue. This is why no university professor is willing to openly speak to the media.

The Visva-Bharati University Faculty Association, of which Bhattacharyya is the president, challenged the gag order and filed a case in the Calcutta high court. The case is currently sub judice.

The professor told The Wire that Bhattacharyya was penalised for the role he played in bringing to the fore how the VC had insulted Nobel laureate economist Amartya Sen. “Professor Bhattacharyya has written to Professor Amartya Sen to apprise him of the allegations levelled against him by some in the university administration.” Things started escalating since then and on January 7, Bhattacharyya was given the suspension letter.

A controversy erupted in late December, when the media reported that the central university has written to the West Bengal government alleging dozens of land parcels owned by it were wrongfully recorded in the name of private parties, including Sen.

Responding to the allegation, the noted economist said the vice chancellor of the hallowed institution has issued “false statements” to the media. “I am baffled by the way the Visva-Bharati VC is doing these very odd things, such as making false statements to the media about me allegedly occupying their land but never writing to me about returning any land to them. I am not sure if the VC is, what can I say, intellectually well-coordinated,” he said.

Chief minister Mamata Banerjee had offered an apology to Sen on behalf of the state and also wrote to him, asking him to consider her a “sister and friend” in his war against “intolerance and totalitarianism”.

In a short email, Sen replied to Banerjee saying, “I am very happy indeed to get your supportive letter. I am not only most touched, but also very reassured that despite the busy life you have to lead, you can find time for reassuring people under attack. Your strong voice, along with your full understanding of what is going on, is, for me, a tremendous source of strength.”

Recently from a rally in Shanti Niketan, the Trinamool Congress supremo launched a direct attack on VC Chakrabarty and called him a ‘BJP man’ who is destroying the rich culture and heritage of the institution. “I feel bad when I see efforts being made to drag down Visva-Bharati University to nurture communal politics,” Banerjee added.

Bhattacharyya received his doctoral degree from Jawaharlal Nehru University and has been teaching at Visva-Bharati since 2001.