After BHU students held a protest, both Reliance and the university denied that any decision had been taken on offering Nita Ambani a position. 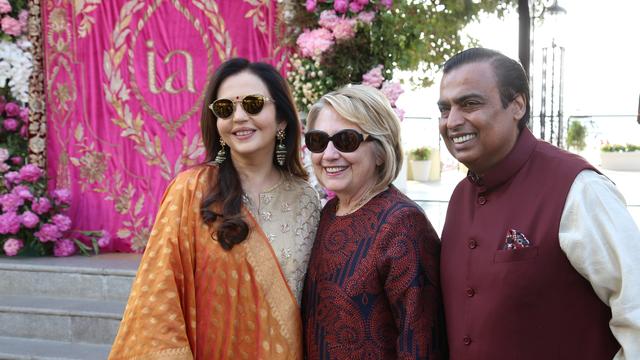 Former US secretary of state Hillary Clinton poses with Mukesh Ambani, Chairman of Reliance Industries, and his wife Nita Ambani after her arrival in Udaipur to attend pre-wedding celebrations of their daughter Isha Ambani in Rajasthan, India, December 8, 2018. Photo: Reliance Industries/Handout via Reuters

Reliance Industries has denied news reports of receiving any proposal inviting Nita Ambani to be a visiting faculty at the Benaras Hindu University (BHU). A RIL spokesperson told BOOM that the news reports are “fake” and an official release from the university also denied that it had given “an administrative order to appoint” Ambani.

Meanwhile Kaushal Kishor Mishra, dean of the social sciences department which is said to have invited Ambani, told BOOM that he on behalf of the department had sent a proposal invitation, also adding that they even received an acknowledgement about the same.

News that Ambani, the founder of Reliance Foundation and wife of industrialist Mukesh Ambani, will be teaching at the BHU’s Centre for Women’s Studies and Development run by the Department of Social Sciences was reported widely by media outlets. The Free Press Journal and Jagran reported that the proposal had been verbally accepted by Ambani and the university was awaiting a detailed written confirmation. The media reports said, “The BHU authorities are eagerly awaiting a written acceptance to schedule her lectures for the benefit of girl students in the department.”

Refuting the news reports, a Reliance Industries spokesperson said, “Reports that Nita Ambani will be a visiting lecturer at Banaras Hindu University are fake. She hasn’t received an invitation from BHU.”

Following the viral reports, over 40 university students staged a protest in the campus, outside the residence of Vice-Chancellor Rakesh Bhatnagar against the decision to appoint Ambani as visiting faculty. Speaking to BOOM, one of the protesting students, Shubham Tiwari a research scholar said, “We read news reports about the appointment and thought it was not right that someone who has not played a big role in the upliftment of the country or made a mark for herself by her own talent or hard work should be teaching students.”

When asked whether they were sure that the department of Social Sciences did indeed send a proposal to Ambani for the position, Tiwari said, “We held a meeting with the department head Kaushal Kishore Mishra about the same and he confirmed that he had sent an email inviting Ambani and also received a reply. But the Vice Chancellor and his office said they did not have a clue about this. That angered us even more that a department took the decision of hiring a visiting faculty without even consulting the university head or the students of the department.”

A report by the Jagran on March 14 has a copy of the proposal sent by the social sciences department to Ambani. The offer letter addressed to Ambani herself reads, “You are such an inspiring and motivating icon for the whole womenfolk that the Benaras Hindu University would feel privileged by honouring you as Visiting Professor in Centre For Women’s Studies and Development. Your entrepreneurship experience, concern for social issues, sympathy for girls and women would definitely and highly motivate the girl students in the region of Purvanchal of Uttar Pradesh.” The letter signed by Nidhi Sharma, Coordinator for the women studies centre and Kaushal Kishor Mishra, Dean of the Social Sciences department further adds, “…I request you to accept our humble offer of visiting professor…”

The BHU public relations officer Chander Shekher Gawri tweeted an official statement from the university. The statement in Hindi said, “No official decision has been taken by the University Administration nor any such administrative order has been given to appoint Mrs. Nita Ambani as a visiting professor in any Faculty Department Center of the University or to give any responsibility of teaching.”. The statement further added, “Be it known that the appointment of a visiting professor at Kashi Hindu University requires the approval of the competent authority. In this case neither such approval has been given nor any such proposal has been presented for consideration before the competent authority.”

With reference to media reports claiming that Mrs. #NitaAmbani is set to become a visiting professor in Centre for Women’s Studies in Faculty of Social Sciences, #BHU, the university has made it clear that it has not taken any official or administrative decision in this regard. pic.twitter.com/PnsENCoAAa

Earlier in the day, BOOM reached out to Mishra, dean of the social sciences department who confirmed that they had sent a proposal inviting Ambani to be a visiting faculty member. Mishra said, “We sent an email to Reliance and even received an acknowledgement reply from them. The reply among other things said, “Thank you for the proposal inviting Nita Ambani.” I have no clue why they are denying it or calling it fake.”

While Mishra earlier agreed to share with us the email with the invitation and the alleged reply from Reliance, he later refused. “We have been asked by the University to not talk about this anymore with anybody and to refrain from sharing any more information.”

BOOM got a copy of the email acknowledgement received by the department, from a source, which shows that the reply was an automated response and not a formal response from the company. The email reply is from the id “contactus@reliancefoundation.org”, the same email mentioned on the website’s contact us page. The reply reads, “Thank you for your interest in Reliance Foundation. We make every effort to review each request that is submitted to us. But because of the high volume of emails we receive, we may not be able to respond directly to each query.” The reply further adds, “This is an automated response. Please do not reply to this email.”

Below is a photo of the same: Mishra was not available for further comments following the university’s official statement.

This article was originally published on Boom Live.