These deletions from the Class XII textbook are among the series of other prominent removals and revisions – including the 2002 Gujarat riots, Emergency, Jawaharlal Nehru’s vision of building dams, sedition law, and Naxalism – in NCERT textbooks. 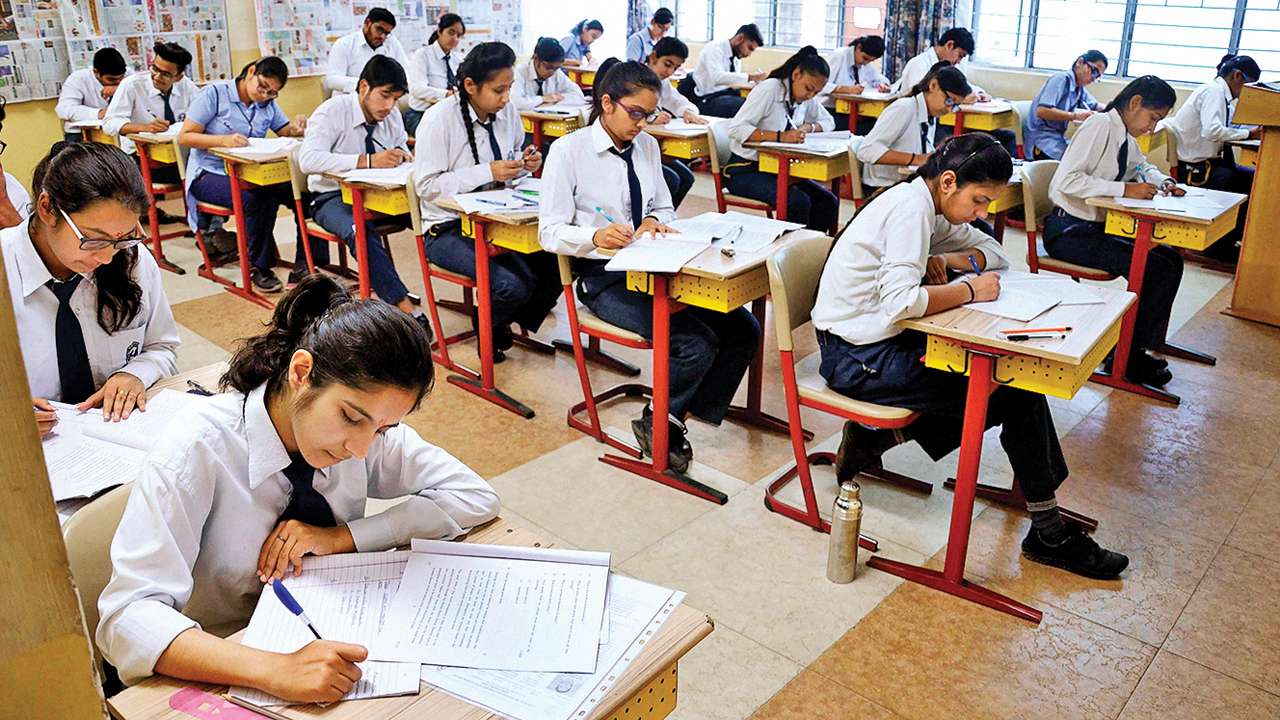 Mumbai: To “rationalise the content” of the National Council of Educational Research and Training (NCERT) and “lessen” the content load on students post COVID-19 pandemic, the NCERT’s expert panel has dropped several radical mentions of caste, anti-caste movement and literature from the textbooks. These deletions are among the series of other prominent removals and revisions – including the 2002 Gujarat riots, Emergency, Jawaharlal Nehru’s vision of building dams, sedition law, and Naxalism – in NCERT textbooks.

The Sociology textbook of Class 12 remains one of the most altered among all. The earlier textbooks – which had several chapters on the caste system, its impact in the past and contemporary India – have seen some of the most crucial historical aspects of the anti-caste movement being removed. For instance, ‘The Cultural Change’ chapter in the Sociology textbook of Class 12 has dropped the mention of 13-year-old Muktabai and her radical poem rejecting the Hindu religion.

Muktabai or Mukta Salve belonged to the Dalit Mang community. She was one of the first few students of Jyotiba Phule and Savitribai Phule. Barely in her teen, Salve wrote:

Where only one person is privileged

And the rest are deprived

Perish from this earth

And let it never enter our minds

To be proud of such a religion…

Salve’s poem is mentioned in the textbook as an example of “yet another view increasingly voiced by Dalits was a complete rejection of the Hindu fold”.

The deletion was carried out following the directions given in December last year by the then NCERT director Sridhar Srivastava, who felt, “In view of the COVID-19 pandemic, it is imperative to reduce the content load on students.”

In another chapter titled, “Caste Based Movements”, mention of both Phule and B.R. Ambedkar – the two pioneers of the anti-caste movement – has been dropped. The three fat paragraphs are in the original chapter mentioned under the “exercise box” for students, talk of the anti-Brahmin movement of Maharashtra and Tamil Nadu. The chapter begins with one of the Marathi songs from the 1970s that sociologist and anti-caste crusader Gail Omvedt had translated for one of her essays Ambedkar and After: The Dalit Movement in India.

The sun of self-respect has burst into flame

Let it burn up these castes!

These walls of hatred.

Crush to smithereens this eons-old school of blindness,

The chapter earlier encouraged students to engage with anti-caste writings by discussing poetries and songs of “Dalit writers”. These activities have also been dropped from the textbook now.

With the recent deletions, the panel also attempts to downplay the existence of caste and its impact on contemporary society. Some of the most relevant discussions around ‘caste panchayats’ have been dropped in their entirety.

Under the sub-chapter ‘Democratisation and Inequality’, the existence of caste panchayats was discussed in detail in the earlier textbook. Citing one of the newspaper articles of 2004, the chapter recalls an incident of Rathi Khap panchayat in Asanda Village of Jhajjar district where a woman named Sonia was ordered to dissolve her marriage, abort her unborn child and accept her husband as a brother if she wished to live in the village. She was punished for marrying within the same gotra (lineage). Similar caste panchayats among the Muslims were also discussed in the chapter. The part has been entirely dropped.

Interestingly, it is not just the mention of caste atrocities and cases of discrimination that is being dropped from the text. A section in the textbook dispassionately engages with the upper caste anxieties around caste. “The increasing visibility of both Dalits and other backward classes have led to a feeling among sections of the upper caste that they are being given short shrift,” the section begins. “As sociologists, we need to recognise that such a ‘feeling’ does exist, and then we need to scrutinise to what extent such an impression is grounded on empirical facts. We also need to ask why earlier generations from the so-called ‘upper castes’ did not think of ‘caste’ as a living reality of modern India?” the chapter further explains. 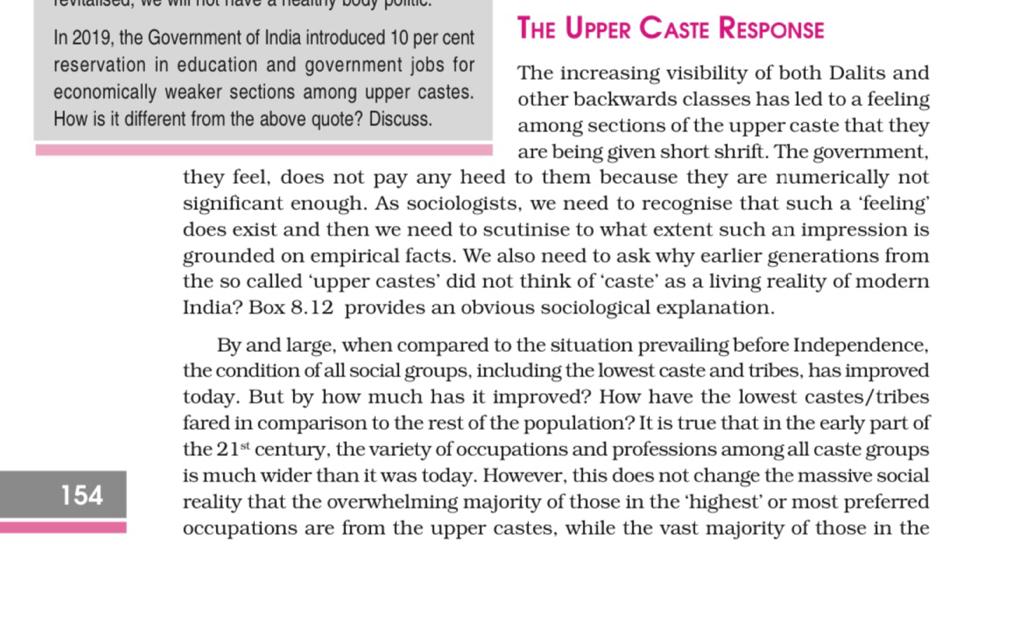 The only mention of the Pardi community, one of the most marginalised denotified tribes, has also been removed from the Sociology textbook of Class 12. Under the chapter ‘Social Movement’, while discussing the features of social movement, the speech of rights activist Ankush Kale is mentioned.

Kale, born into a Pardi household, says, “The Pardis are very skillful hunters. Yet society recognises us only as criminals….Our community has to undergo police torture under the charge of theft. Whenever there is a theft in the village, it is we who get arrested. The police exploit our womenfolk and we have to witness their humiliation. Society tries to keep us at a distance because we are called thieves. But have people ever tried to give us a thought? Why do our people steal? It is this society that is responsible for turning us into thieves. They never employ us because we are Pardis.”

The poignant observations made in Kale’s speech are reflective of the condition in which the community continues to live. However, the revised textbook has deleted the only mention of the denotified community from the syllabus.

Mention of bonded labour work and the implications of caste practice in Gujarat have conspicuously been dropped from the textbook.

Several parts from the chapters discussing the Indian democracy, the preamble, and the constituent assembly debates have also been either deleted or condensed. An entire part discussing the struggles to get the OBC reservation has been dropped. The deletions have been made on the ground that similar topics have been covered in Political Science textbooks of other classes.

After Srivastava set up a panel for the entire exercise of “rationalisation”, the new NCERT director Dinesh Prasad Saklani took charge in February this year. In his response to The Indian Express, Saklani said, “The entire (textbook rationalisation) exercise was completed before I took charge. So, I cannot comment on the nitty-gritty of it.”

Also read: The Cuts From NCERT History Textbooks Are Symptomatic of a Larger Malaise

Sedition: Under chapter ‘Understanding Laws’ in the Political Science textbook of Class 8, sedition law is cited as an example to discuss the arbitrariness of colonial laws. The section has been dropped. Besides the description, a separate exercise section, encouraging students to engage with the chapter has also been snipped. “State one reason why you think the Sedition Act of 1870 was arbitrary? In what ways does the Sedition Act of 1870 contradict the rule of law?” the deleted part asked.

Naxal movement: Class 10 and 12 textbooks that had mentions of the Naxal movement have now been almost entirely dropped. Under chapter ‘Crisis of Democratic Order’ in the Political Science textbook of Class 12, the 1967 peasant uprising was discussed extensively. This, along with the mention of communist leader Charu Majumdar, has been dropped from the textbook now. Gujarat riots: Among other changes, the panel has also dropped every mention of the 2002 Gujarat riots from the Political Science textbook of Class 12. In the chapter titled ‘Politics in India Since Independence’, the riots were described in great detail. Along with the chronology of the incident, the chapter also cited the criticism by the National Human Rights Commission of the handling of the riots.

The chapter originally mentioned: “Instances, like in Gujarat, alert us to the dangers involved in using religious sentiments for political purposes. This poses a threat to democratic politics.” This part, however, now has been deleted. Similar changes have also been made to the Sociology textbook of Class 12 which mentions the 2002 riots.

Emergency: Not just Gujarat riots, chapters discussing the imposition of Emergency under Indira Gandhi’s government have also been dramatically shortened. The deleted part discussed the handling of media, arrests of political activists, and the forced sterilisation of men under the regime. All of which have been dropped now.