The raid was reportedly conducted in response to a complaint lodged by the pro-vice chancellor of MU, Y. Yugindro Singh, claiming that he, along with register (in-charge) K. Shyamkesho, were “kidnapped” by some faculty members and taken to an “unknown room” when they visited a certain wing of the university. 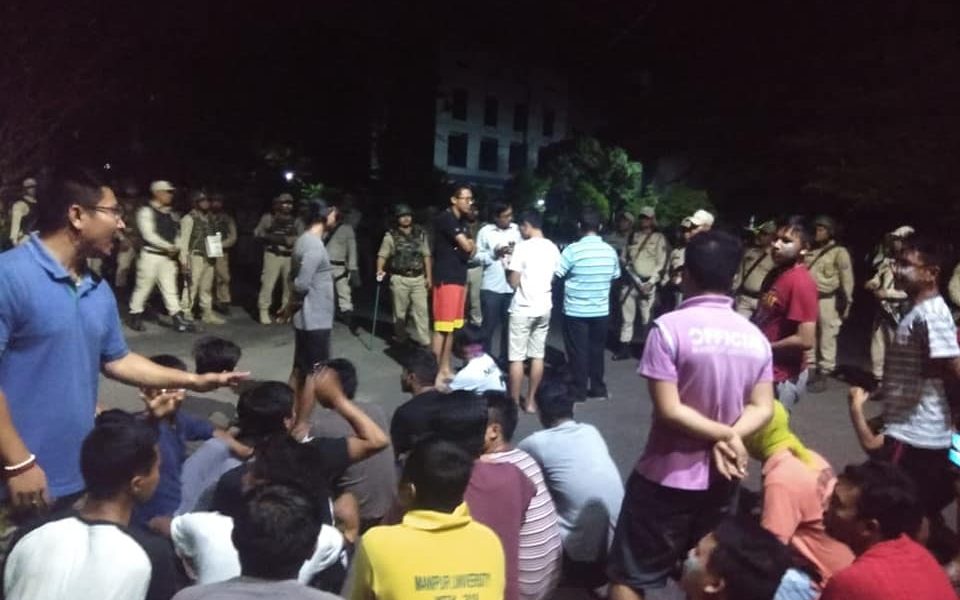 New Delhi: All the six Manipur University (MU) faculty members and seven out of the 89 students arrested by the state police during a raid conducted in the hostel and premises of the teachers within the campus in Imphal, have been remanded to judicial custody. The raid, which began on the midnight of September 20, went on till the afternoon of September 21.

Two of the students, Laishram Kennedy, the general secretary of the Manipur University Students Union (MUSU), and Laishram Robindro, the cultural secretary of MUSU, have, however, been sent to police custody.

All those arrested during the long raid were produced before the chief judicial magistrate of Imphal West later on September 21 following which 82 students were released as per the court orders and the seven students along with the teachers were sent to jail for 15 days. The six arrested teachers were professors, N. Santomba, Chungkham Yashawanta, Sougaijam Dorendrajit, L. Bishwanath Sharma, L. Sanjukumar and Yengkhom Raghumani. The seven students sent to jail were L. Renold, Kh. Joychand, M. Santosh, P. Romarjit, Kh. Sushilkumar, L. Peter and Ngamkholen Mate.

As per local news reports quoting police sources, the raid was conducted in response to a complaint lodged by the pro-vice chancellor of the MU, Y. Yugindro Singh, claiming that he, along with register (in-charge) K. Shyamkesho, were “kidnapped” by some faculty members and taken to an “unknown room” when they visited a certain wing of the university. They further complained that they were kept in their custody for three hours and released only after they gave in writing that they wouldn’t enter the varsity complex. The complaint also mentioned an attempt to kill them by using sticks and stones.

However, according to the students and faculty members present during the raid, the police action had left many students injured besides creating an atmosphere of fear within the campus.

Later on September 21, the pro-VC issued a statement saying all the six faculty members have been suspended following their arrest.

The strike was suspended  by the MUSU on August 18 after an agreement was signed with the state government and the Ministry of Human Resources and Development (MHRD), which controls the central university, that Pandey would go on leave and not enter the university premises till a commission of enquiry conducts an investigation into the allegations. Though the university reopened and preparation began for the stalled semester examinations, the issue didn’t die down completely as the students and the faculty members alleged that attempts were being made to tamper the evidence to protect Pandey, a former faculty member of Banaras Hindu University. Also, Pandey, besides returning to resume his duties on September 1, also filed a petition in the Manipur high court against the August 18 agreement. This led the MUSU to state that they would resume the strike.

However, prior to his arrest, L. Kennedy told Imphal Free Press (IFP) in an interview that both the pro-VC and the register (in charge) entered the campus even though there was a ban on their entry. He claimed it was done as they feared that the duo would tamper with the official papers to cover up the allegations against Pandey. “As we do not want to humiliate them, we talked in a closed room as suggested by Professor K. Yugindro himself, but they misinformed that they have been confined in a room for 2-3 hours,” he added. Kennedy said, “After an agreement has been reached we asked Professor Yugindro to sign the statement mentioning the agreed points. If he has the ethics of a teacher, he would have acted accordingly.” He said the raid was conducted at a time when the students were preparing for the ongoing semester examinations.

Meanwhile, the state administration has clamped a ban on Internet for five days. The ban on the Internet and the raid which had led to injury of a lot of students have attracted public criticism of the N. Biren Singh-led BJP government.