Magistrates Will Now Watch Over Kashmir Schools, While Police Wait Outside

Though schools and colleges have reopened, students are yet to return to classrooms. 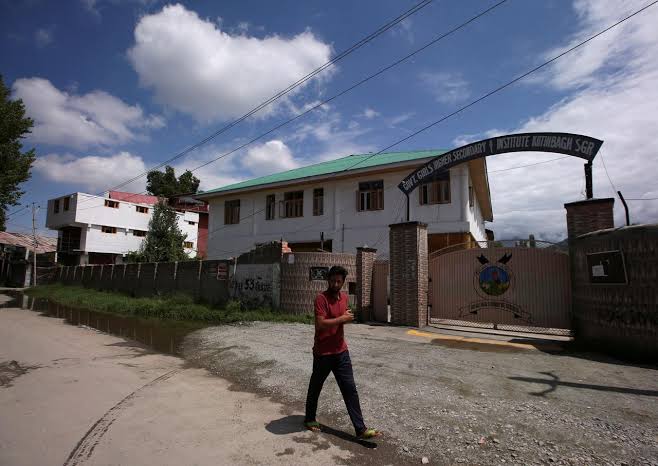 A man walks past a school in Srinagar, August 19, 2019. Photo: Reuters/Danish Ismail

Srinagar: The Jammu and Kashmir governor’s administration has decided to keep an eye on students in the Valley and depute magistrates to every educational institution to oversee their day-to-day functioning.

This decision was taken at a high-level meeting presided over by divisional commissioner Kashmir, Baseer Ahmad Khan last week to ensure the “smooth functioning” of schools and colleges across the Valley, which is witnessing an uneasy calm after the Centre read down Article 370 and bifurcated the state into two union territories.

Though the government ordered the opening of educational institutions last month, most students are yet to attend classes.

The meeting convened on October 3 to discuss the modus operandi for resuming classes in educational institutions was attended by district commissioners and senior officials from the J&K police.

“A magistrate shall be provided to every educational institution for smooth functioning of the schools/colleges/universities,” say the minutes of the meeting, accessed by The Wire.

A source at the state educational department said this is the first time that officials of the magistrate level have been tasked with keeping an eye on campus activities.

Kashmir’s educational institutes frequently erupt in protests over civilian killings or based on separatists’ calls.

In 2017, the government ordered the closure of schools and colleges for several days following massive protests by students when security forces entered the Degree College campus in Pulwama district.

Since August 5, authorities imposed strict restrictions and closed all school and colleges in the Valley, besides imposing a complete communication gag.

Although restrictions were eased and educational institutions reopened after a month, students continue to stay away from classrooms. The government’s efforts to bring students back to schools have so far failed completely.

People fear that the government’s move to reopen schools was politically motivated, and it will use school attendance to argue that there is “normalcy”.

“There is the constant presence of police and the CRPF on roads and lanes in every town and village. Mobile phones were not working and the internet service blocked,” said Mumtaza Akhter. “The political situation is volatile and in this situation, how do you expect a sane parent to send his ward to school? The government can’t sacrifice our children to meet their political ends.”

Unable to bring students to classes, the beleaguered state government last week announced a date sheet for board exams for class 10 and 12 from October 23. It also wants to conduct exams for undergraduate courses in November.

As per the minutes of the meeting, the government has made it incumbent on educational institutions to convene morning assemblies, where authorities will issue an “advisory” to students to concentrate only on studies.

Besides this, police contingents will be active in peripheral areas around campuses.

“The SSPs shall ensure that no police presence is felt within the premises of schools/colleges/universities, however peripheral areas outside the schools/colleges shall be properly dominated,” reads the communication.

To keep a vigil on students inside campuses, the government is thinking about installing high-resolution CCTV cameras.

The government’s decision to hold board examinations has left the students worried in Kashmir. They cite incomplete syllabi to say that exams should be deferred.

“It will be impossible for us to appear in exams as we couldn’t attend the classes for last two months to complete the syllabus,” said Huzaib Nabi, a class 12 student from uptown Chanapora.

“How can the government justify the conduct of exams at this juncture, when more than two months have completely gone to waste? Why not delay the exams or reduce the syllabus,” said Nabi.

So far, the J&K Board of School Education (BOSE), the authority for conducting examinations in the state, is yet to announce any change in the syllabus or the exams, scheduled from October 23, being postponed.

“There will be no relaxation in syllabus and exams will be held on scheduled dates,” said a BOSE official.