Schools in remote areas like Surpur often run without close departmental supervision, making teachers in these schools answerable only to their conscience. 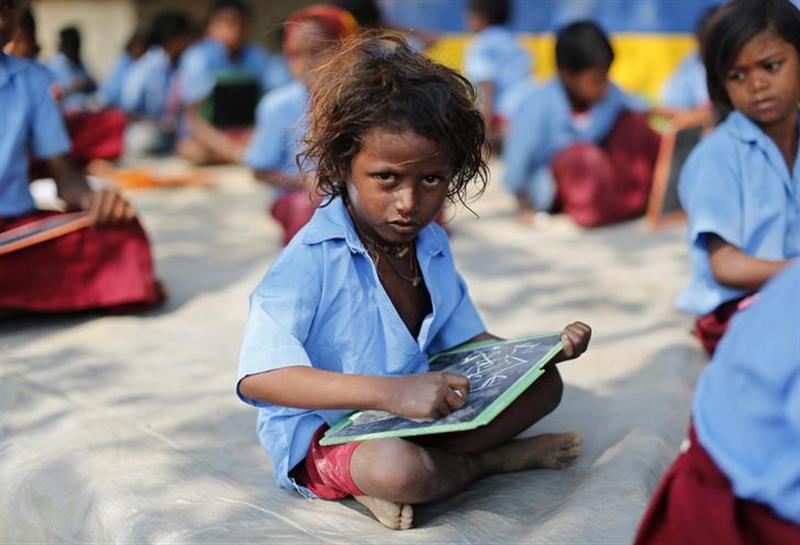 A child whose parents work in a brick kiln attends a class in an open air school at Krishnadevpur village, north of Kolkata, February 11, 2014. Representational image. Credit: Ahmad Masood/Reuters/Files

It is just 10 am one March monring, but the heat is already scorching in the rocky terrain of Surpur in northeast Karnataka. A mile from the highway, through a side road and then a mud path, is Hoovinahalli, a small hamlet of around 800 people. Even as we approach the village, one can see the school abuzz with activity. Spic and span, with a small leafy compound and children are engaged in play in that open area. One immediately sees the judicious use of precious water and it takes only a little more time to note that an empowered children’s cabinet manages many things. Channabasappa Navani, the head teacher, concentrates on ensuring good relations with the community and spends his time and personal resources to see that most of his children are learning well enough to gain admission to the Morarji residential schools and to the prestigious Navodaya School in the district. Life for Navani revolves around the welfare of the children from Hoovinahalli. He is brimming with ideas.

Over seven days, I travelled across Surpur taluk, visiting 16 government schools, observing and talking to around 30 teachers. Surpur is a block I have visited many times over a period of six to seven years from 2002, when we began working there. It is not an easy place to live in and the fact that it is ranked 201 among the 202 taluks of Karnataka on the Human Development Index, makes that obvious. In the last ten years, the roads have improved, the district headquarters, Yadgir, has better amenities and the crops over the last 15 years have changed from hardy jowar to water thirsty paddy. But the strain of making a living is as sharp as before. What seems to be unchanging is the desperate daily wage labourer and his inevitable migration to other places in search of work.

My visits were essentially to the schools and in that regard, things are changing. Some changes are very obvious. Surpur, where average attendance in schools – despite the midday meal and the exhortation of teachers – had stubbornly refused to go beyond 65% till 2008, is now around 75% to 80%. And in each of the schools that I visited, I found teachers and the head teacher present, engaged with their children either in the classroom or in the small courtyards that serve most schools as their playground, assembly area and kitchen garden. The ubiquitous cane was nowhere to be seen and one saw children unafraid to tug at their teachers’ arms, saris or shirt.

Ten years ago, I wrote in some sorrow after a field visit to Dehradun and Uttarkashi. At Dehradun I saw a dozen teachers sunning themselves while their 100 odd children sat un-engaged in their classrooms; at Uttarkashi I saw a single teacher grapple with a school of 129 children and I fumed at the injustice of it all. Immediately after, I went to Surpur and saw teachers in some schools desultorily make a drudgery of their work. And I scathingly wrote, quoting from the PROBE I report of 1997 and PROBE II 2006, to say that nothing seems to be changing.

But now in 2017, after my visits to Surpur, I write with hope and admiration. Hope, because I saw teachers and head teachers present, I saw children engaged and involved. In many schools, I saw community members lend a helping hand. There are other significant changes too. A decade back, only four out of ten schools would have uniforms and books reach them in time. Today, that number would have doubled. Ten years ago, around 15-20% of the head teachers would be away visiting the block education office on some errand or the other when you dropped in. But today, they are able to access information from their district headquarters via their younger colleagues who are clearly more internet savvy. Without feeling insecure, the head teacher secede the collation of data to their younger and more competent colleagues, who provide this support with respect for the head teacher’s enormous experience and without disdain for his or her ignorance of information technology.

Rural schools are spread over a large geographical area and even the most conscientious block education officer can visit them just once in two years. In reality, these schools run without close departmental supervision. That is why when one sees teachers in these remote outposts, one can see that they are answerable only to their conscience.

Consider the remote schools in Avoor Dodda Thanda and Jumalpur Dodda Thanda and the turnaround that the head teachers and their colleagues have achieved. Babu Limbani came to Avoor Dodda Thanda when only 45 out of 250 children regularly attended school. Today the average attendance is 190. The teachers, emulating Limbani, are present every morning ahead of time and after school hours voluntarily attend the Teacher Learning Centre to seek ideas to improve their capabilities.

At Jumalpur Dodda Thanda, one is struck by the audaciousness of Achappa Gowder who became the head teacher a few years ago. Realising that migration, an inevitable part of his community, will make regular schooling impossible for the children of his village, he attacked the problem with extraordinary courage by running a hostel within his school premises for the children left behind by parents who had migrated for work. At night, the classrooms become dormitories, and children are provided with breakfast and dinner. He is taking risks, but that does not deter him. His teachers rally around him for if he can go out on a limb like this, the least they can do is to be with him all the way. Achappa scythes through obstacles but more importantly he exudes such energy that better-off members of the village have helped him build more rooms, additional toilets and drinking water facilities.

There is change, there is bravery, compassion and commitment, if one cares to see it. If benighted Surpur can see such change, surely other less disadvantaged taluks and districts across India are also changing? This surmise seems well-placed because, a recent study by my colleagues at the Azim Premji Foundation, conducted across six states with a sample of 619 schools and covering 2,861 teachers, showed that teacher absenteeism (that is, absence without legitimate reason or truancy) is less than 2.5%. The study says that in difficult circumstances that one would often associate with high teacher absenteeism, these teachers and head teachers show remarkable commitment, manifested in no perceivable absenteeism and high levels of engagements in their classrooms.

Whether we accept it or not, for 50% of India’s rural children, the government school is the only option. The midday meal is the only hot meal of the day for them. There remains the tricky problem of ensuring that children learn well in schools.

Meanwhile, our best contribution will be to encourage the teachers in government schools and look at them with fairness and empathy. Their task is a hundred times harder than ours. What one sees though, is that they are trying.