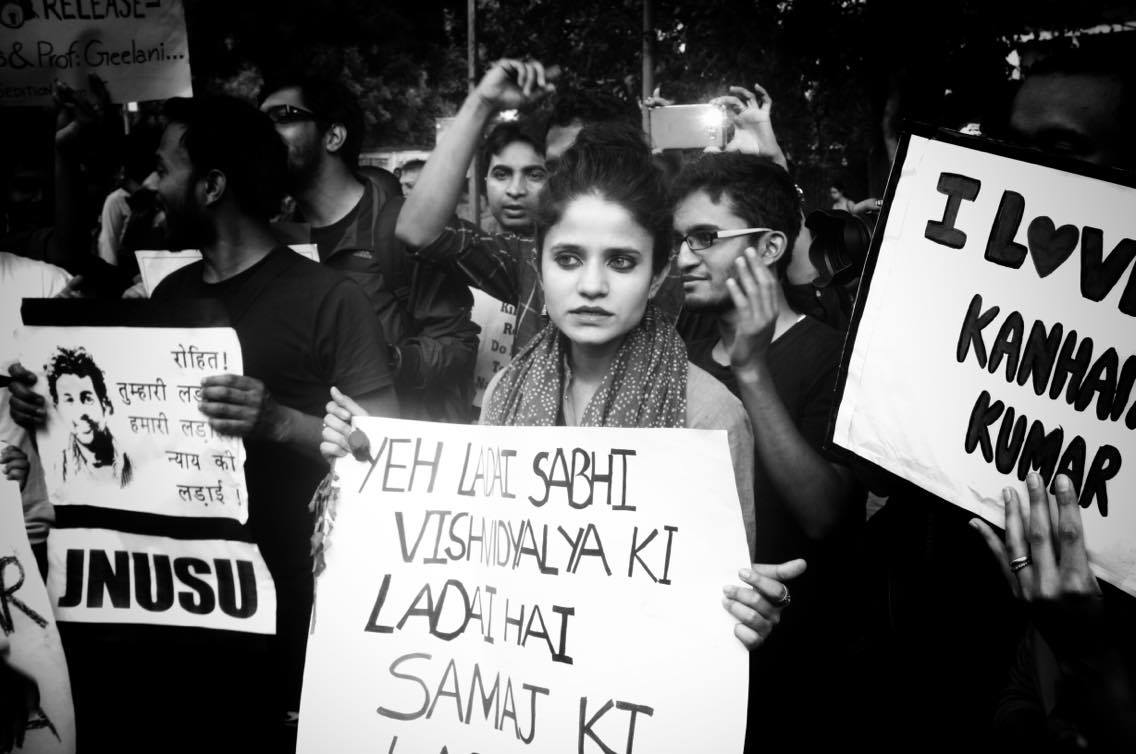 Students protesting the arresting of Kanhaiya Kumar and other JNU students and the suicide of Rohith Vemula. Credit: Shome Basu New Delhi: The Delhi high court on March 2 granted interim bail for six months to JNU Students’ Union president Kanhaiya Kumar. He will be released into the custody of a JNU faculty member on March 3. The bail amount has been set at Rs. 10,000 after taking into account the financial situation of his family.

Kumar was arrested and placed in judicial custody after being charged with sedition for ‘anti-national’ sloganeering on campus on February 9.

Since the magisterial probe report on some of the evidence videos being doctored was not admitted into the bail proceedings, Justice Pratibha Rani appears to have taken the police claims about the authenticity of videos purporting to show students shouting ‘anti-national slogans’ at face value.

While granting bail to Kanhaiya, her order, issued in the evening on Wednesday, makes critical observations about the event held in JNU on February 9 and the students involved. It first begins by quoting a patriotic Bollywood song from the film Upkar to describe what “love for motherland” means:

and then goes on to criticise the event held in JNU and the students who were present:

“The kind of slogans raised may have demoralizing effect on the family of those martyrs who returned home in coffin draped in tricolor. … India is a living example of unity in diversity. Freedom of expression enjoyed by every citizen can be subjected to reasonable restrictions under Article 19(2) of our Constitution. The feelings or the protest reflected in the slogans needs introspection by the student community whose photographs are available on record holding posters carrying photographs of Afzal Guru and Maqbool Butt.

… The reason behind anti-national views in the mind of students who raised slogans on the death anniversary of Afzal Guru, who was convicted for attack on our Parliament, which led to this situation have not only to be found by them but remedial steps are also required to be taken in this regard by those managing the affairs of the JNU so that there is no recurrence of such incident.

… The investigation in this case is at nascent stage. The thoughts reflected in the slogans raised by some of the students of JNU who organized and participated in that programme cannot be claimed to be protected as fundamental right to freedom of speech and expression. I consider this as a kind of infection from which such students are suffering which needs to be controlled/cured before it becomes an epidemic.

Whenever some infection is spread in a limb, effort is made to cure the same by giving antibiotics orally and if that does not work, by following second line of treatment. Sometimes it may require surgical intervention also. However, if the infection results in infecting the limb to the extent that it becomes gangrene, amputation is the only treatment.”

What exactly the judge means by “amputation” in her analogy is unclear. Kanhaiya, however, has apparently not reached the level of “amputation”, according to her order:

“During the period spent by the petitioner in judicial custody, he might have introspected about the events that had taken place. To enable him to remain in the mainstream, at present I am inclined to provide conservative method of treatment.

“The time is ripe that while giving some concession to the petitioner on monetary aspect for purpose of furnishing the bond, he can be required to furnish an undertaking to the effect that he will not participate actively or passively in any activity which may be termed as anti-national. Apart from that, as president of JNU Students Union, he will make all efforts within his power to control anti-national activities in the campus. …”

Two other JNU students also charged with sedition, Anirban Bhattacharya and Umar Khalid, remain in judicial custody. Their bail hearings will no doubt take into account the fact that evidence videos were doctored.