While the university has ordered a phased reopening, the students' union says that hostels should be renovated and vaccination programmers conducted to allow all students to return at the earliest. New Delhi: Members of the Jawaharlal Nehru University Students’ Union (JNUSU) on Monday called for an indefinite sit-in outside the office of the dean of students (DoS), demanding the administration reopen the campus and allot hostels to the 2020 batch of students.

The university had previously issued guidelines that set the stage for classes to be reopened in phases from September 6, starting with PhD students.

In the first phase, the official statement specifies, PhD research scholars who are required to submit their PhD thesis on or before December 31 will be allowed to visit the university.

“Teaching-learning activities will continue online. All schools and centre-level libraries, other than the Dr BR Ambedkar Central Library, will remain closed,” the statement further said.

Students will have to submit a negative COVID-19 RT-PCR test report, not older than 72 hours, and sign a self-declaration form upon arriving at the campus, the university said. 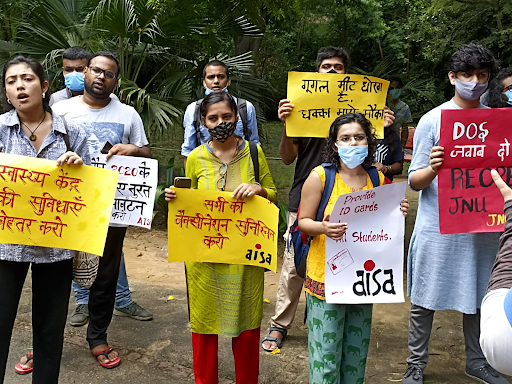 But the student body says that the “hollow” promises were made because of pressure from students.

“If the campus has to reopen in any meaningful way, it has to be for all students, not just those PhD students whose submissions are due,” said Madhurima Kundu, AISA secretary and an MPhil student who is among the protesters.

Kundu, speaking to The Wire, explained, “The 2020 batch have studied here for almost a year and not once have they been asked to come to the campus. They are made to attend online classes, and have not even been allotted hostels yet. How long can academic work and education be done on Google meet?”

Further, she says that because several students from marginalised backgrounds could not afford the technology and internet facilities for online classes, dropout rates have increased in the past year. “A massive number of students have dropped out in all courses. People have dropped out on several accounts, but mostly because they cannot continue to study online due to lack of resources,” she told The Wire.

On Monday, the JNUSU met with the univeristy’s dean of students Sudheer Singh and demanded immediate hostel allotment to students of the 2020 and 2019 batches, issuance of identity card to the first year students, reopening of special OPD’s in health centres, renovation of hostel infrastructure and vaccination drives for all students in the wake of the COVID-19 pandemic.

However, the protesters did not receive any concrete assurances from the dean of students, they told The Wire. 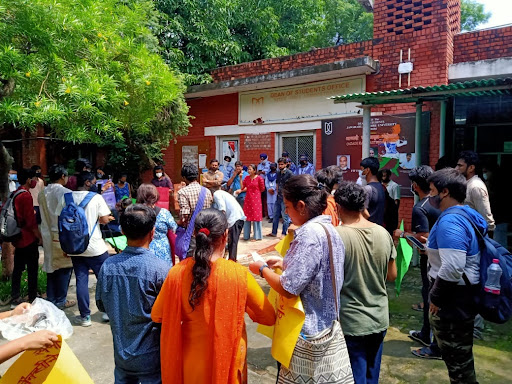 Appealing to the students to participate in the sit-in and urging them to protest, the JNUSU said, “The struggle for the immediate allotment of hostels, meaningful phase wise opening of the campus, universal vaccination and improvement in hostel and health infrastructure should be intensified.”

The same day, JNU VC M. Jagdesh Kumar in a Facebook live said that the university convocation will be held at the end of September.

Dean of students Sudheer Singh said that a committee has been formed to look into the repair work inside the JNU hostels. “Some urgent repairs have already been done,” he said, adding that funds are currently being arranged for bigger repairs.

He added that as soon as the students return to the campus in a phase-wise manner, they will be allotted hostels swiftly, “without any delay”.

But Kundu says that the hostel’s infrastructure is in “really bad shape” and needs urgent renovation, or could cause serious injuries. “The last time it rained, we had a 36 hour power cut in one of the hostels. The rain seeped into the wiring, causing a short circuit. Isn’t that dangerous?” she asks, adding that the ceiling in some hostels is falling down.

Apeskha Priyadarshini, JNUSU convener from the School of Arts and Aesthetics, wrote in a Facebook post, “Chunks of my hostel room ceiling just collapsed on the table with a loud thud. All I can think of is that it could very well be my head. Welcome to the premiere institution of the country, JNU.”

Another student said that the specialised OPD’s in the health centres have been closed since last year. “Only the general wing is open. There are not enough people to cater to the medical needs of such a huge population that resides in the campus. The rich can afford to go to private clinics, but what about the poor?” he asked.

Vikram Agarwal, an MA student in the sociology department of JNU, took admission in 2020 after completing his graduation from Banaras Hindu University (BHU). He says that it is becoming increasingly hard for him to attend online classes.

“I come from the most backward district of Jharkhand, Giridih. We don’t have a proper internet connection here, and in order to attend online class I have to travel outside my locality and find internet connectivity. How long can I do that? This doesn’t feel like getting a real education,” he said.

Agarwal says a classmate of his, Rajesh Yadav, recently dropped out because of similar issues.