The new admission tests – MCQs only available in English – will mean many Hindi-medium students will be denied access to yet another national institution. The Department of Biotechnology at JNU. Credit: Wikimedia Commons 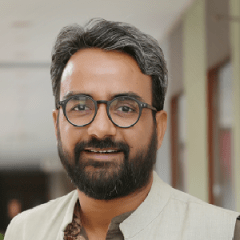 This month, many students across India will be attempting the entrance exam for the prestigious Jawaharlal Nehru University (JNU), New Delhi. Among them will be thousands from small towns and rural parts of India, graduating with degrees in Hindi or other vernacular languages.

JNU was one of the only exceptional universities for Hindi-medium students, for Arts students as well, because it used to allow students to write their answers in Hindi in the admission test, which was based on short essay questions. It is no more the case this year as the new administration, appointed by the Bharatiya Janata Party after 2014, has replaced the earlier admission process with online multiple-choice questions (MCQ) conducted in English.

Getting through the entrance exam for JNU and studying there for a few years is likely to help one with a successful career, whether in the bureaucracy or in academia. As they say, it doesn’t matter much what subject or programme one gets to study – any programme in JNU is good enough.

It is the overall learning experience and rich exposure within the campus that counts. Using a sinister political assault, the BJP and some TV channels have been attempting to break the hegemony of Left politics since February 2016. There is a better way to fight ideas. The image of the university is shattered now, even during the general elections, with all sorts of allegations about ‘anti-national leftists’ and the ‘tukde-tukde gang’ being thrown around.

Some like Mohandas Pai, chairman of Manipal Global Education (which is English-medium and expensive) have a problem with the fact that JNU does not charge much tuition or hostel fee. For many neoliberals, it is too subsidised. Many other ‘defenders’ of ‘Hindu culture’ find that women and men have too much liberty to mingle on campus.

Higher education in India is a privilege not many can access. Most national-level institutes and universities function with English as the only language of instruction, acting as a barrier to success in academia or otherwise. The tyranny of English is such that those who are born and raised outside metro cities, and many within too, are left out. English-medium schools are private or expensive, and many do not even teach substantial reading and writing skills.

Also read: JNU Aspirants, I Feel Sorry For You

Students in provincial towns and rural areas can only get into colleges and universities that function in Hindi. It is not the language of instruction that makes a place good or bad for learning. It is the poor academic environment or lethargy of the teaching staff, as well as a shortage of teachers and the lack of infrastructure.

As a BA student at the Hindi-medium Jai Narayan Vyas University in Jodhpur, I spent three years (2001-2004) without many classes or lectures. Professors would not turn up for class; those who did taught from age-old notes – dictating rather than explaining the complexities of politics and history.

I opted for English literature as an elective course, thinking it will improve my English. Without regular classes, that didn’t work either. Even today, most of the students of English literature take coaching classes to complete the syllabus. Those who cannot afford coaching try to pass with the help of guide books or kunjis. Through the year, there are no mid-term tests, term papers or assignments to worry about.

The library facility in the Arts faculty was basically a pretence – it didn’t even have a door for students to walk in and browse. It had a small window, and there was an attendee behind it who would hand over books, primarily textbooks. There were no newspapers, periodicals or magazines to read. There was no table or chair.

Now, Jodhpur has many small halls and rooms which are called ‘libraries’. They are owned by builders and shopkeepers who charge students every month for using a chair and table to sit and read quietly. I am told there is high demand for such fake libraries, which are just reading halls at best. They opened because students have nowhere to go to enjoy the pleasure of reading in this Hindi-speaking town.

The sad state of Hindi-medium universities does not allow for much learning or exposure. Public universities in Rajasthan are falling apart. Many who succeed from here do so because of self-reliance or family support. They work hard to reach to a national university such as JNU, where they know they can fulfil their dreams.

Also read: In Pursuit of ‘National Priorities’, a University Abandons Its Students

JNU enables the non-elites, as any university should do. However, the new MCQ online admission test is tragic from the point of view of Hindi-medium students. First, it takes away the liberty previously given to write the answers in Hindi. Having the opportunity to write answers in Hindi was a big deal for me when I wanted to study in Delhi. JNU used to be a great leveller with its old admission policy, as it created an inclusive test.

Second, it is absurd to assume that an online test, objective type, is better. For subjects such as political science or history, the test should be analytical, whereas the format of MCQs is all about reproducing crammed information.

Third, there are plenty in provincial towns and villages who are not yet computer or internet savvy. A personal computer or laptop is a luxury that many do not have, and even if they do have smartphones, they may not be used to the speed needed during an online test. Digital India, like ‘India Shining’, is a charade.

JNU’s socio-cultural ecosystem was built a certain way, representative of society. It was a travesty when Gyandev Ahuja, the former BJP MLA from Ramgarh, Alwar, alleged that JNU is hub for drugs where 3,000 condoms and 2,000 liquor bottles are found everyday. This irresponsible statement was not condemned by his political masters.

It is also to be noted that the BJP has claimed the cause of Hindi, with its loud ‘Hindi-Hindu-Nationalism’. One can still hear murmurs about Hindi as the national language of the desired ‘Hindu’ nation. It is a ridiculous desire and personally I associate more with my mother tongue, Marwari, than with Hindi. Yet, the irony is laughable when one can see how BJP cares little about the deprived Hindi-medium students in the frenzy of online tests. Prime Minister Narendra Modi himself takes much pride in communicating in Hindi; yet his government has done nothing for speakers of the language who want access to higher education.