Even as the ABVP applauded the move and hoped that it would serve as "a reminder of the sacrifices that Veer Savarkar endured", the JNU Students' Union called it a "shame on the legacy of JNU". 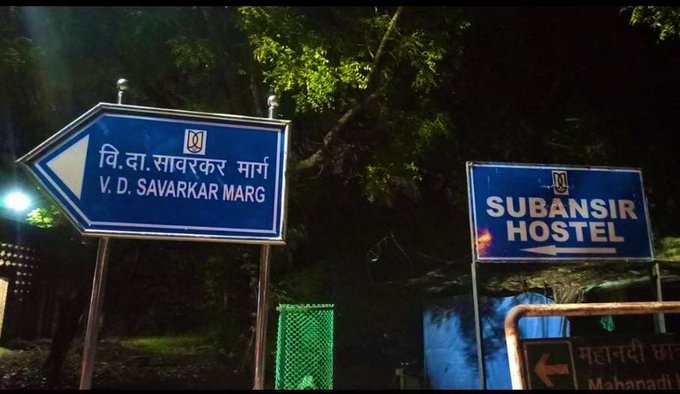 The newly-erected road sign named after Savarkar was seen in the Purvanchal area of the campus. Photo: Twitter

New Delhi: The Jawaharlal Nehru University administration’s decision to name a campus road after Sangh parivar icon Vinayak Damodar Savarkar is likely to turn into yet another tussle between the student’s union and the university vice chancellor.

On Sunday night, a newly-erected road sign named after Savarkar was seen in the Purvanchal area of the campus. The JNU Students’ Union, which is dominated by Left student groups, called the step a “shame on the legacy of JNU”.

It’s a shame to the legacy of JNU that this man’s name has been put in this university.

Savarkar has also been one of the most debated figures in the university between Left and Right-wing groups. The Left and other secular groups have frequently invoked Savarkar’s clemency appeals to the British and his authorship of the idea of India as a ‘Hindu rashtra’, even as groups like the Akhil Bharatiya Vidyarthi Parishad – the students’ wing of the Rashtriya Swayamsevak Sangh – have tried to establish Savarkar as an idol to be emulated and looked up to. As ABVP JNU tweeted today:

ABVP JNU applauds and welcome the decision to rename the way to Subansir Hostel as V.D. Savarkar Marg.

May it be a reminder of the sacrifices that Veer Savarkar endured to release India from shackles of political and cultural slavery.#VDSavarkarMarg#VeerSavarkar#ABVPJNU pic.twitter.com/yNBFptLgVr

While it is unclear when the JNU administration passed the order to name a road in the university after the Hindutva icon, the move will be seen by a large section of the academic community as another part of the attempt to unilaterally impose right-wing symbolism in a campus known to have consistently dissented against the idea of the Hindu Rashtra that Savarkar propagated.

Former JNUSU president N. Sai Balaji said, “At a time when students haven’t received their merit-cum-means, non-NET and other fellowships and the entire world has been enveloped by a medical crisis due to COVID-19, the JNU VC has clearly put forward his priorities i.e. renaming a road after a person who is seen as a betrayer of Indian freedom movement and the people of India.”

Also read: Rethinking Education in the Age of Totalitarian Politics

“Where the focus should have been on preventive measures within campus, and increasing the awareness of students as well as access to health facilities, students, many of them who come from extremely poor backgrounds, are being asked to vacate the university premises (as a preventive measure against the spread of Coronavirus), while the VC is furthering his political agenda,” he added.

He alleged that by naming the road after Savarkar, JNU VC M. Jagadesh Kumar has openly associated with the RSS and has used his “administrative office to further the anti-India political ideas of the RSS”.

Balaji added that JNUSU stands ideologically opposed to the JNU administration’s decision to honour Savarkar. “His multiple mercy pleas to the British aside, Savarkar asked Indians to join the British army. He denigrated the tricolour, supported the two-nation theory, and demanded the anti-women, anti-Dalit Manusmriti to be accepted as Hindu law in independent India,” said Balaji.

Last year, a similar uproar was seen in Delhi University over the installation of Savarkar’s bust outside its Arts faculty. It was eventually removed by the university.