As many as 62% of children in India attended a government primary school in 2014, compared to 72.6% in 2007-08–indicating a surging preference for private schools. 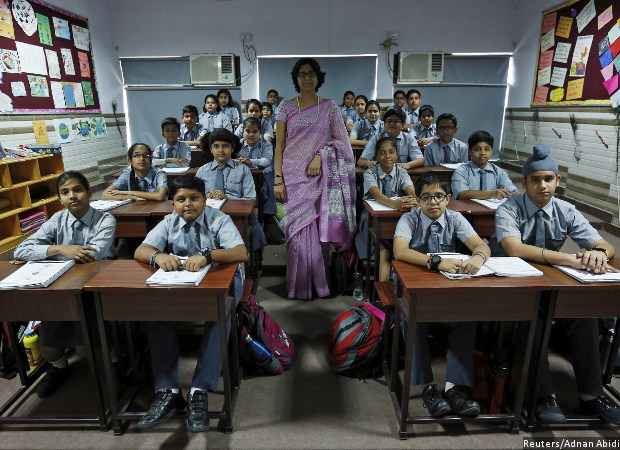 Only 11.6% cited “English as a medium of learning” as a reason for studying in private schools. Credit: Reuters

In a recent Mann Ki Baat address, Prime Minister Narendra Modi stressed that every government should focus on quality learning and outcomes rather than the school enrollment.

Was asked a pertinent question on education. Highlighted why we need to think of learning over only schooling, outcome over only outlays.

As many as 62% of children in India attended a government primary school in 2014, compared to 72.6% in 2007-08 – indicating a surging preference for private schools – according to an IndiaSpend analysis of data in a recent survey on education released by the National Sample Survey Organisation (NSSO). An urban-rural divide is evident: Only 31% of children attended government primary schools in urban areas, against 72.3% in rural in 2014. Yet, this does not mean learning outcomes have improved, IndiaSpend reported last year.

No more than 26% of children in class V can do division, a drop of more than 10% over four years, according to the 2014 Annual Status of Education Report by Pratham, an education NGO.

Despite spending Rs. 586,085 crore ($94 billion) over the last decade on primary education, India has been unable to arrest the decline in learning, IndiaSpend reported. However, when it came to graduation, post-graduation and diploma studies, many enrolled in private institutions because they did not get admission to a government institution.

For instance, 43% of respondents pursuing a diploma cited inability to get admission in a government institution as the reason to enroll in a private institution, while the same number was 27.5% for students pursuing graduation degrees and above.

The trends were uniform in rural and urban areas – although the demand for English-medium instruction in urban areas was higher by 7% at the primary level – pointing to growing educational and career aspirations. 26% of students across India sign up for private coaching

Further, 89% of them cited “augmenting basic education” as the reason for additional tuition. India’s private coaching market was likely to touch $40 billion (Rs 2.6 lakh crore) by the end of 2015, according to a report by Associated Chambers of Commerce in India (ASSOCHAM), a trade watchdog.

(Saha is an independent journalist based in Delhi.)