Several cases of students and faculty members who bore the brunt of funding cuts, privatisation and saffronisation of education are recorded in the report. 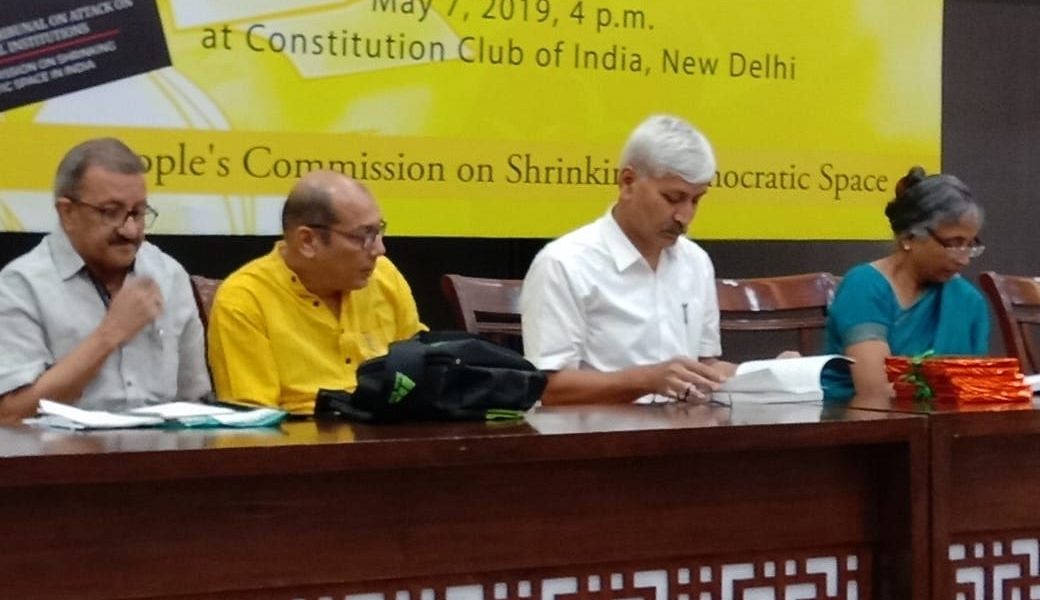 Panel discussion at the launch of the report, 'Indian Campuses Under Siege' in New Delhi. Credit: Special Arrangement

New Delhi: In the last few years, the number of universities in Gujarat has swelled from 15 to over 50. “But these universities have no buildings, professors, vice chancellors, clerks, registrars, etc. Several of them are said to be in primary government schools or in tehsildar’s office.”

Professor Hemant Kumar Shah, of the well-known H.K. Arts College of Ahmedabad, stated this to a fact-finding jury put together by a nation-wide collective of human rights defenders called the People’s Commission on Shrinking Democratic Space in India (PCSDS), to delve into the state of university campuses since 2014.

Professor Hemant also added that the shortage of teachers “was so bad” in his state that he was asked by his head “to teach environmental science to all second semester students in the college together in the hall which has a seating capacity of 735 people, since the college didn’t have enough teachers to take division-wise classes”.

In February, Shah was in the news for resigning from his post as the in-charge principal of the college protesting the trust body’s decision to cancel an event in the institution featuring its alumnus Jignesh Mewani.

Ramakant, a student of the fine arts department of Patna University could identify with Shah’s outlook on the shortage of teachers in government-funded universities and colleges, mainly stemming from an increased cut in funding. Ramakant and fellow students have been demanding the appointment of permanent teachers among other facilities in their university for some time now. He told the jury members comprising PCSDS’ People’s Tribunal on Attacks on Educational Institutions in India that,

“The university doesn’t have any permanent teacher and even the ad-hoc teacher has been removed.” 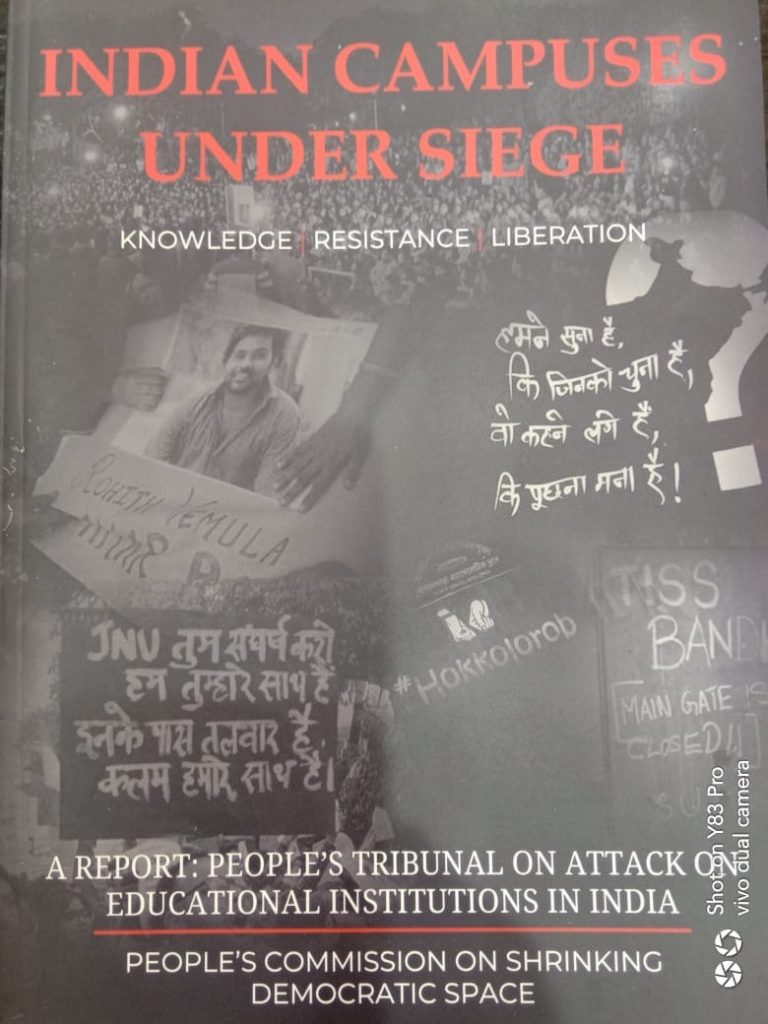 The state of Delhi University is marginally different, he said, because although there are 5000 vacancies, “almost all are filled with or operated by ad-hoc teachers.”

Such testimonials of students and teachers – of as many as 50 institutions and universities from across 17 states – are now a part of a one-of-a-kind report on the condition of various university campuses under the Narendra Modi regime. The report, titled ‘Indian Campuses Under Siege‘, was launched in New Delhi on May 7, 2019.

According to Anil Chaudhary, the convener of PCSDS, a total of 130 testimonies of students and faculty members were received from these states between April 11 and 13, 2018. They spoke to the jury comprising Justices (retired) Hosbet Suresh and B.G. Kolse Patil, professors Uma Chakravarty, Amit Bhaduri, T.K. Oommen, Vasanthi Devi, Ghanasyam Shah, Meher Engineer and Kalpana Kannabiran besides journalist-columnist and The Wire‘s public editor Pamela Philipose.

It points out the drastic cut in funding universities, leading to a shortage of teachers and a steep hike in course fees (in some cases from Rs 5,080 to Rs 50,000, triggering the drop-out of students from mainly to SC, ST and OBC groups). Other key findings include centralisation of the admission process; increased privatisation of institutions through policy changes; distortion of history, syllabus and saffronisation of education; appointing loyalists as university heads; the rise of Hindutva forces within the campuses; suppression and criminalisation of dissenting voices; and use of legal measures to curb students’ protests.

The report records, in detail, many cases of students and faculty members who have had to bear the brunt of it, several of them belonging to marginalised sections of society.

“Testimonies presented by students and faculty before the jury revealed a socially exclusive and unjust system prevailing in the higher education institutions, designed to replicate the marginalisations in society. As revealed from the testimonies, the attacks of privatisation and authoritarianism in the campuses have changed in the social composition of students on campus, directly impacting the marginalised sections of society, in particular, the SC, ST and OBC. Coupled with this, the educational institutions have failed to address the systems of oppression and discrimination faced by students both inside and outside the campus on the basis of caste, language, gender, secularity, religion and region.” 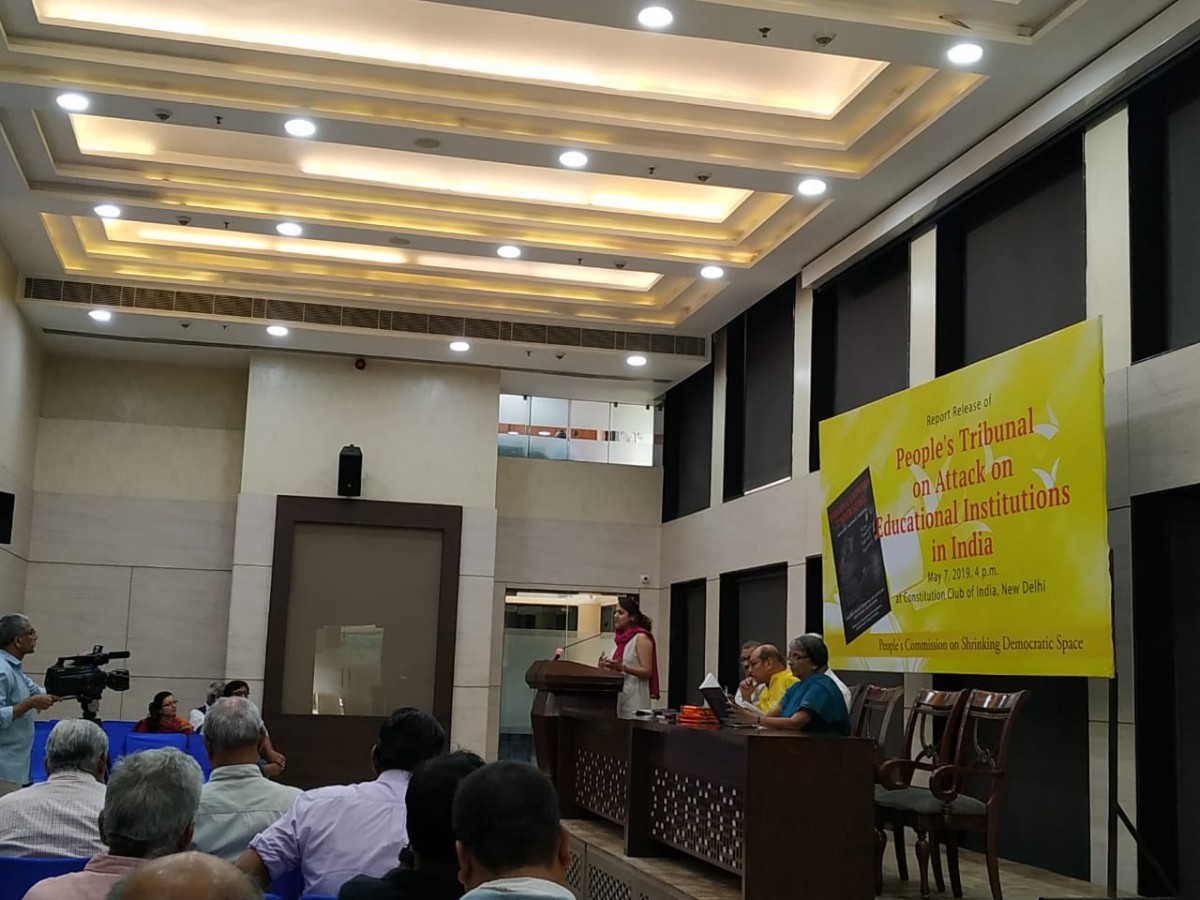 From the launch of the report in New Delhi. Credit: Special Arrangement

Recording his testimony before the jury, Abhay Flavian Xaxa from the Campaign for Dalit Human Rights said ‘intellectual lynching’ of ST, SC and OBC students is occurring during the present regime. This, he said, is done in three ways: “physical discrimination, fiscal discrimination and barriers put up against the policies meant for the educational development of ST, SC and OBC students.”

Offering an instance, Xaxa pointed out that under a new directive on reservation for faculties, “in the Indira Gandhi Tribal National University at Amarkantak in Madhya Pradesh, they advertised 52 positions for professors, assistant professors and associate professors. However, not a single post has been given to ST and SC candidates.”

The jury felt, “there has indeed been a systematic onslaught on the very idea of higher education in India…this is deliberate since an educated gentry can put questions to those who rule and is essential for the furthering and deepening of democracy.”