In Odisha, a School Quietly Empowers Tribal Girls With Its Empathetic Vision

The Mukta Gyan Kutira prefers teaching students through activities such as storytelling, action songs and rhyme-recitation to reorder the process of schooling. Binodini Kumbhar, when called, walks up to the blackboard and begins reading out loud: “Bhalu mu marich khuaila liye, jibha kare halu halu.” The 20-odd girls in the second standard at Mukta Gyan Kutira get busy copying down the poem about a bear who was fed a fiery chilli, and ten-year-old Binodini is proud Jayanthi didi chose her to read to the class.

“The girls love blackboard activities,” says Jayanthi Majhi, one of the language teachers at the school. “So we try to include more of them in our teaching-learning methods (TLM).”

In Kashipur, in Odisha’s Rayagada district, flanked by forested hills and the Haldisil river, the Mukta Gyan Kutira – or Centre for Free Learning – has been quietly yet emphatically revolutionising education for tribal girls since 2004. Its mustard yellow walls are decorated with students’ drawing and short stories, and its library is splattered with colourful books with stories in local languages. 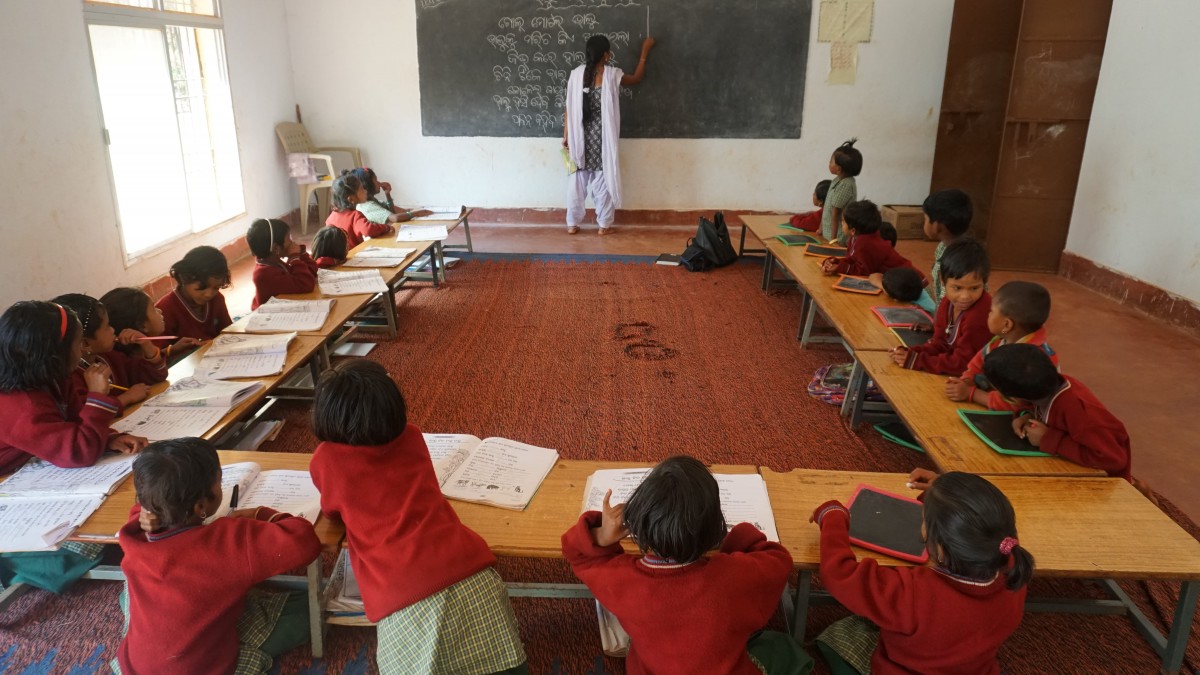 The seating arrangement in classrooms ensures that children have space to perform. Credit: Soumya Mathew

With the longstanding vision of making education accessible for tribal girls in Odisha, the school’s alternative pedagogy is peppered liberally with activities such as storytelling, action songs and rhyme-recitation – aiming to reorder the process of schooling to suit tribal students.

“Abruptly introducing a child to a new concept like, say, the alphabets, interferes with a child’s natural learning process,” said Kanaka Mani Das, 40, the school’s headmistress, whom students call Guruma. “When she is first enrolled in school, she knows at least 3,000 words of her own. We try to teach her how to recognise, read and eventually write these words first, before slowly progressing to newer concepts.”

At first, students’ fine motor skills are developed by making them draw lines and join dots. They then proceed to identify the pictures they have formed by joining the dots, which are things they can identify – a tree, a cow, a monkey or an elephant. As the students’ learning aptitude evolves, the pages turn to show them, say, a tiger; an animal they would have heard of, but probably never seen. A student pretends to be an elephant in class. Credit: Soumya Mathew

The name of the object or animal is written in Odia under each image to enhance the child’s associative learning.  “At this stage, it is important that they associate the word with what it means,” said Ranu Prava Nayak, one of the five teachers at the school. “Learning how to write the words happens eventually.”

As the children become more familiar with the squiggles of the lines being chalked on the board, they slowly take to writing. “There’s no pressure on the child to learn the words and their spellings,” Nayak said. Yet, most of the children pick it up very fast. “If they struggle, the teacher as well as the other students help them catch up,” says the 24-year-old, who has taught at Mukta Gyan Kutira for over a year.

The flashcard method is one of the ways they do so. “We have cut-outs of alphabets that the students arrange on their own to form words. They are then encouraged to tell stories using them,” Jayanti Majhi, the school’s language teacher, explains. Since girls speaking dialects like Kui and Desiya also attend school, teachers like Jayanti ensure that words are first explained in their mother-tongue, and then in Odia.

“This pedagogy relies heavily upon local examples, making it one of the best ways to teach children in tribal areas. However, tribal areas of Odisha, Andhra Pradesh and Chattisgarh mostly have multi-grade classrooms. If there are no feasible-sized classrooms and proper teacher training, it is difficult to actually implement the pedagogy on the ground,” says K. Sujatha, researcher in tribal education and former professor at the National Institute of Educational Planning and Administration (NIEPA).

“The aim is to keep the TLM child-friendly. Our book Kau Dake Ka (Crow says Caw) is designed keeping this in mind,” said Das. 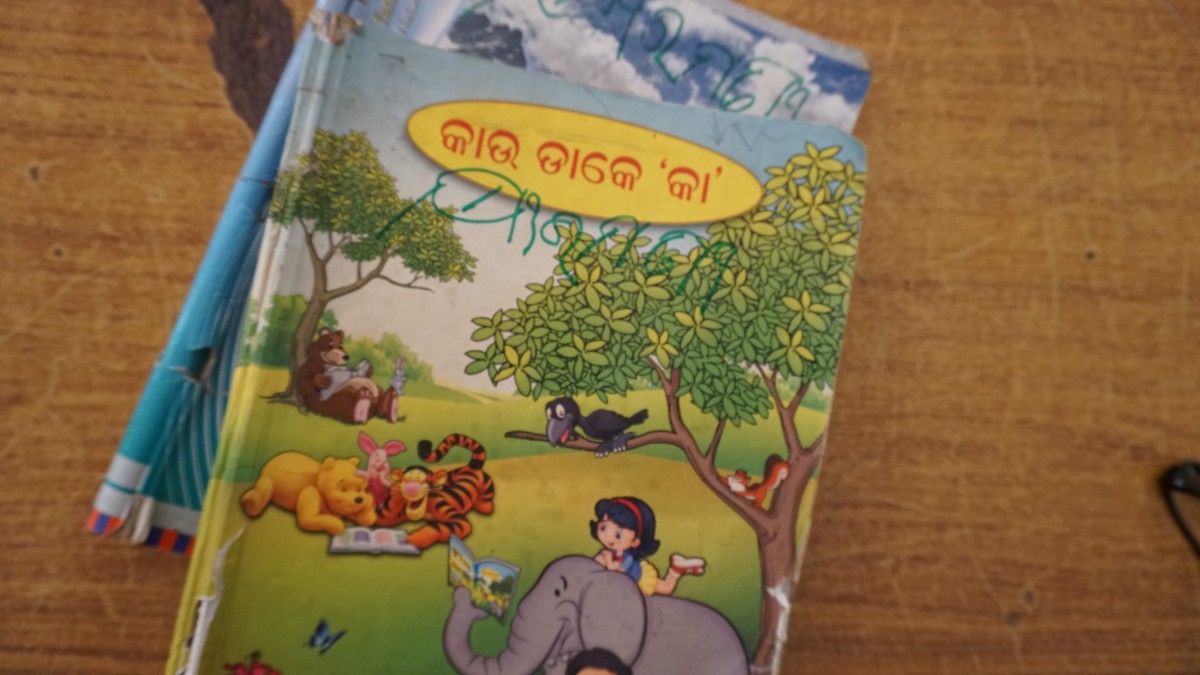 Vidhya Das, the co-founder of Agragamee, the non-profit that Mukta Gyan Kutira is associated with, has attempted to ensure that the 128 girls currently studying there are provided the free learning spaces Sujatha is talking about.

The five grades have been allotted a room each and there is no restriction on the child’s movement, says Vidhya. “She is even free to run out of the class in the middle of a session, though that makes life difficult for these guys,” she laughed, looking at Nayak.

Within each classroom, desks are arranged so that there is a rectangular space formed for the girls to take part in activities.

Even as the institute’s approach makes education accessible to tribal girls, about 121 government primary and upper primary schools were shut in Rayagada in 2016-17 – apparently due to dwindling attendance.

“With barely a teacher or two each, these government schools are not cost-effective,” said Bhupendra Singh Punia, the state project director of the Odisha Primary Education Project Authority (OPEPA). “On the other hand, the hostel schools provide free and quality education. In fact, there is rising demand for hostel schools among the tribals now.”

Both government and private institutions have gravitated towards residential schooling for tribal children in Odisha – an approach that eliminates the challenge of student and teacher absenteeism, as well as logistics and security concerns.

However, the rapidly expanding residential school system also separates children, from a very young age, from their families and tribal communities and heritage. A 2016 paper co-authored by anthropologist Felix Padel asserts claimed that residential schools for tribal children are using “forced assimilation tactics”.

Echoing the concerns raised in the paper, Mukta Gyan Kutira’s founders emphasise that holding onto their indigenous knowledge is important for tribals to live confident adult lives. The school is doing all that it can to that end, says Vidhya.

Also Read: A School By the Forest Is Transforming Tribal Lives in Jharkhand’s Latehar

In addition to regular ‘nature walks’, it recently arranged for the girls to interact with female organic farmers. Challenging gender and caste norms, Kanaka led the school’s Saraswati puja on February 11, instead of a Brahmin priest.

The school’s success is best reflected in how their pedagogy – including their unique textbook – was adopted by 18 government schools in Rayagada, Koraput and Nabrangpur districts over the past two years. For the last five years, the students have produced their own annual magazine, Dangar Katha, or Stories of the Hills.

The girls walk back from the school to their villages – some as far as four kilometres away. But that is not wearing their dreams down. While Taposwini wants to be a teacher “like Jayanthi didi”, Binodini whispers, resolutely, “I will become a heroine.”

As of now, she’s happy to run to Guruma and recite all that she has learnt for the day.