If the Centre's Idea to Better Higher Education is to Dispirit Academicians, it's Working

Why is it that our universities struggle to break into the top rankings of universities? While there are many reasons for this, given the space constraints, let us look at a particularly significant few. 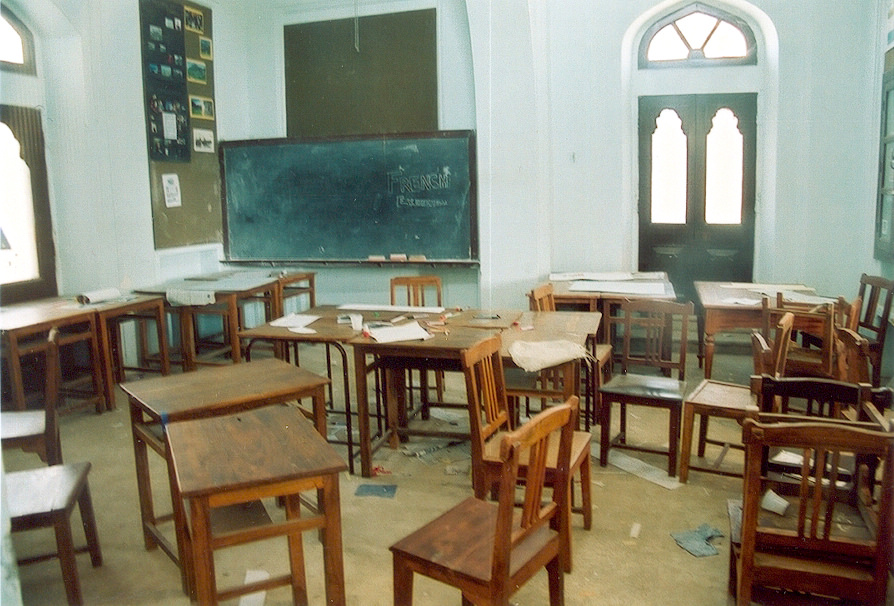 At the Mayo College in Ajmer, Rajasthan. Credit: vinothchandar/Flickr, CC BY 2.0

One excuse often offered for the poor performance of Indian universities is that they cannot be expected to compete with established universities like Oxford and Cambridge, which have a history spanning 800 years. However, a closer look at the facts related to many Asian universities completely debunks this argument. The National University of Singapore (NUS), ranked as the best university in Asia, was founded as late as 1980, much after most of our leading public universities, like DU (in 1922), BHU (in 1916), Madras University (in 1857) and Mumbai University (also in 1857). It was created by the merger of Nanyang University (established in 1955) and the University of Singapore (established in 1962).  Similarly, the Korea Advanced Institute of Science and Technology, founded in 1971, almost at the same time as when JNU was established in India, is ranked sixth in the current rankings. Even more significant is the example of City University of Hong Kong, established only in 1994, and which is ranked seventh in Asia and 57th in the world. Thus, the age of a university does not really matter.

Why is it that our universities struggle to break into the top rankings of universities? While there are many reasons for this, given the space constraints, let us look at a particularly significant few.

Bureaucracy and political interference – Excessive bureaucratisation universities has tremendously slowed down decision-making and created a lethargic work culture in our universities. The work culture in most public universities mirrors that of a typical government department swamped with dreary notifications, office orders and files that keep moving from desk to desk for approval and sanction. As a result, delays – such as in procuring books for the library or renewing access to databases – are routine affairs. Universities often take ages to advertise for vacant positions and then take further ages to shortlist candidates, hold interviews and make final selections.

While the winds of a free market would do a world of good to the Indian economy, leaving public goods like education to the vagaries of market forces is not a good idea.

Delays take place even in making key appointments. For example, more than 20 colleges in DU are running without principals. This includes leading colleges of the country, such as the Shri Ram College of Commerce and the Hindu College, where the position of the principal has been lying vacant for many years now. Similarly, in 2015, it was reported that as many as 16 central universities were headless for more than a year even after VCs demitted office on completion of their term. Compare this with leading universities from around the world, where heads are appointed before the term of the current VC or Dean ends to ensure smooth transition of leadership. Further, it is not just the delay in appointments but also political interference in appointments that continues to be a major cause for concern. Recently, the Ministry of Human Resources rejected the names suggested by the Search Committee for the position of the Chairman of IIM Ahmedabad. Does Cambridge University appoint its VC after the approval of UK’s education minister?

Bureaucracy > academia – We treat our academicians and people aspiring to become academicians with contempt. Consequently, we actively discourage talented people from pursuing an academic career and demoralise existing academicians. Consider: Every 10 years, the government appoints a pay commission to revise the salaries of all government servants. The process is used to fix the salaries of academicians as well, as if determining such a thing is merely a byproduct of fixing the salaries of bureaucrats. This is unscientific because the minimum qualification to become a civil servant is graduation – whereas the minimum qualification to become an academician is at least post-graduation and, often, a PhD. Since the number of graduates far outnumbers the number of PhDs, the skill-set needed to become a generalist bureaucrat is more easily available in the labour market in comparison to the skill-set needed to, say, become an assistant professor of securities and transaction law.

Basic economics tells us that when the supply (of graduates in the labour market) far exceeds the demand, the price (salary) should be lower, and when the supply (of securities and transactions lawyers with excellent doctorates in the labour market) is less than the demand, the price (salary) should be higher. Yet, curiously, the salary of an assistant professor of securities and transactions law in a law school/faculty is determined by first calculating the salary that a Group A central government officer should draw! This sends a loud and clear signal that, in the pecking order of our public system, becoming a bureaucrat is far more illustrious than becoming an academician. It is despicable yet unsurprising that many people pursuing research degrees in our universities spend more time preparing for the UPSC exam than on their research.

Additionally, the entire recruitment process of faculty members shows the derision with which we treat the academic profession. Many a time academicians are hired on ad hoc basis for six months or one year despite the existence of permanent vacancies. These ad hoc appointments should not be confused with people being out on probation to evaluate their performance before offering a tenured or permanent employment. Even if one were to perform superlatively as an ad hoc faculty, it is quite possible that the university may ask the person to leave on the expiry of the term. There are horrifying instances of ad hoc faculty members not being paid salaries during university vacations. DU alone has a colossal 3,500 ad hoc faculty members. Recently, the National Institute of Technology, Calicut, one of the premiere technology institutes in the country, advertised to appoint faculty members with PhDs in different branches such as nanoscience, mechanical engineering, chemical engineering, etc., but on an ad hoc basis for one semester, at Rs 50,000 per month!

Non-academic methods to regulate higher education – The University Grants Commission (UGC), the national regulator for higher education, believes in excessively regulating each aspect of university education – from teaching and research to appointments through mundane ordinances and reams upon reams of notifications. Recently, it came up with an unworkable and nonsensical notification requiring every assistant professor to teach for 18 hours a week. The approach of the UGC to boost research in Indian universities is equally inexplicable.

A few years ago, the UGC devised a points-based system known as the Academic Performance Indicators (API) to lay down the minimum eligibility criteria for the promotion and appointment of associate professors and professors. This system is based on a very complex set of factors that includes publications in research journals. So, an academician can earn 20 points or so by publishing a paper in a peer-reviewed journal, which is also indexed. However, what if an academician is not able to publish in such reputed journals? The UGC does not encourage faculty members to work hard to publish in such reputed journals. Instead, it provides a convenient escape route from this. According to the body, publishing a paper in a non-indexed, non-peer-reviewed journal will fetch an academician 10 or so points provided the journal has an ISSN or ISBN number.

It is very well known in academia that ISSN/ISBN numbers are no signs of academic quality. So an academician, instead of striving to publish in a reputed journal, would find it convenient to publish in all kinds of fake journals just to collect points for appointment as associate professor or professor. No wonder, then, that in the last few years, the Indian academic market has been flooded with all kinds of pretentious journals and books that have no academic credibility whatsoever. All of this institutionalises mediocrity and dissuades those who work hard to push the boundaries of knowledge.

Does Cambridge University appoint its VC after the approval of UK’s education minister?

Incongruously, there is no mention in the API of giving recognition to faculty members for citations of their work. Citations – i.e., when a piece of research is cited in another piece of research – are considered to be the most important factor in assessing the impact of research and is an excellent yardstick to measure quality. QS gives it a weight of 20% in determining its global rankings. Globally, leading universities wish to recruit faculty members whose work is cited more often by others.

No enabling working or regulatory environments – Also, simply quantifying research outputs into points earned cannot incentivise research. It is incumbent on our universities to create the right working conditions for faculty members to undertake and produce meaningful work. This includes having a reasonable teaching load, providing basic facilities such as a respectable office space, access to IT services, research grants, access to quality library services and many more things. Most importantly, research cannot be incentivised if career prospects of academicians depend more on mechanical factors, such as seniority calculated by counting years of service, and less on demonstrable academic expertise.

In all, the current government’s approach toward universities is definitely perplexing. Finance minister Arun Jaitley, in his budget speech earlier this year, mentioned that 10 public and private institutions would be identified to help them become world-class teaching and research institutions by providing them an enabling regulatory environment. The details of this enabling regulatory environment are awaited. Also, why should an enabling environment be provided to only select institutions? Further, the minister talked of creating a Higher Education Financing Agency (HEFA) with a corpus of Rs 1,000 crore to fund ‘top’ institutions. And it was also stated that HEFA would leverage funds from the market.

While the winds of a free market would do a world of good to the Indian economy, leaving public goods like education to the vagaries of market forces is not a good idea. The role of markets in education can at best be an additional source to augment the efforts by the state – but it surely cannot be at the cost of state funding. Also, will HEFA replace the UGC as far as funding ‘top’ (or all) universities is concerned? This seems to be the case because the UGC’s budget has been cut from Rs 9315.45 crore in 2015-16 to Rs 4,286.94 crore in 2016-17, which is around Rs 5,000 crore – much more than the corpus grant of Rs 1000 crore rupees for the proposed HEFA.

If India is serious about its aspirations to emerge as a global knowledge economy and to emerge as a major power in Asia and the world, it cannot any further afford to neglect its higher education and universities.

Prabhash Ranjan is an assistant professor at South Asian university. The views expressed here are his own.