The ruling is the first of its kind against one of the largest publishers of so-called 'predatory' journals. New Delhi: A US federal court has ordered Hyderabad-based OMICS International – which claims to publish over 700 peer-reviewed journals – to pay a fine of over $50 million to the Federal Trade Commission (FTC) for engaging “in unfair and deceptive practices”. The case was heard in Nevada because OMICS is legally incorporated there.

According to the March 29 court order, the US-based body arrived at the amount by calculating OMICS Group’s gross revenue during the period August 25, 2011-July 31, 2017 and deducting the $609,289.13 paid as refunds made by the company. The fine is apart from the permanent injunctions against most of the organisation’s activities that are highly objectionable, R. Prasad wrote in The Hindu.

The ruling it first of its kind against one of the largest publishers of so-called predatory journals, Jeffrey Brainard noted in Science magazine. ‘Predatory’ journals are the ones that will publish anything in exchange for an often substantial fee.

Apart from publishing journals, OMICS has claimed on its website that it organises over 3,000 conferences globally on topics ranging from medicine, pharma and engineering to science, technology and business.

The order by Gloria M. Navarro, Chief Judge of the US District of Nevada, noted that “Defendants did not participate in an isolated, discrete incident of deceptive publishing, but rather sustained and continuous conduct over the course of years”, and has come after the court had in November 2017 granted a preliminary injunction temporarily halting OMICS’s deceptive business practices.

The Wire previously reported that the OMICS Group – a notorious name in scientific publishing – was sued by the FTC in September 2016 for “bilking researchers out of potentially millions of dollars”. It had alleged that the group had made misleading claims about manuscripts being peer-reviewed and had without consent used named of prominent researchers as editors of journals.

FTC had further alleged the OMICS had not been transparent about the publication fees charged per manuscript until after it had accepted an article for publication. The group was also alleged to often deny researchers from withdrawing articles after submission.

“The defendants in this case used false promises to convince researchers to submit articles presenting work that may have taken months or years to complete, and then held that work hostage over undisclosed publication fees ranging into the thousands of dollars,” said Jessica Rich, the director of the FTC’s Bureau of Consumer Protection. “It is vital that we stop scammers who seek to take advantage of the changing landscape of academic publishing.”

The group was also in the news for collaborating with Adityanath’s Uttar Pradesh government to form a 1,000-seat facility at Noida to translate its papers into Indian languages. The move was criticised as an attempt to gain legitimacy for fraudulent practice. The OMICS Group, The Hindu reported, was included in Jeffrey Beall’s list of “potential, possible, or probable” predatory publishers. Beall is a librarian at the University of Colorado, Denver, and a prominent voice in the scientific publishing community.

Predatory journals, as Thomas Manuel explained in The Wire earlier, are unintended beneficiaries of the open access revolution. They appear to be genuine scholarly publications, “but behind the façade of respectability, there tends to be a litany of false claims and a bill for the joy of seeing your paper published.”

Calling the summary judgment without calling for a trial “unjustifiable,” Kishore Vattikoti, the lawyer for OMICS said in an email to The Hindu that the company plans to appeal.

He said: “The founders of the defendant companies were not permanent residents in the United States nor there had been any physical presence or operations commenced from United States,” adding that “My client had already [sought] $3.1 billion damages from FTC during [its] motion for Summary Judgement. FTC might have expected that if the trail was scheduled and happened in my client’s presence, the defendant would have [sought] for $3.1 billion damages because of FTC’s alleged unfair activity. This might be the reason [the] final order has been announced without a trail.”

The Hindu, however, pointed out that contrary to these claims, OMICS has listed a Nevada address on its website and provided US contact numbers as well. 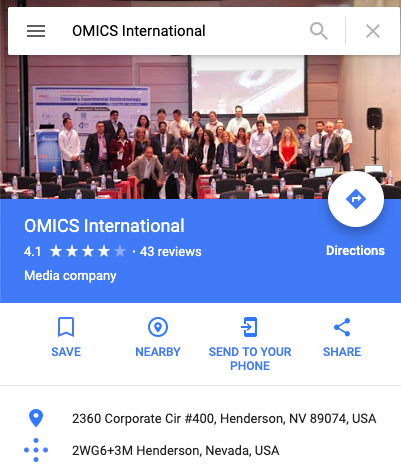 Contrary to the lawyer’s claim that the summary judgment had been given without calling for a trail, The Hindu further noted that March 29 order clears states otherwise.

While OMICS claims to have over 50,000 leading experts as editors for their journals, FTC has pointed out that several of them had never agreed to be affiliated with the group.

“I am neither on the rolls of OMICS nor am I the editor of any of those journals. I didn’t even know that they were using my name on their website. In fact, my affiliation on the site is not accurate. It was possibly lifted from the cover of one of my earlier books,” Rajesh Malhotra of AIIMS-Delhi told Indian Express last July.

As per the court order, FTC had also given evidence of OMICS indulging in “sham” peer reviewing.” For example, in certain instances, consumers who submitted articles were approved for publication within just several days of submission. In others, consumers reported receiving no comments or proposed revisions from peer reviewers. The consumers who did receive feedback from reviewers have noted that it was not substantive.”

FTC’s expert had thus concluded that the papers had not been subjected to peer-review “as that term is understood in the academic publishing industry.”