The National Achievement Survey, conducted in November last year, found that the national average of scores in all subjects evaluated fell from the last iteration of the survey in 2017, and that learning outcomes get progressively worse in higher grades. 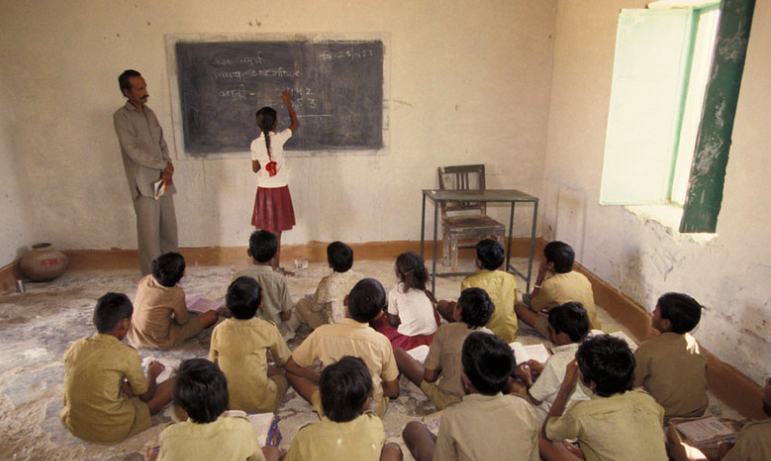 New Delhi: The performances of students in schools from across the country have suffered in the five years since 2017, a survey by the Ministry of Education has found.

The National Achievement Survey (NAS) was conducted by the Ministry in November last year and covered 34 lakh students from 1.18 lakh schools in 720 districts across states and Union Territories (UTs) in the country.

The survey tested students from classes 3, 5, 8 and 10 and covered a variety of subjects, from math to environmental and social science, with the specific concepts tested being tweaked for students from each grade.

Importantly, a dip in educational outcomes was observed across grades and subjects with national average scores dropping by nine percentage points since the last time the survey was conducted, in 2017. Moreover, all but two states – Punjab and Haryana – saw poorer outcomes than in the last survey, the Indian Express reported.

“The objective of NAS 2021 is to evaluate children’s progress and learning competencies as an indicator of the efficiency of the education system, so as to take appropriate steps for remedial actions at different levels,” the newspaper quoted an official Ministry statement as saying.

COVID and the digital divide

A major driver of disruption in the education sector was the onset of the coronavirus pandemic in early 2020. Not only were learning outcomes in general disturbed by lockdowns and school closures, but the migration to the online mode of learning deepened the existing digital divide among students from different socio-economic backgrounds.

The NAS, 2021 found that 24% of students surveyed did not have access to digital devices in their homes and 38% claimed that they had difficulty carrying out learning activities at home during the pandemic.

Also read: What Happens to the Right to Education, Online?

Importantly, a whopping 80% of students said that they learnt better at school, where they could solicit the help of their peers.

Class 3 students were tested on Math, language skills and their conceptual understanding of environmental science.

Moreover, the Indian Express report notes that the sum total of scores for all states, expressed as a percentage, was lower than the national average from the 2017 survey – with the exception of Punjab and Rajasthan.

Along with Punjab and Rajasthan, Kerala emerged as one of the best performers while the worst performers were Telangana, Andhra Pradesh and Chhattisgarh.

Class 5 students were tested on the same subjects as their class 3 counterparts and the results were broadly similar as well.

Average scores in math fell from 53% in 2017 to 44% in 2021 while language scores went from 55% to 58% and environmental science scores fell from 57% to 48%. Once again, Rajasthan and Punjab bested the national average from 2017 and states such as Kashmir, Madhya Pradesh and West Bengal, while remaining below that average, were among the best performers this year.

Telangana, Chhattisgarh and Meghalaya were the worst performers in terms of class 5 students.

Class 8 students were also tested on Math and language skills, as well as on science and social studies.

The national average for Math fell from 42% to 36% while it went from 57% to 53% in languages and from 44% to 39% in both science and social studies. While Meghalaya, Tamil Nadu, Telangana and Uttar Pradesh were among the worst performers, getting scores well below the national average of 2017, Punjab and Rajasthan, once again, bucked the trend.

The 2021 survey for class 10 students is an outlier in terms of comparisons since this grade was not tested in the 2017 survey. Yet, the trend of scores in common subjects falling for higher grades continues.

Students were tested on Math, science, social studies, English and modern Indian languages and the national average scores stood at 32%, 35%, 37%, 43% and 41% respectively.