Most well-funded social sector organisations don't have any employees from the communities they are seeking to uplift. 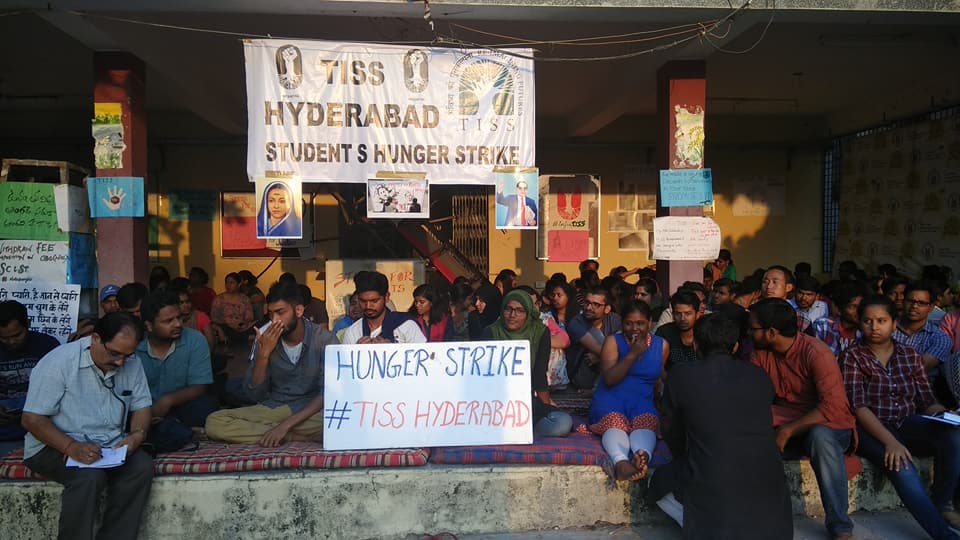 Students protesting at TISS Hyderabad. Credit: Facebook/TISS for everyone

A common thread across the spectrum of India’s social sector (read: development work-related organisations/NGOs/philanthropic foundations) and the development professionals I have interacted with is a passion for social equality, a sense of purpose and academic and professional skills required to advocate, innovate and contribute to improving lives of the marginalised in our society.

But another common thread is the glaring absence of voices from those very marginalised communities and historically underprivileged groups at funders’ summits, civil society forums, corporate social responsibility conclaves, foundation boardrooms and think-tank strategy sessions. Rarely have I come across individuals who might not only have the passion, purpose and preparation but also the lived experiences to meaningfully contribute towards decisions intended to improve health, nutrition, education or livelihood outcomes in their own communities. Individuals for whom improving quality of life of the vulnerable is not only a professional passion but also a personal one.

Though the powerpoint presentations, annual reports and conference talking points repeatedly use the terms ‘marginalised’, ‘underprivileged’ and ‘backward’, most within the social sector and anyone who looks into the numbers will immediately identify the specific people these terms are referring to. It is particularly disappointing that though the sector is interacting with Dalit, Bahujan and Adivasi communities all the time, professionals from those communities don’t find adequate representation in the sector and its decision making. Not only is there a lack of representation among social sector professionals, there is also no conversation around this issue. Any attempts to fix it will have to start by examining how the pipeline for candidates entering the sector inadvertently excludes individuals from social groups who form the majority of its constituents.

In this context, one cannot ignore the ongoing student protests at all four of Tata Institute of Social Sciences (TISS) campuses. TISS is the oldest institute in India for interdisciplinary postgraduate studies in development studies. It is a well-recognised name in the development sector, with a rich history of producing domain experts. The ongoing protests come in the wake of a fee hike at TISS, along with the withdrawal of the fee waiver for the Government of India-Post Matric Scholarship (GoI-PMS) awardees, a scholarship offered to SC, ST and non-creamy-layer OBC students from families with an annual household income under Rs 2.5 lakh.

It is undeniable that scholarships like the GoI-PMS create opportunities for Dalit, Bahujan and Adivasi students to enter a world-class institute like TISS. The average first-year tuition fees and deposits for an MA programme at TISS are approximately Rs 35,000. Hostel and dining fees at TISS are an additional Rs 30,000. Withdrawing the scholarship for SC, ST and OBC students would mean that qualified individuals from these communities, after all their struggles to get admission into TISS, will now need to cough up ~25% (even more in many cases) of their family’s income (Rs 2.5 lakh or less) for a whole year, to secure their admission. With such systemic exclusionary policies abound at various stages of academic and professional training, is it any surprise that India’s social sector looks the way it does?

When we talk about the exclusionary policies being forced on some communities, in good conscience we cannot overlook the deep-rooted structures that have carefully defined “merit” and acted as gatekeepers to coveted positions and cutting-edge research in India’s social sector. It doesn’t take too long to realise that India’s social sector is relatively small and seemingly closed off. The young professionals you meet in the social sector, more often than not, are alumni of postgraduate development studies programmes from the same dozen foreign universities, have done one of the half-dozen India-focused development sector fellowships and/or have overlapped in the Bihar/Jharkhand/Chhattisgarh “dev scene”.

In contrast to the already unaffordable tuition fees at premier Indian institutes like TISS, one-year tuition fees to pursue postgraduate (MA/MSc/MPhil/PhD) interdisciplinary development studies programmes at coveted universities in the UK will setback overseas students by ~20,000 pounds. And across the pond in the US, MEd., MSW, MPP, MPA, MPH and the likes from top universities are offered at a tuition fee of over ~$40,000 per annum.

So, on one end of the aspirant pool, we have students who are reconsidering their admission to a development studies programme because of the fee increases coupled with the withdrawal of funding to their scholarships, and on the other end we have students entering the social sector from top-notch programmes which are out of reach for most Indians. According to an RTI, the enrolment of OBC students at TISS has fallen from 27% in 2013 to 18% in 2016, after the financial aid designated for OBC students was withdrawn in 2015. A similar fall in enrolment numbers is expected from social groups who will be affected by the current round of fee hikes and scholarship funding cuts.

When I asked a friend why we barely met other DBA professionals in the social sector, their response was that I needed to look in the right places. I looked hard, only to keep running into a Sen-Subramanian-Singh and their peers. For that matter, I ran into more white people doing research work in places where they could barely speak the local language than the number of DBA social sector professionals.

The social/development sector is not a monolith. Apart from intergovernmental organisations, international and local NGOs, funding agencies, think-tanks, the international development consulting firms at the top of the pecking order, there are grassroots organisations doing much-needed work in nondescript places. And then there is a range of organisations in between doing impactful work. So saying that only privileged graduates from foreign universities are being hired by the entire social sector will be an overt generalisation, but at the same time ignoring the lack of representation at every level of the social sector will be wilful blindness. Having interacted with many wonderful individuals with exemplary academic qualifications, who are making tangible contributions to the sector, I will not for a second doubt those individuals’ passion for the work they are carrying out. However, I am cognisant that their passion is actualised from a place of privilege.

Coming back to the current issue at TISS, there are various reasons for it, ranging from repeated delays in transfer of scholarship funds from the Ministry of Human Resource Development to inadequate contributions from respective state governments towards the GoI-PMS, to the question of TISS’s status as a deemed university. Irrespective of the reasons for the current issue, the social sector should be worried about the long-term effects that withdrawing scholarships to SC, ST and OBC students will have on the composition of the sector’s future professionals. This is a moment for sector leaders and public intellectuals to stand in solidarity with the students fighting the #inJusTISS being faced by SC and ST, OBC students at TISS and other academic spaces.

This is also a moment for the social sector and all the good-conscious professionals contributing to this sector to rethink diversity and representation in their hiring, decision making and thought leadership. Though the lack of representation is not unique to the social sector, when the upliftment of marginalised communities is your stated motto, then your inaction to achieve representation in your offices is not acceptable. India’s development sector should start practicing what it preaches.

Benson Neethipudi is a project manager with experience in management consulting, product development and India’s social sector. He is a Dalit, and a keen observer of the intersection of caste, privilege and their interplay in everyday experiences.