COVID-19: A Summer of Struggle and Innovation for Educators

Across the country, teachers, parents and governments are coming together to try and ensure that learning continues. 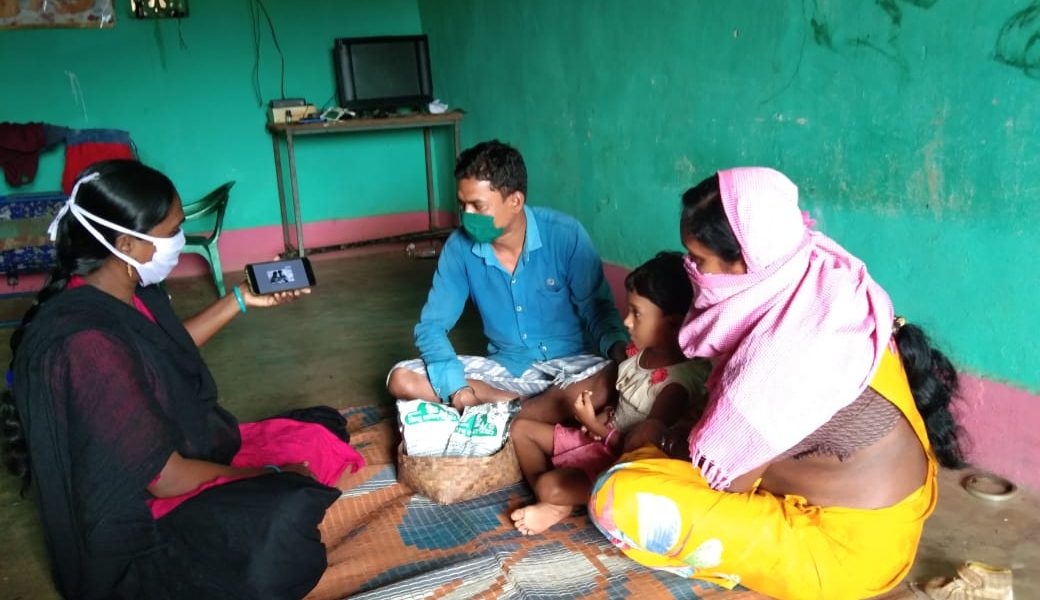 Chennai: On June 25, news reports about Shyam Kishore Singh, a school teacher from Jharkhand’s Dumka district who had put up several loudspeakers across Bankathi village to teach his students who don’t have smartphones, every day for two hours, since April 16. Around the same time, six government school teachers in Bakshi-ka-Talab, situated on the outskirts of Lucknow, came together to create a WhatsApp group to engage rural children.

An otherwise relaxed vacation has turned into a challenge for educators. On May 28, UNESCO reported that around 2.7 million teachers from India who had been impacted by the pandemic are untrained to handle the changed situation. Educators have been preparing digital lesson plans on overdrive and many students are grappling without access to technology, even as many teachers are unpaid or have lost their jobs. Anganwadi workers have home-delivered educational material and tried to involve parents in the learning process.

Inspite of all the challenges, tutors and learners have ensured that learning continues.

The lockdown has seen many fathers upping their game by indulging in in joint activities with their children and recording them. Enabling these ‘men’streaming initiatives are the foot soldiers – anganwadi workers across states. 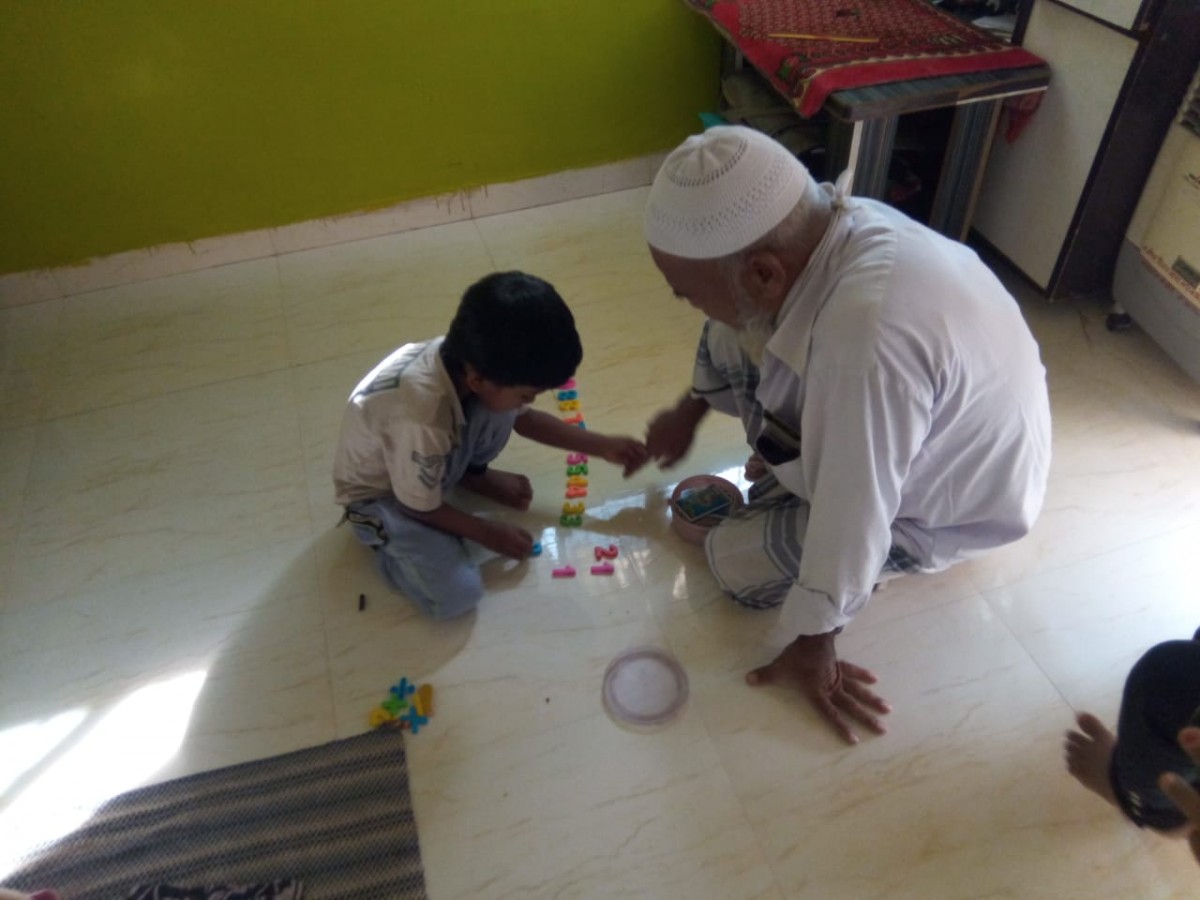 The main focus has been on ‘men’streaming initiatives by involving the menfolk in childcare responsibilities and encouraging joint child-parent activities. Photo: Special arrangement

With 72,857 anganwadi centres shut and around 16 lakh children locked at home in Odisha, the Department of Women and Child Development in collaboration with UNICEF launched the ‘Ghare Ghare Arunima’ initiative in April. It’s a calendar-based list of activities for children. The subjects chosen were handpicked and timely – washing hands, hygiene, sanitation and social distancing.

“The anganwadi workers focused on the menfolk in each house. We wanted to ingrain equal childcare responsibility, which holds the key to psychosocial well-being of children and strengthens the family bond in times of a pandemic,” said Anu Garg, principal secretary, Department of Women and Child Development, Odisha.

“In my 30 years of service, I have never seen fathers so involved in child-led activities, especially in the largely tribal communities of Yavatmal district,” said Sandhya Nagarkar, deputy commissioner of the Integrated Child Development Services (ICDS) Scheme in Maharashtra. Daily activities under the ‘Aakar’ initiative are being disseminated to WhatsApp groups of parents. Anganwadi workers explain the details in person to those who lack digital access. 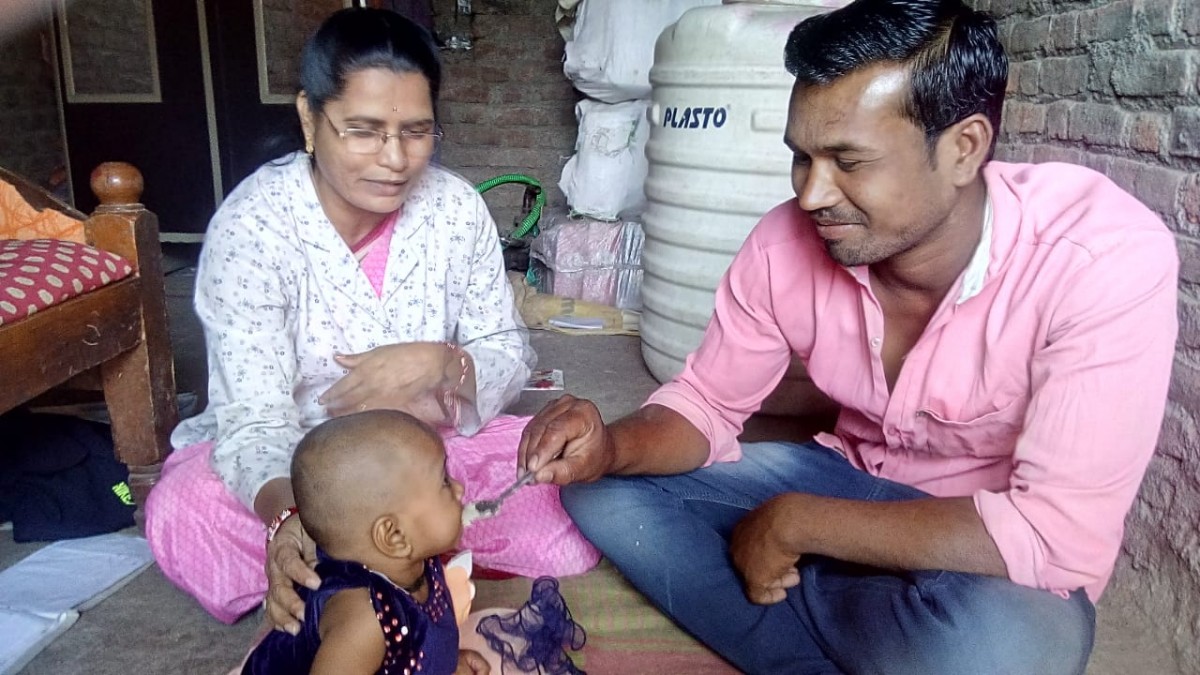 In Maharashtra, daily activities under the ‘Aakar’ initiative are sent to a WhatsApp group of parents. Photo: Special arrangement

In Chhattisgarh, the ‘Sajag’ initiative is focused on positive and responsive parenting. Every Monday, a short and effective audio message on specific tasks reaches the parents’ inboxes or is delivered through anganwadi workers, like ‘share your childhood memories with your ward’ and so on. ‘Chakmak’, the other programme, involves parents in simple and interesting activities with children like making boats. Shruti Nerkar, commissioner, Department of Women and Child Development, said that the joint family activities have led to responsible parenting and a reduction in aggression.

Shantha Sinha, former chairperson, National Commission for Protection of Child Rights, said that while children want to be reassured about their schooling opportunities, there is a lot of innovation happening on the ground. School teachers and NGOs are tracking and resolving children’s issues in the tribal areas of Odisha, Bihar and Telangana. 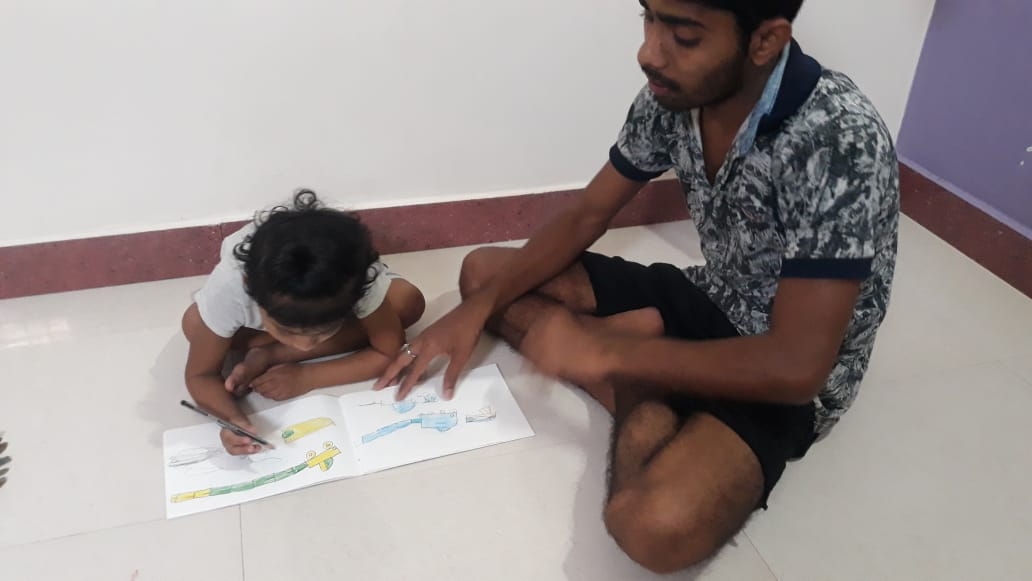 The ‘Chakmak’ initiative in Chhattisgarh has helped involve parents in simple and interesting activities with children during the lockdown. Photo: Special arrangement

The last few months had seen over 1.5 lakh teachers being trained over 5,000 sessions, braving infamous internet connections and power outages, to become more digitally literate. “Teachers have evolved from the chalk-blackboard-book teaching to a digital overhaul. They have managed this feat in these anxious times, along with taking care of their own families,” said Dr Biswajit Saha, director, skill and training, CBSE.

While the debate on whether online classes are viable or not continues, the efforts to sync them to the current needs has been ongoing. “Teachers are getting prepared in a systematic way for a post-pandemic scenario, with daily training sessions. For teachers living in remote locations, recorded training sessions are being sent,” said Uma Sivaraman, consultant, CBSE and former deputy commissioner at Kendriya Vidyalaya Sangathan, Ernakulam.

Ritu Puri, principal at the School of Excellence in Dwarka, said that the schools have tied up with Career Launcher and the Khan Academy. “The marathon preparation started even before the lockdown was announced. The lessons were carefully planned keeping in mind the learning outcomes in a closed-door environment. Since access to technology isn’t an issue here, digital learning has been received with great enthusiasm by parents and students alike. Worksheets were sent through WhatsApp and DVDs with educational content distributed to parents in a staggered manner. Initially, even the tech-savvy teachers had teething problems handling the virtual classrooms on Zoom, but the issues settled later. Through the last few months, we have managed reading sessions, poster-making competitions, physical activities and yoga classes. All through this, we have kept in touch with parents,” she said. 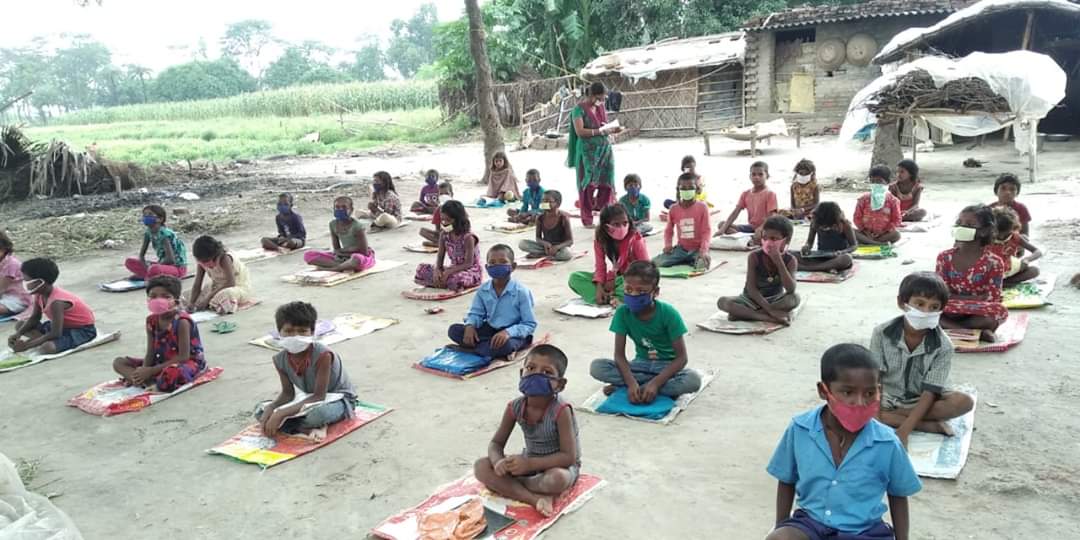 Podcasts becomes the voice of the pandemic

CBSE’s podcast Shiksha Vani, where more than 350 audio files had been uploaded in English and Hindi for different subjects, and the DIKSHA app, a repository of academic content for students with question banks, mindmaps and various other engaging learning material, saw an increase in participants.

Biswajit pointed out that all this cannot replace the in-person teaching in a classroom, but online education is the next best alternative at present. “The focus should be on skill development and not just heavy academic content. Parents should remember that a kitchen could also be the perfect class for honing life skills,” he said.

Noting a paradigm shift in education, Urmila Guliani, education consultant and former principal, Kendriya Vidyalaya, said, “The involvement of three major stakeholders – students, teachers and parents – has seen a big change, for what had been a closed-door experience of just the teachers and students. It has now been exposed to a virtual community that includes parents. Teachers have risen to the challenge with fortitude by getting accustomed to the new digital lessons. For the following six months, children might not be going to school daily and education might as well go virtual,” said Guliani, who continues to teach underprivileged children after her retirement in New Delhi.

A study surveying 42,831 students across 23 states conducted by the NGO Smile Foundation and released on June 13 had found that 56% of children had no access to smartphones, the quintessential tool to e-learning, during the COVID-19 lockdown.

Manju Tiwari, NCERT counsellor and teacher at Kendriya Vidyalaya, New Cantt in Prayagraj, said that most of her troubleshooting involves anxious school children who lack digital access. Tiwari teaches physics, and said that unfortunately, those students who do enjoy access to technology lack the seriousness required. “Continuously staring at the screen can get strenuous, but we cannot let young minds be idle and therefore have to productively engage them in learning,” she said.

Also read: In Tamil Nadu, There Are No Easy Answers for the Private School Fee Dilemma

College students are not exempt from these concerns. Professor Geeta Sahare, deputy dean and mental health counsellor on the Delhi University helpline, has been getting calls from helpless students from the remote parts of Bihar and Uttar Pradesh, who are unable to attend webinars or access official communication and learning material.

“As the pandemic is here to stay, instead of banning online classes, an initiative like donating unused smartphones to the neighbourhood kids who cannot afford the same can be taken up to bridge the digital divide,” said Biswajit.

Around one lakh teachers across Telangana have been unpaid and rendered jobless since March, according to Sheik Shabbir Ali, president of the Telangana Private Teachers’ Forum.

Sapa Pandari from Bhainsa town, Nirmal district of Telangana has a slew of degrees to his name –  MA B.Ed., TPT, D.Ed. The 37-year-old has been teaching Telugu for over 15 years. Both Sapa and his wife, Shilpalatha Pandari, a maths teacher, had been working in the Vivekananda High School for the last three years. 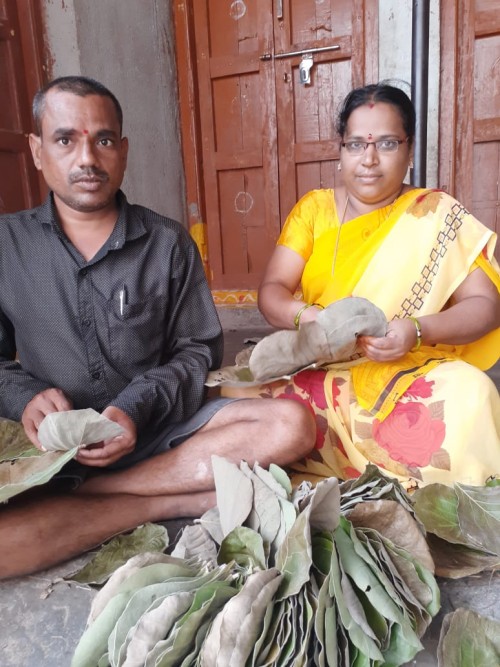 During the lockdown, the couple is stitching sal leaf plates from morning to night and earning around Rs 100-150 per day. They used to be paid Rs 15, 000 and Rs 6, 000 per month respectively, but have not been paid their salaries for over three months. They somehow managed to put together the fees for their two school-going children.

Around 20 teachers from the Vivekananda School haven’t been paid for over three months, with the management citing a lack of funds. Now, the couple sits from 10 am to 10 pm to stitch 100 leaf plates, earning a rupee for each plate. “We sell them to the tiffin centres, who sometimes find our rates an overestimation as they can get cheaper plastic plates which are sturdier,” said Sapa.

Last year, Balaraj had received the Best Hindi Teacher Award from MLA T.Rajaiah in Siddipet district, Telangana. Balaraj, a teacher at the Sahasraa High School, was sacked two months ago, when he asked the management to pay his salary even during the lockdown. His wife, who worked in the packaging unit of a biscuit manufacturing company, lost her job too.

Balaraj then trained under a hotel employee for ten days and started his own chilly bajji stall (a deep fried snack), which saw no returns because of the lockdown. The Hindi teacher then worked as a construction labourer for five days, at the end of which he was paid Rs 2, 000. On May 3, he filed a complaint against the school management at the local police station.

When contacted, Ramana Kumar, additional director, Department of School Education said that teachers who have been unceremoniously sacked or not paid their dues should make a written complaint to their respective district education officers, who would then take necessary action against the school management. 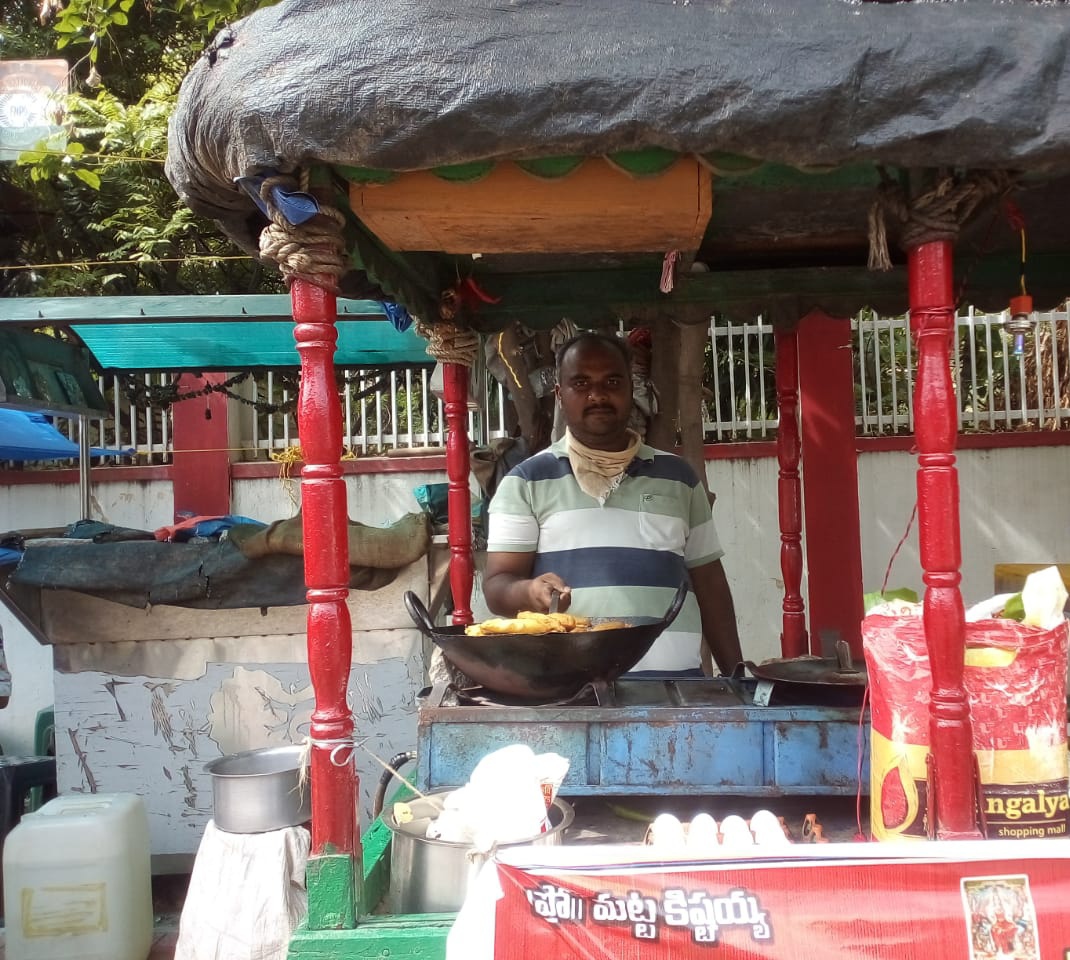 The parent and student volunteers of the pandemic

When the lockdown began, the WhatsApp group of parents from Aksharnandan School in Pune decided to look inwards with their philanthropy. They reached out to needy fellow parents with dry ration kits and called it the ‘Dhanya bank’ initiative. “As our school is an inclusive institution with students from all kinds of social and economic strata, we didn’t have to look far to help and the principal, Rashmi Pandit, made it a conducive process,” said a parent volunteer.

Vipul Singh, a fourth-year law student of JIMS Engineering Management Technical Campus, Greater Noida, has been offering free coaching for underprivileged children from government schools since 2016. Around 200-250 students are taught every year by Vipul and his team of friends. During the COVID-19 crisis, he adopted online teaching for Class X and XII students and reached out to students who lacked digital access with learning materials.