Told to Not Dissent Against Government, TN Students Allege Attempts to Saffronise Varsity

University authorities say Central University of Tamil Nadu is "above politics", deny any attempts at politicising the campus.

It's being alleged that Hindutva forces are trying to gain ground through educational institutions in the state. Credit: Special arrangement

Chennai: The recent circular issued by the registrar of the Central University of Tamil Nadu in Thiruvarur, advising students not to indulge in any ‘unauthorised activities against government policies,’ appears to be only the tip of the iceberg. Attempts to crush dissenting voices and saffronise the campus began over a year ago, according to current and former students of the university.

The university administration has termed these allegations ‘hyperbole and unwarranted sensationalisation’, saying that ‘it does not encourage or render any kind of support for individual political affiliations whether it is from students or faculty members’. “When a protest arises, it is the duty of the university to solve the issue and avoid an unrest,” a spokesperson from the university said in response to questions raised by The Wire.

The spokesperson added, “CUTN is above politics. There is no question of politicising the campus. We function as per the rules, regulations, statutes, ordinances of the university, and according to the UGC/MHRD guidelines. The circular was issued to avoid a political rally within the campus, when a situation of unrest was prevailing outside.”

The campus, which came into existence in 2009, was relatively peaceful until the Jallikattu protests. “Students came out in large numbers to express solidarity with the Jallikattu protest. We were let off the first day. But on the second day, we received a circular warning action against any protesters. We continued the protests but there was no action as threatened,” says a former student on the condition of anonymity.

More recently, when students protested against the quality of food served at the mess in April, the management sent letters to the residences of some protesters advising families to ‘rein in their children’.

But what perhaps came as a brutal shock to the student community was when a wing of the Akhil Bharatiya Vidyarthi Parishad (ABVP) was set up at the campus sometime last year. “We know for a fact that a faculty member is involved in setting up ABVP in the campus. Often ABVP meetings are held inside the campus, in the classroom of the Hindi department,” the student says.

Admitting that some students were also affiliated with the pro-communist Students’ Federation of India (SFI), the student, however, says the body had never carried out any activity inside the campus. “We formed a study circle called Freedom Speakers which had no affiliation but even then we were questioned about its purpose.”

The Hindi club screened Vivek Agnihotri’s Buddha in a Traffic Jam, but when other students sought to screen Anand Patwardhan’s Ram Ke Naam through the media department, they were denied permission.

The university, however, said that it ‘has not conducted any on-campus meetings for the ABVP.’ “The University has not set up wings for any political outfits on the campus. In fact, the university and its statutes are against it, as it could potentially affect academics.” 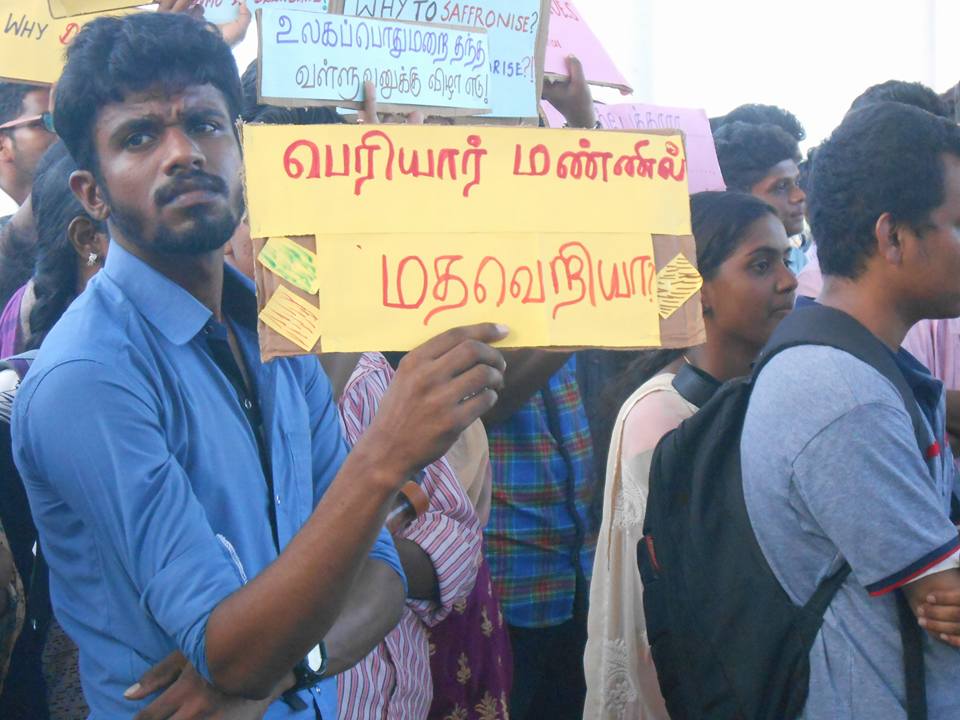 The Thiruvarur campus, which came into existence in 2009, was relatively peaceful until the Jallikattu protests. Credit: Special arrangement

Last year in August, the university management announced a competition to commemorate the birth centenary of Hindutva ideologue Deendayal Upadhyaya. The title of the essay competition – the relevance of Pandit Deendayal Upadhyaya’s political philosophy in the 21st century – invited the ire of a section of students who protested against what they said was an attempt at ‘academic saffronisation.’ “We took out a rally to express our dissent, we did not think of stopping it,” says another student. The competition was apparently held and cash awards given to the winners.

Admitting that the event was held, university said it was conducted under a ‘national directive’. “We have had events commemorating several national leaders, irrespective of their affiliation and ideology,” the spokesperson noted. However, details of other such events were not made available to The Wire. 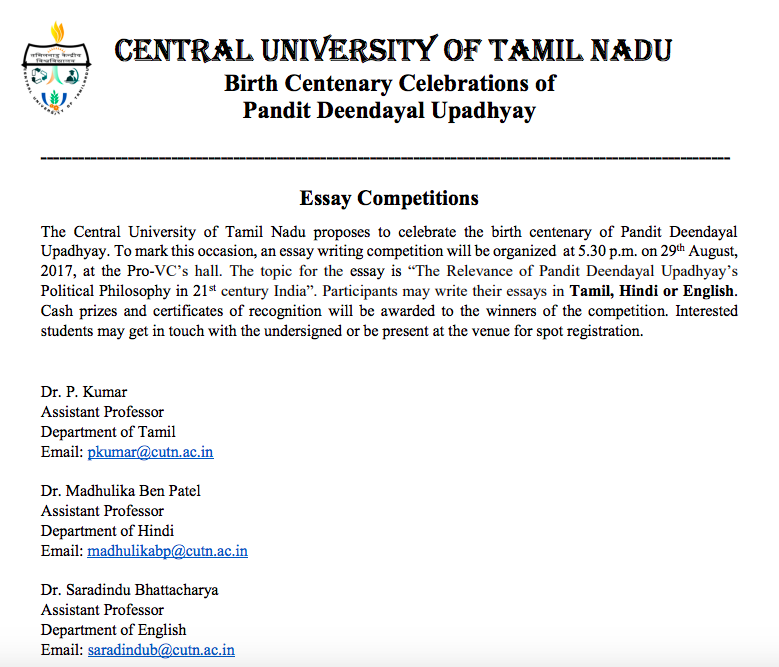 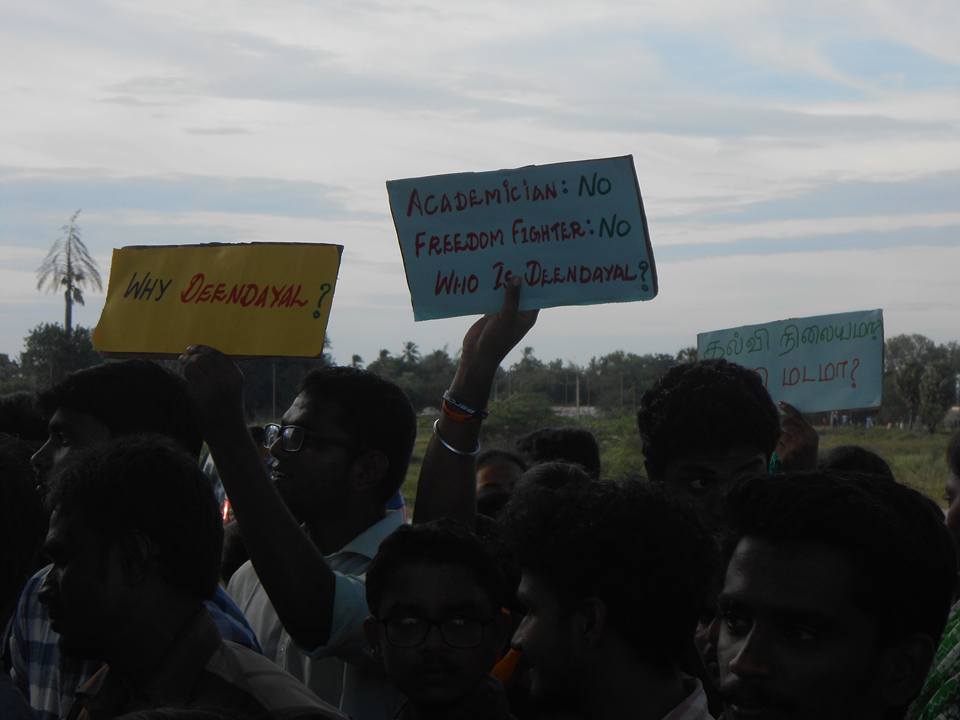 “Finding it tough to establish itself politically in Tamil Nadu, the Hindutva forces are now trying to gain ground through educational institutions,” says V. Mariappan, secretary of the Tamil Nadu unit of SFI. Pointing to a rally held months ago to commemorate the birth anniversary of Sister Nivedita, Mariappan says the BJP had used the rally to ‘communicate to over two lakh students.’

“While the ABVP could function openly in a campus like Central University in Tiruvarur, a student is being harassed only because he is affiliated with SFI. At least three vice-chancellors in the state today are right-wing apologists. It is sad that the ADMK government is turning a blind eye to this blatant academic saffronisation in Tamil Nadu.”

Refuting Mariappan’s statements, the university said that statements related to the ‘functioning of ABVP in campus and targeting of SFI affiliated students’ are untrue.

Note: This story has been updated twice to include responses from authorities at the Central University of Tamil Nadu.