Protesting students say since the colleges are owned by people like Baba Ramdev, Union minister Ramesh Pokhriyal and Uttarakhand cabinet minister Harak Singh Rawat, the state government is not keen to act. New Delhi: For 44 days now, medical students have been staging protests at the Parade Grounds located in the heart of Dehradun city. They have led marches through the city, held relay hunger strikes and have even had to be treated medically after clashes with police.

Why indeed are the students on this mission? Because of an almost 170% fee hike in private Ayurvedic medical colleges, implemented with retrospective effect.

The High Court of Uttarakhand had ruled last year that the fee hike order be reversed and the amounts already paid by students be refunded. Yet the orders of the court have not yet been implemented. 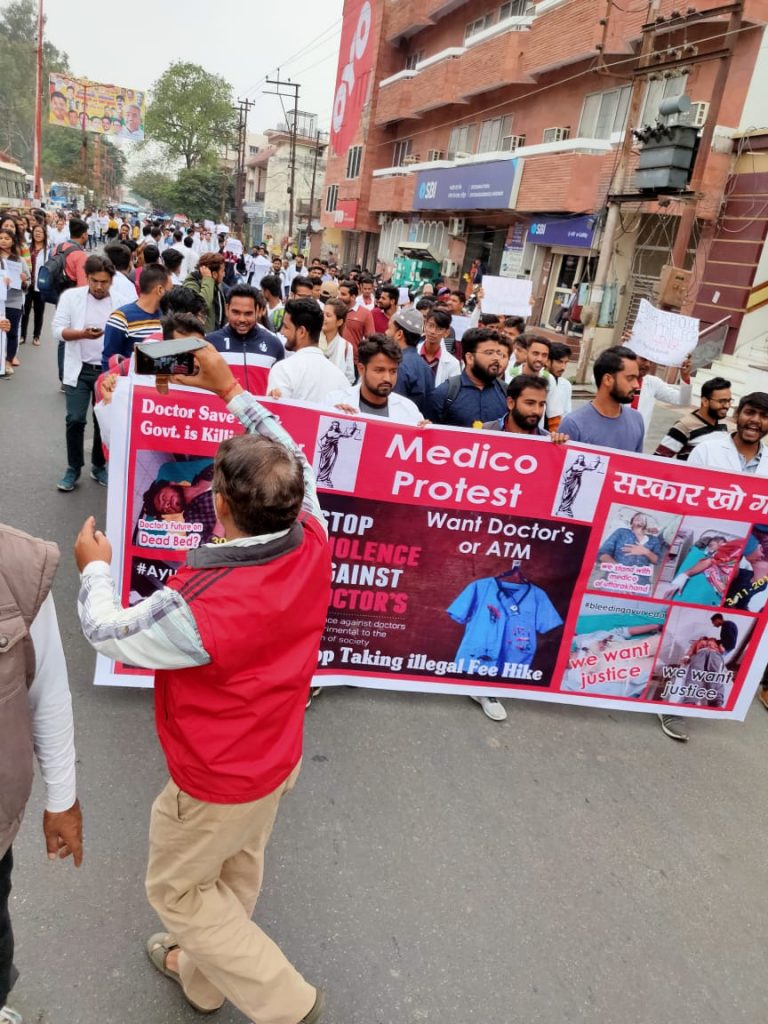 Several students of these colleges had then approached the Uttarakhand high court, arguing that the requisite process was not followed while taking the decision to enhance fees. Their lawyers argued that as per the Uttarakhand Unaided Private Professional Educational Institutions (Regulation of Admission and Fixation of Fee) Act, a committee including a retired high court judge has to deliberate and decide on the issue of fee hikes in private colleges.

That process, the petition said, was not followed by the Uttarakhand state government through its process of hiking the fee thrice.

The Uttarakhand high court in July 2017, ordered a stay on the levy of the hiked fee. A year later, on July 9 2018, the high court ‘quashed’ the order of the Uttarakhand government which led to the fee hike.

It also noted that the government and the universities are at liberty to raise fees but any increase must be based on the recommendations of the fee regulatory committee as enshrined in the aforementioned Act, and should only be prospective and not retrospective.

The court also said that if private colleges had already taken the enhanced fee from students, the money should be refunded within two weeks.

The colleges challenged this order but a bench of the Uttarakhand high court in October 2018 upheld the earlier decision.

“But, the colleges have not refunded a single rupee till now. In fact, they continue to demand the enhanced fee from students and bar them from sitting for exams if it is not paid,” said Lalit Tewari, a BAMS student and one of the petitioners.

“And since the colleges are owned by people like Baba Ramdev, Union minister Ramesh Pokhriyal and Uttarakhand cabinet minister Harak Singh Rawat, the state government is not keen to act,” Tewari added.

On October 22, 2019, the court issued a contempt order against the owners of certain private colleges including Ram Dev’s aide Balakrishna, seeking a response within three weeks.

The students have been demanding that the private colleges abide by the orders of the high court, and refund the enhanced fee that had been paid.

Congress too has voiced support to the protest and termed the non-compliance of the private colleges with the orders of the high court a ‘constitutional crisis’. The party has announced that it will meet with all the MLAs in the state and seek to resolve the issue at the earliest.

Interestingly, it was a Congress government which passed the order in the first place.