As Polls Loom, AAP Puts Faith in Schools Over Temples

The party's school reform agenda is more than a channel to appeal for votes – it is a medium to highlight its electoral priorities. 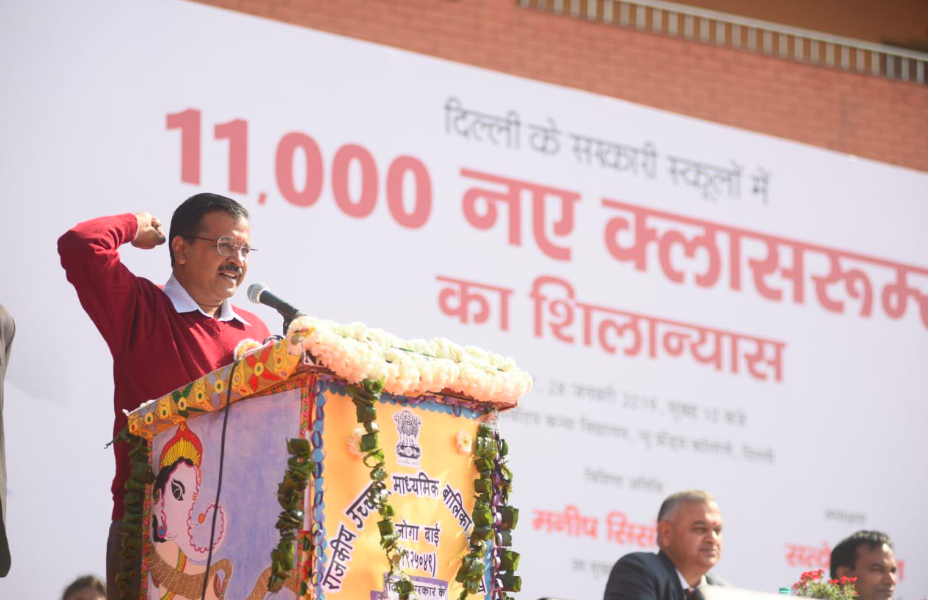 That evening saw the inauguration of 11,000 classrooms constructed across around 250 Delhi government schools. At the event, both Kejriwal and Sisodia lambasted the Modi government for blocking files to complete the project, and also thanked parents for voting them to power in the 2015 assembly elections. 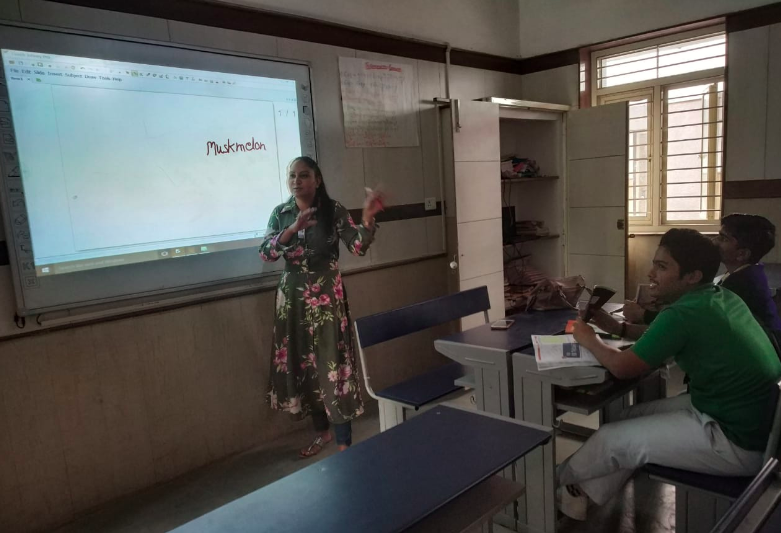 This is not the first time that AAP has placed education at the centre of its campaign for a major election.

A few months ago, the party inaugurated the Joga Bai Senior Secondary School with a mushaira, led by popular Urdu poet Imran Pratapgarhi who sang verses comparing AAP’s initiatives in education with BJP’s name-changing spree. Pointing at the newly-constructed school building to his right, he said,”Yahaan kaam ki sarkaar chal rahi hai aur vahaan naam ki” (Over here is a government focused on work and their’s is one focused on names).

As the audience broke into applause, Sisodia talked about how the BJP government has neglected the schools in their constituencies.

Sisodia has explicitly raised the politics of education over the politics of temples, suggesting that a university be built instead of a temple at the disputed site in Ayodhya. Apart from offering such education-oriented solutions to heated political issues, the Delhi party is also expanding its outreach by engaging with prospective voters (parents, teachers, principal and alumni) through various reforms in Delhi government schools.

As part of the reforms for overhauling Delhi government schools, AAP re-constituted school management committees (SMCs) – comprising parents, teachers and principal – to provide constant feedback and act on problems faced by the schools. In 2017, each SMC was allocated a budget of Rs 5 lakh – to spend at their own discretion, without relying on any external aid.

“Our SMCs get special funds from Delhi government so that they can fix things on their own,” said Rajnikanth, a teacher at Government Boys Senior Secondary School located in Rouse Avenue, adding: “People say India doesn’t prioritise education like foreign countries. But look at how the Delhi government has transformed our schools.”

The strong bond between the SMCs and the party was visible on a banner hung at the entrance of Sarvodaya Kanya Vidyalaya no.3, Mandavali. It said: “Agar aapko school me koi samasya ho to SMC sadasya ko sampark karein” (If you face any problem at school, please contact our SMC members). The banner not only had pictures and contact number of parents and teachers but also of AAP’s Lok Sabha candidate for east Delhi, Atishi, along with Kejriwal and Sisodia. 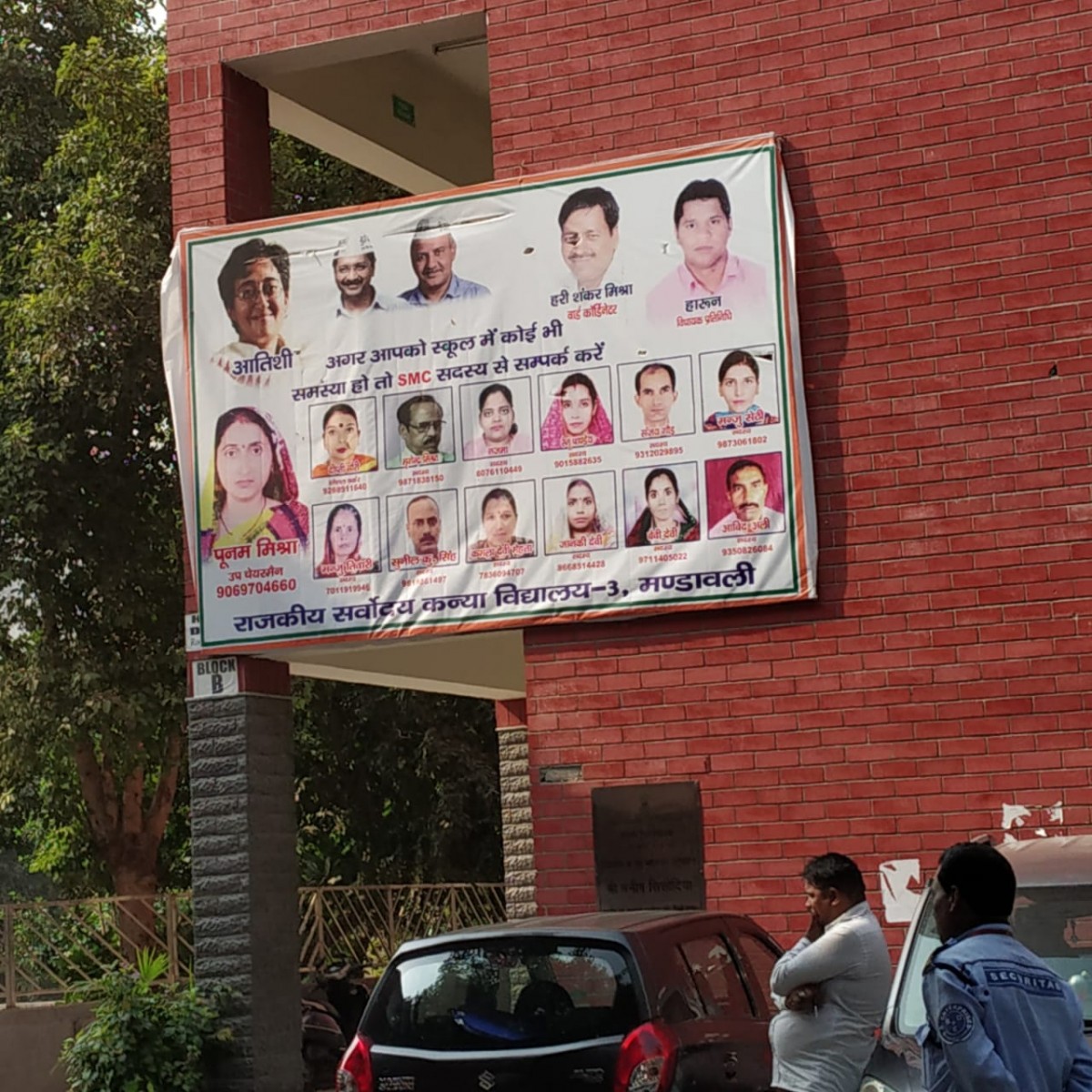 The banner at the entrance of Sarvodaya Kanya Vidyalaya no. 3, Mandavali. Credit: Tanya Jha

AAP’s posters, banners and social media posts usually carry the slogan, “Shikshit Rashtra, Samarth Rashtra” (educated nation, capable nation), implying that their aspiration is not just to revamp the state of education in Delhi, but also in the country, if given the opportunity.

On September 23, 2018, Sisodia announced that the party would organise alumni meetings to reconnect with all those who studied at Delhi government schools. The initiative is intended not just to help the party connect with first-time voters – recently graduated from these schools – but also with adults across different age groups.

AAP’s outreach to the privileged gentry of the capital, whose support it largely lost after the acrimonious exit of leaders Yogendra Yadav and Prashant Bhushan – the sophisticated faces of the party – is also typically centred around schools.

One evening in December, in the wood-floored basement of an elite address at Panchsheel Park, Atishi showed several before and after photographs of schools to an informal gathering of wealthy and liberal residents of the city.

She also took their questions about AAP’s plans regarding election strategies, alliances and so on.

The party has also asserted their commitment to improving healthcare, employment, women’s security and related issues through their school initiatives. The Delhi government’s Sahitya Kala Parishad conducts art workshops during summer camps. Regular menstrual awareness workshops and an internal complaint committee are in place to ensure the well-being of female students and the entrepreneurship curriculum aims to teach real-life skills to students and prepare them for the future.

Taken altogether, AAP’s school reform agenda is more than a governance priority or channel to appeal for votes – it is a medium to highlight its electoral priorities. 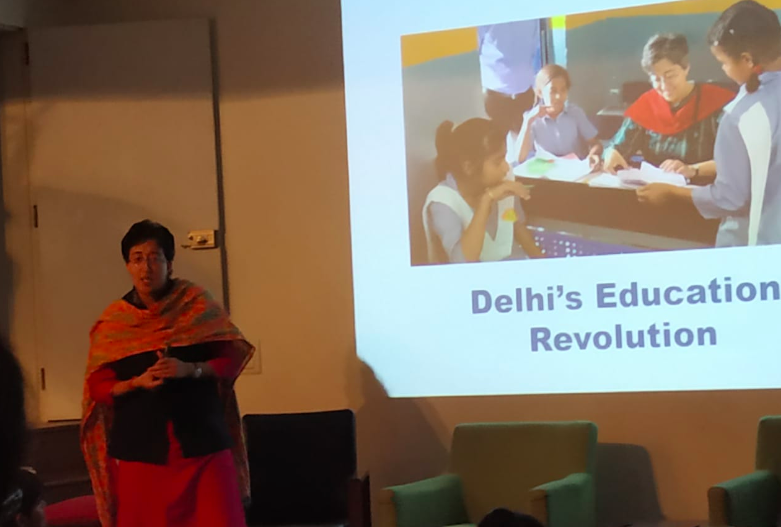 This is not the first time that a political party has built its electoral agenda principally on education.

“There is at least one precedent of education being a big political issue,” said economist Jean Dreze, who has written extensively on education and development. “In Tamil Nadu, when Rajaji tried to introduce ‘hereditary education’ and faced so much flak that he had to resign, Kamaraj replaced him and then transformed schooling in TN, with lasting benefits.”

In 1953, Madras chief minister Rajagopalachari (Rajaji) introduced a caste-based education policy, in which students would devote half of their time learning community-specific skills. The DMK, DK and Congress opposed the idea, and Congress leader Kumaraswami Kamaraj won the election in 1962, promising to revoke Rajaji’s education policy.

Popularly known as ‘kalvi valla’ (loosely translated as ‘benevolent educator’), Kamaraj reopened 6,000 schools which Rajaji had shut and launched a free mid-day meal programme. The programme was later implemented across the country.

While Kamaraj opposed caste-based education policy in Tamil Nadu in the 1960s, AAP has been vigilant about the subtle segregation of students based on religion. On October 10, 2018, the Delhi Commission for Protection of Child Rights issued a notice to an MCD school in Wazirabad for grouping Muslim students in a separate section.

Sixty-two years after Rajagopalachari’s education policy was floated, AAP won the Delhi assembly elections in a historically unprecedented sweep and directed much of that political capital at improving government schools and exploring progressive education. The 2019 elections will reveal whether constructive efforts directed at schools, rather than temples, can indeed translate into a voter base.