"The administration must answer the question about how such lethal weapons are easily available on campus." 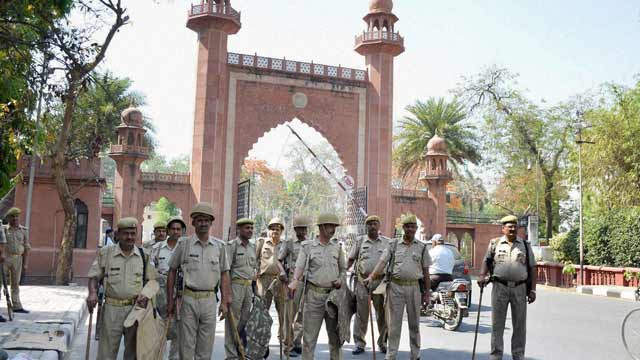 Aligarh: In a fresh incident of campus violence, a research associate at Aligarh Muslim University (AMU), Syed Mohammad Waseem, was critically injured after being shot on January 25. He has been admitted to Gurugram’s Medanta Hospital and his condition is critical. An FIR has been filed against three accused – Tabrez, a PhD scholar, and two other who are not students at the university, Sami Shakir and Zeeshan.

According to the FIR, the research associate in the Geology department was on bike accompanied by a pillion rider, Khaliquzzaman. Waseem was stopped by the accused but he managed to escape. Suddenly a bullet hit his shoulder and he lost his control and fell on the ground. Taking advantage of this, the accused reportedly grabbed the victim and beat him. This led to a severe head injury and internal organ damage.

The gruesome attack on Waseem is an addition to a horrific series of campus violence. In April 2016, clashes caused massive destruction on campus, and claimed the lives of Mehtab and Waqif. While Mehtab had been expelled from the university on charges of indiscipline, Waqif, who had completed school, had been residing near campus.

Recently, in September 2017, Nadeem Ansari, a student and former vice president of Aligarh Muslim University Student Union (AMUSU), was reportedly attacked with a sharp weapon following a brief argument with another student.

In another incident, former diploma student, Tauseef accidentally shot himself and died while fiddling with a country-made pistol in his friend’s hostel room in Sir Ziyauddin Hall. In 2015, Alamgir, a student leader who was in his final year of bachelors in social work, was also shot dead on campus.

These incidents and conversations with some students of the university give an idea of the pattern of violence. In most of the cases, the violence was against student leaders and the perpetrators were outsiders. Though there have been other issues – like the illegal entry of non-students to hostel rooms and the free movement of outsiders on campus. These instances pose some serious questions about the safety and security of the students.

Abdullah (name changed), a student, who agreed to speak on the condition of anonymity, said that such violence is the result of the poor state of affairs on the part of AMU’s administration. He said that outsiders (non-students) freely roam in and around the campus and sometimes openly go on rampage, threatening students and hostellers.

Tabrez Ahmad, an AMU alumnus, also blamed the administration. He said, “Non-students get entry into the campus because of some local students and sometimes few local influential teachers facilitate their entry. They (outsiders) do not only try to intervene into internal affairs of the university but also intimidate the students. This leads to a hostile atmosphere in the university premises and claims lives of common students.”

Tabrez said, “Most of the time the administration tries to cover up the issues of violence. The incidents of campus violence is seldom reported in national media because administration do not let the students go out and speak over such issues.”

In Waseem’s case, Tabrez’s claims appear to be true to some extent. Most students, when contacted, said that they felt bad for Waseem but when asked about the violence, they chose to remain silent. Another student, also speaking on the condition of anonymity, said that anyone who dares to speak about such issues is generally suspended on frivolous grounds.

Another matter of concern was a student who talked of a ‘pistol in the hostel’. Some students say that sometimes outsiders get shelter in the hostel through local influence. A few of them carry pistols and create a furore on campus.

Earlier this month, additional city superintendent of police (SP), Aligarh, Atul Kumar Srivastava, had written a letter to the university administration raising similar concerns, and requesting the administration to keep vigil on illegal and unauthorised entries.

AMUSU president Maskoor Ahmad Usmani said, “The brutal attack on a research associate exposes official’s claims of ‘no trespass’. We have demanded a fair probe through a high level enquiry committee and immediate arrest of the perpetrators. We have also made request for installing more CCTV cameras and the replacement of defunct one to make campus fully secure.”

Proctor Mohsin Khan has expressed deep concerns over the repeated incidents of violence. He said, “We condemn such violence. FIR has been lodged. CCTV footages are being examined, we are in touch with the police and trying our best to nab the culprit as soon as possible.”

Despite Khan’s assurance of a fair and fast track enquiry, students do not seem convinced. Some said that on earlier occasions too, students had been targeted and some killed, but nothing had changed.

The university has four operational gates. Locals use different gates to reach the end of the campus that opens up to residential areas and a market. According to the proctor, unlike various other central universities, AMU has many porous pathways. The university has specifically directed campus security personnel to keep an eye on unsocial elements via proper frisking and ID checks.

Nadeem, another alumnus of AMU and Waseem’s brother-in-law said, “The administration has failed to address students’ safety concerns thus the campus is becoming unsafe day by day. The administration must answer the question about how such lethal weapons are easily available on campus. The perpetrators are not dealt (with) sternly and such a passive attitude on the part of the university administration emboldens unsocial elements to commit such crimes again and again. The university must take the strictest possible action to ensure that the campus is completely sanitised from such elements and a true academic atmosphere can be restored.”

He said that the backlash seen at Jawaharlal Nehru University and Delhi University campuses over the infringement of students’ rights and crimes against students is unfortunately absent in AMU. He also pointed a finger at the media: “The media reports minor cases of the alleged involvement of AMU students in petty crimes but when university students are deliberately targeted by miscreants, the media keeps quiet treating the matter as a routine crime story.”

AMU, established in the early 19th century, is known for its academic excellence. It has garnered a reputation for spreading peace and value education, and such untoward happenings not only puts the university’s legacy at risk but also creates a nuisance to the academic ambience.