The overall enrolment for professional courses has reached a four-year low led by an 11% fall in the number of students in B.E. and B.Tech programmes. 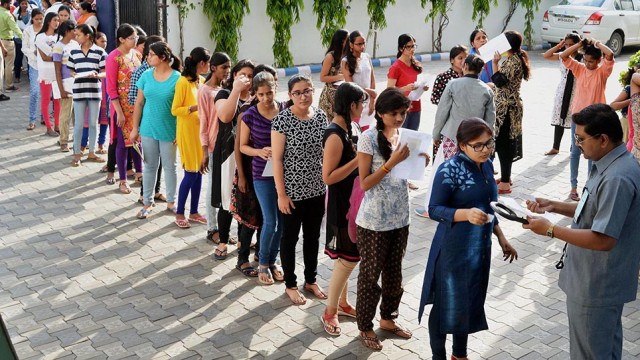 A representative image of students queuing up for an exam. Photo: PTI

New Delhi: Students enrolment in higher education has grown considerably during the last five years, from 3.42 crore in 2014-15 to 3.73 crore in 2018-19, according to the latest All India Survey on Higher Education released by the Ministry of Human Resource Development (MHRD) on September 21.

The 2018-19 survey is based on responses from 944 universities, 36,308 colleges and 8,354 standalone institutions. First undertaken in 2011, the survey aims to provide a better understanding of higher education in the country.

The big picture: 79.8% students are enrolled in undergraduate programmes but only 10.8% in postgrad programmes, attesting to the leaky pipeline of higher education. A little over 80% of all students in higher education study only 10 programmes out of about 187. The survey also states that 60.53% of total colleges are located in rural areas and 11.04% are exclusively for women.

The survey found that Scheduled Caste students make up 14.9%, Scheduled Tribe students 5.5% and students from other backward classes 36.3% of the total enrolment. Additionally, the document states, “5.2% students belong to Muslim minority and 2.3% from other minority communities”.

The data also indicates a four-year-low in the overall enrolment for professional courses, with a significant dip in the number of B.Tech and M.Tech programmes. Enrolment in B.Tech and B.E. courses fell 11.3% from 42.54 lakh in 2014-15 to 37.70 lakh in 2018-19. The decline in master’s degree enrolment for the same period was more than half – from 2.89 lakh to 1.35 lakh. On the flip side, the enrolment in some other professional courses like education, medicine, management and law increased.

The total number of foreign students came to 47,427, from 164 countries, lower than the corresponding figure of 47,755 in 2016. Both numbers are very low relative to the “enormous size of the higher education sector”, to quote from a previous report on The Wire. But together with the fact that more than 11-times as many Indian students study abroad, the decline doesn’t bode well for the MHRD’s ‘Study in India’ initiative in particular.

Finally, the survey paints a dismal picture of research in the country. Only 2.5% of colleges have PhD programmes and PhD students made up less than 0.5% of the total enrolment. The number of students increased in absolute terms, however: from 1.17 lakh in 2014-15 to 1.69 lakh in 2018-19. Doctoral programmes in the sciences have the most candidates, followed by engineering and technology.