The ABVP in-charge of the Central University of Jammu, however, claimed that a clash over "personal issues" was being portrayed as one due to ideological differences.

Jammu: Kerala students at the Central University of Jammu have claimed that they were bashed and threatened by a group allegedly belonging to the ABVP after their performance in a cultural festival, UDAAN on April 12.

Following the tussle between the two groups of students, the university website was hacked by a group of hacktivists called ‘Kerala Cyber Warriors’. The website is currently down and the page reads: “Site upgrade is in process. Please visit us later.”

The group, as per its Wikipedia page, was founded by ‘GH057_R007’ in October 2015. This group has previously hacked various Pakistani government websites in retaliation to the country’s treatment of Kulbhushan Jadhav. They have also hacked websites of the Bangladesh government.

The hackers posted on the website that some “brainless” ABVP-RSS students on campus “thrashed our Kerala students” and labelled them “beef-eaters, JNU sympathisers, anti-national”.

In their message, the hackers also stated that when the students tried to lodge a formal complaint, they were stopped by vice-chancellor Ashok Aima, who said: “If you complain, you will not be allowed to write the exam.”

The hackers have demanded the dismissal of the students involved in the incident as well as the vice-chancellor. They have also threatened the university administration with ransomware attacks.

Furthermore, the hackers have posted the recipe for beef curry on the university’s official website. 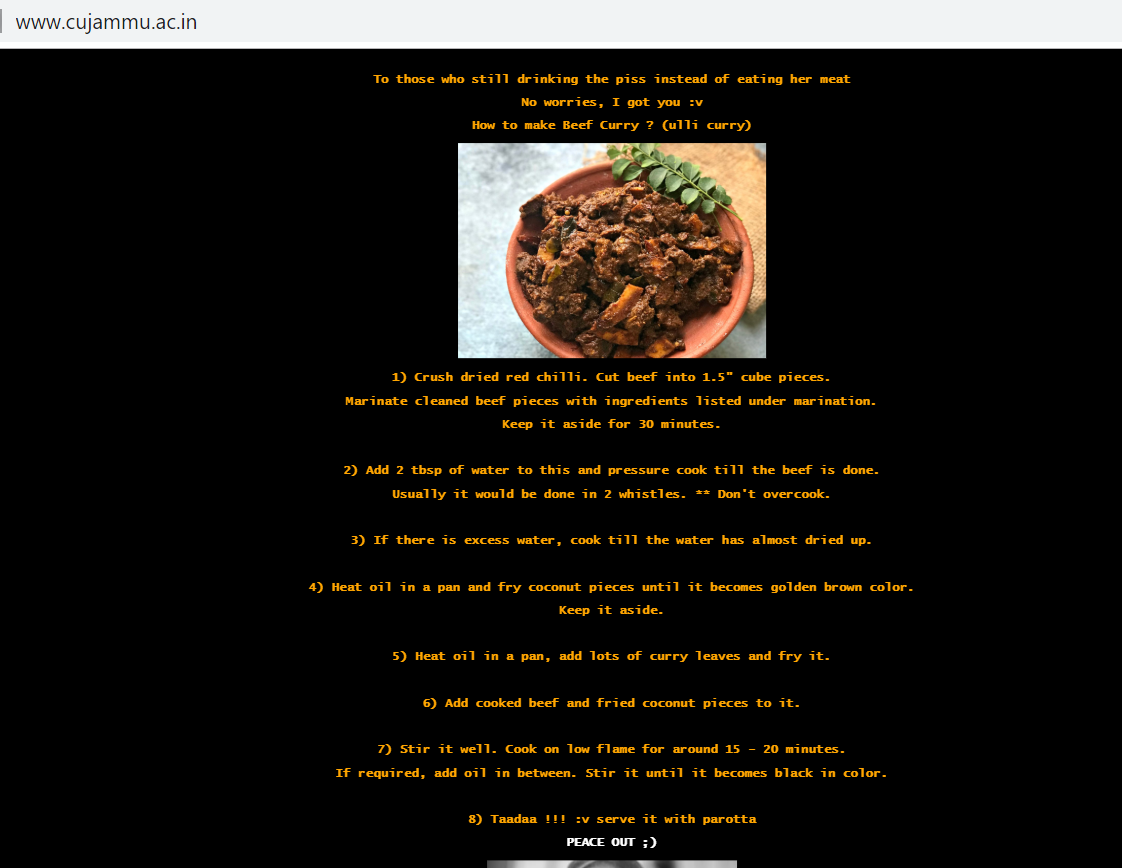 One of the Kerala students involved in the tussle said, “We never got a chance to talk to the vice-chancellor since the warden and other officials intervened. We don’t know who is behind this hacking but it will make our lives more difficult. Our problems were on the verge of being solved. I don’t know who has done this hacking and why.”

The vice-chancellor, Aima said, “Some students have been alleging but there was no thrashing and no one got beat up. These are election times so these stories are being cooked up. As of now, I haven’t been approached by anyone and no one has formally complained. I am aware that the website was hacked. But these incidents are just happening for furthering the cause of some candidates during elections.”

The ABVP in-charge of the Central University of Jammu, Mukesh said the clash following the folk dance on April 12 was between a group of Jammu students and ones from Kerala “over some personal issues”.

“I was a witness to the clash and I know that no one got badly beaten. The Kerala students were intoxicated and though the Jammu students started the fight, they were the ones who got injured afterwards. The Kerala students did not get injured,” he explained, adding: “Moreover, ABVP or RSS had no role in it. They are making a big issue out of it alleging that the tussle was because of ideological difference or them eating beef, but it is not so. It is unfortunate that this has happened even after things were on the verge of getting resolved.”