Monday's demonstration by ABVP was in protest against the alleged attack on BJP minister Babul Supriyo. 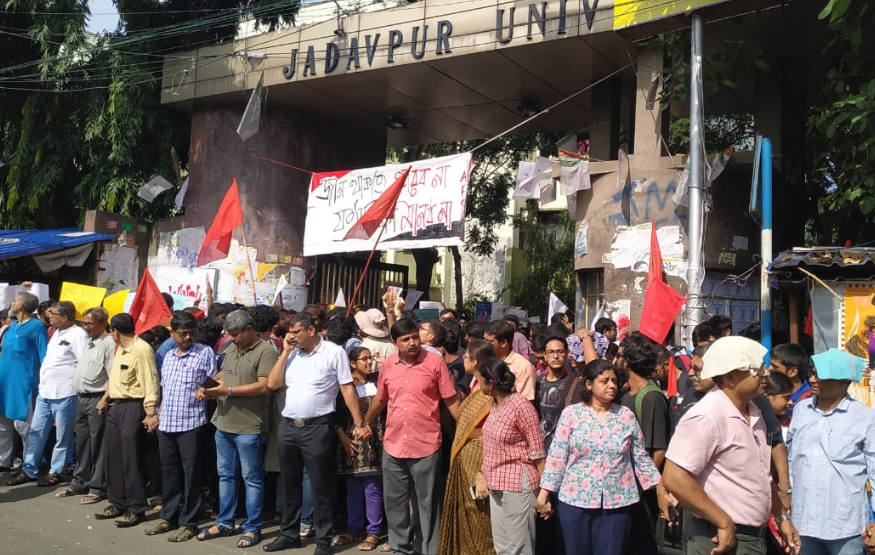 Meanwhile, teachers of the university formed a human chain in front of the Gate 4 of the campus in a show of resistance against the march. 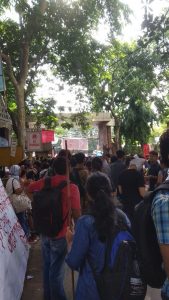 Students on the university’s side of Gate 4. Photo: Amrita Mukherjee

“Students and teachers had decided that peace was to be maintained on Monday, but that ABVP could not be allowed inside the campus. Gate 4 is where we all assembled in protest,” Amrita Mukherjee, a project fellow at the university’s School of Media, Communication and Culture, told The Wire. On Friday and Saturday, students took out peaceful protest marches in south Kolkata.

ABVP, a rightwing students’ organisation that is understood to function as the youth wing of the BJP, had not been a key player in JU’s campus politics until this year. Earlier too, students and teachers have stood up against attempts by the group to set up base in the university.

“This was not the first time this (teachers supporting students in political demonstrations) happened; there were two such occasions in the last couple of years. It was important that the teachers stood at the gates, given what happened last Thursday,” said Abhijit Gupta, professor of the university’s English department.

On Thursday, ABVP had reportedly organised a freshers’ welcome event which Supriyo, who joined BJP in 2014 and has since grown more visible in Bengal, was scheduled to address. ABVP and Supriyo have alleged that the latter was manhandled and heckled by students and prevented from speaking.

Students meanwhile, have accused Supriyo of misbehaving with students, the vice-chancellor Suranjan Das and aggravating the issue. The Arts Faculty Students’ Union of the university has filed an FIR against Supriyo.

Monday’s rally was in protest against the alleged attack on Supriyo on Thursday. ABVP activists had said that they wished to meet the VC and put forth an appeal for justice against the events of September 19.

The rally reportedly started at south Kolkata’s Gariahat, progressed down Gariahat Road (South), but was stopped at Jodhpur Park, around 2 km away from one of the University’s main gates.

Angered, the ABVP activists pelted stones at police officers and tried to break barricades. Videos have been doing the rounds on social media which shows them charging at the barricades. The demonstrators are also understood to have raised slogans against the Trinamool Congress government.

Clashes erupt between police forces and #ABVP workers outside the #JadavpurUniversity campus as the protest rally in #WestBengal begins. pic.twitter.com/VvonsFHwe9

Supriyo has blamed both ‘leftists’ and the ‘TMC government’ for the alleged attack on him. The students’ protests have taken on protracted significance, especially in the light of BJP’s efforts in Bengal, after winning an unprecedented 18 seats in the state in the 2019 Lok Sabha election.

On Saturday, Supriyo allegedly called the editor of a Kolkata daily, asking it to apologise for its reportage of the JU incident. When the editor refused, Supriyo called the paper as one running on “Didi’s advertisement money.”