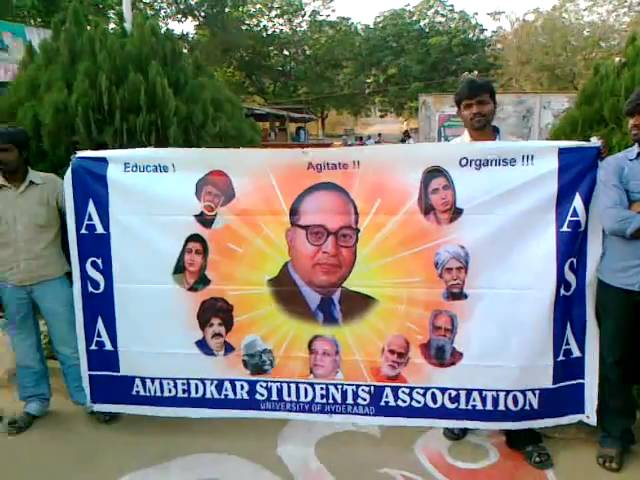 A file picture of a banner of the Ambedkar Students Association

A group of 189 academics and scholars are sending a letter to President Pranab Mukherjee asking him to take steps to ensure, inter alia, that the Vice Chancellor of Hyderabad University is dismissed and Rohith Vemula’s family is given an ex-gratia payment of Rs 50 lakhs:

We, the undersigned teachers and researchers of Central Universities, research institutes and institutions of higher education in India, and independent scholars appeal to you to intervene with the MHRD and the Government of India to ensure the constitutional right to life and liberty and the freedom to educate, organise, and agitate are upheld in all educational institutions.

The death of Rohith Vemula of the University of Hyderabad is a grief that is impossible to bear, made even worse with the revelations that the toxic mix of anti-Dalit, Hindutva-inspired exclusionary politics that took Rohith’s life involved at least two ministries of the Central government, and a Member of Parliament of the ruling party. This incident also foregrounds the disastrous consequences of the lack of institutional autonomy in institutions of higher education, and the resultant lack of accountability to the university community of those entrusted with the responsibility for administering them – in this case, the Vice Chancellor and his entire administrative machinery.

As teachers, we are deeply aware of the many challenges that higher education faces in India today, including the fact that our university spaces have had, and in many cases continue to have, an exclusively upper-caste character that is downright hostile to the well-being and education of marginalised sections –Dalit, adivasis, women, religious and sexual minorities. In our struggle, through our teaching, research and administrative duties, to refashion institutions of higher education into democratic spaces substantively accessible to the most downtrodden in our society, we draw upon the resources created by the social engagement of marginalised groups both within and without the University.

Students’ groups that give voice to critiques of the violence of caste, class, and gender hegemonies and religious majoritarianism, and instill in each student the self-belief that (s)he can “travel to the stars,” are integral to this process of social transformation and if anything, the most constitutional of all.  To label Ambedkarite groups “casteist” and to accuse those that campaign against the death penalty of being “extremist,” “terrorist” and “anti-national” displays an ignorance of the philosophical foundations of human dignity.  Universities and institutes of higher education have a critical role to play in the development and understanding of philosophies of resistance and justice.

Far from fostering equality of access and opportunity in our universities, the government of India has, over the past year and a half, repeatedly assaulted the autonomy and freedom of university spaces and their constituents. The expulsion of five student activists, one of whom was Rohith Vemula, of the Ambedkar Students Association in the University of Hyderabad is both one of a long string of such violations and a cataclysmic one, as a promising young academic and Dalit activist ended his life. The trail of letters made public show not only the direct official involvement of the MHRD in relentlessly haranguing the university to take action against these student activists, they also demonstrate a contemptible interest in bolstering the fortunes of the student wing of the ruling party, the Akhil Bhartiya Vidyarthi Parishad. This naked meddling in the internal affairs of a university is deserving of censure in itself, but the fact that these partisan interventions resulted in a total suspension of the principles of natural justice in the university response to these directives — the five ASA scholars were punished without a hearing — shows that the MHRD and the UoH administration have scant respect for justice and the rule of law.

It is also in order here, to underscore the fact that there has been a string of suicides by Dalit research scholars in the University of Hyderabad under successive administrations.  This is the decimation of an entire generation that has struggled to break through in an extremely hostile social environment, to enter the university, believing that its portals will deliver the promise of liberation, only to find that the only plea they can make is for a length of rope in the room of every dalit student and euthanasia (as Rohith wrote in his letter to the Vice Chancellor last month).

Rohith Vemula lost his life at the hands of a callous university administration that was instigated to act thus by the central government. Even in death, he was not accorded the dignity that should accrue to all human beings and citizens of this country — his body was not handed over to his family and friends and hastily cremated by the police. Further, the vice-chancellor of the UoH, in a complete breach of responsibility, left the campus within an hour of Rohith’s death, and there has been no university administration in place in the crucial period following the death of a student on campus.  Although he is faced with the death of a student under his watch, and as a direct result of actions undertaken by him, the Vice Chancellor has refused to meet Rohith’s mother and offer an official explanation in person of the circumstances leading to the death of her son.

In his final letter, Rohith asked those who wished him well, not to weep for him. He was right: this is not the time for tears but for decisive action on your part. We demand your urgent intervention to ensure that the following steps are immediately taken: