The protests are against the lack of school facilities, the shortage of textbooks and teachers, the quality of teaching, casteism, the lack of toilets in schools and police violence. 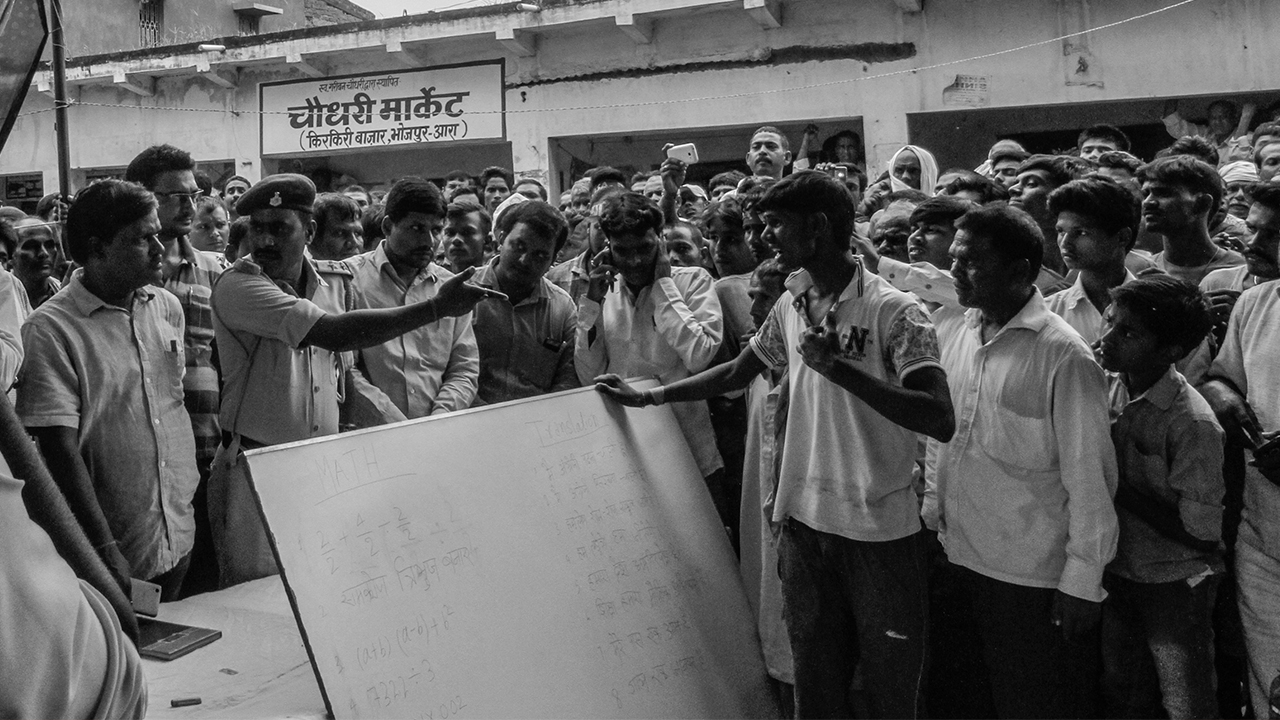 Students from government schools, almost all from poor, Dalit and Muslim families, have started to hold symbolic classes on the streets of Bhojpur with the help of the local chapters of AISA-RYA and the newly formed Bhagat Singh Yuva Brigade.

They are protesting against the lack of school facilities, the shortage of textbooks and teachers, teachers who don’t show up, some teachers who only teach for an hour, the quality of education, casteism, the lack of toilets in schools, schools with toilets which are always shut and even police violence.

In the school in Ahile in Agiaon block, Dalit students were made to clean the toilets with their hands by their teacher. When the matter was brought before the block education officer (BEO) Heeralal Singh in the protest ‘class’ at Azeemabad, he claimed that he cleans his own toilets and even makes his children clean the toilets, much to the jeering of students and protesters.

The school in Jhura Mushahari in Khopira panchayat, where Ranveer Sena founder Brahmeshwar Singh was mukhiya, is semi-constructed and has been this way for the last five years. In the school in Bhatoli in Sandesh panchayat, the high school lies derelict and another school that was built recently has no teachers.

The protests were initiated in phases across Bhojpur in Agiaon block in mid-April and has often been patronised by members of the administration, from the block development officer (BDO) to the secretary of the district education officer. The students are brought to the sites by their parents, appointed-guardians, members of AISA-RYA or village heads. Girl students from the 9th and 10th grades sit in the front row while boys and younger students sit at the back. They sit in protest for three to four hours with posters of Babasaheb Ambedkar, Bhagat Singh and Rohith Vemula and listen to members of AISA and RYA give speeches on the political climate and education standards. They hold a symbolic class on math or english.

The protests at Sahar and Azeemabad that The Wire attended, the courage to speak was found to be one of the biggest contributions the protests had imbibed in the students. When one of the organisers asked, “Has this BDO you see here ever come to see how your schools run?” The children responded with a loud resounding, “Nahi!”

The state officials seem to be at a loss about how to respond. At times they respectfully speak to the teenagers and their parents. When the Azeemabad BEO claimed that the scheme for special needs for the weaker students was not in his mandate, the organisers said, “This is what the people are asking for and you need to start writing to your seniors asking for it.”

The protesters have a list of teachers’ names who threatened to remove their names from schools and expel them, details of irregular payment of scholarships and of arbitrary collection of fees from students without receipts. At Chilhar school in Agiaon block, when teachers began to demand Rs 150 an Rs 200 for practicals and leaving certifications, without receipts, the students refused to pay and protested. The principal had called in the police who had lathicharged the students. The matter was again brought before the protest ‘class’ in Azeemabad, where the sub-inspector of Azeemabad police station, Raju Kumar, repeatedly said that there had been no violence. It was then that a student walked up to him and confronted him to resounding cries from all the other students present. The police officer was transferred to Rohtas district.

While members of the administration have attended meetings with the students, made promises, obviated issues, passed the buck and mostly complained that the matter was not in their hands, on July 25, the police filed an FIR against the organisers of the protests and a hundred other people under sections 147, 149 and 357 of the IPC in Pavna police station in Bhojpur. The prime accused is the president of Bihar RYA, Manoj Manzil, who had run for the Vidhan Sabha election on a CPI-ML seat and won 32,000 votes. He had been arrested on ‘politically motivated’ cases a few weeks before the election.

“When we were preparing for this, we went to dozens of schools to conduct basic math and english tests,” said Manoj Manzil, “And 99% of the the students in the 8th grade would get simple math equations like 2 + 2 divided by 2 wrong.”

“Children from upper castes, rich families and of government officials are sent to private schools and government schools are only for Dalits, Adivasis, Muslims, the poor, labourers and the oppressed classes,” Manzil said.

Every constable that The Wire interviewed at a protest in Sahar, said their children went to private schools.

Others against whom FIRs have been filed include Shivprakash Ranjan, a state secretary of the All India Students’ Association in Bhojpur and a student who narrowly escaped the burning of his hostel by Bhumihars in 2012, following the murder of Ranveer Sena founder Brahmeshwar Singh. “At the meeting at Sahar, teachers were sent to stop children from attending our protest,” Ranjan said.

“This shows how disturbed the administration is with the protests,” he added.