The survey was conducted by the National Commission for Protection of Child Rights after a report by Terre Des Hommes, an international development agency working in India.

New Delhi: Over 5,000 children in the age group of six to 14 years have abandoned education in mica mining districts of Jharkhand and Bihar, and a section of them have started working as labourers to supplement their family income, according to a government survey.

The survey was conducted by the National Commission for Protection of Child Rights (NCPCR) after a report by Terre Des Hommes, an international development agency working in India revealed last year that more than 22,000 children are employed as child labourers in the mica mining areas of Jharkhand and Bihar.

In a report based on the survey, the NCPCR said it has observed that a section of children in the mica mining areas are deprived of opportunities and have started working as labourers to supplement their family income.

The survey was conducted in the districts of Koderma and Giridih in Jharkhand and Nawada district in Bihar.

“As per the survey, there are 4,545 children in the age group of six to 14 years in the area of Jharkhand reported as not attending school,” the NCPCR said.

The survey on ‘education & well-being of children in mica mining areas of Jharkhand and Bihar’ found that 649 children in the same age group were reported as not attending school in Nawada district of Bihar.

The reasons for not attending school included lack of aspiration, lack of interest and also cases of collecting mica scraps, according to the survey.

Officials say selling mica scraps is the main means of livelihood for many families in these areas.

“Several families do not see the benefit of sending their children to schools and instead prefer them working in collecting and selling mica scraps,” an official said. 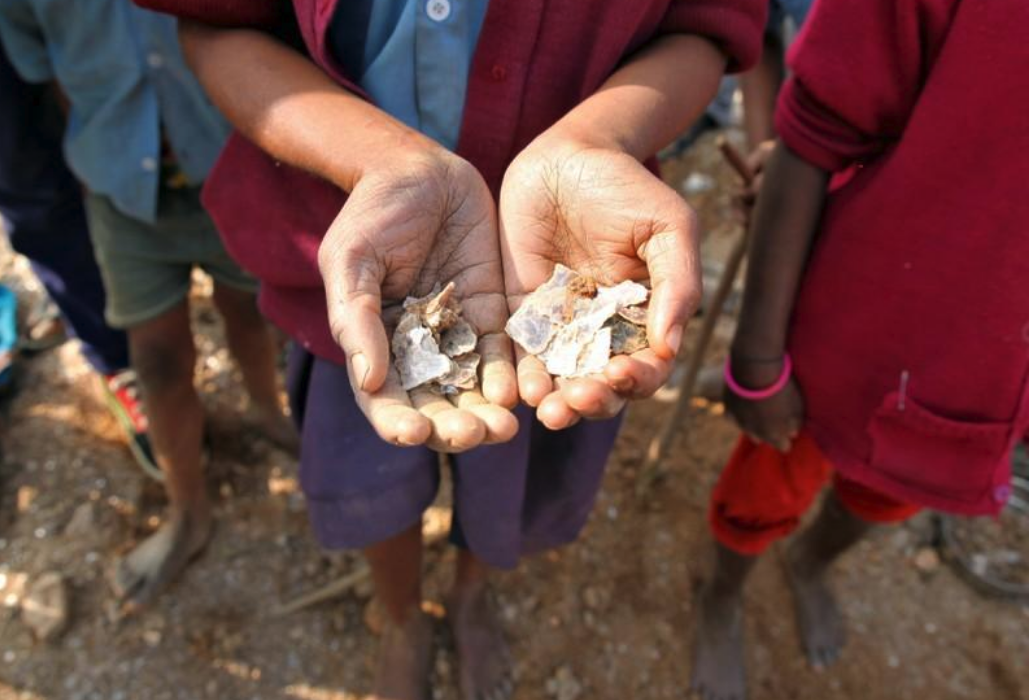 A girl shows some of the mica flakes she has collected whilst working in a open cast illegal mine in Giridih district in Jharkhand, January 22, 2016. Photo: Reuters/Nita Bhalla/Files

India is one of the world’s largest producers of mica, with Jharkhand and Bihar being the main mica producing states in the country. Mica is used in various sectors, including buildings and electronics, and even in cosmetics and paint production.

The objectives of the survey conducted by the NCPCR were to find out the educational status of children in the mica mining areas, number of children who are not attending school, whether children are involved in collecting mica scraps, if vocational trainings are provided to the adolescents, and the presence of NGOs in the areas.

The commission gave out a set of recommendations based on its findings. It said the supply chain of the mica mining and industry should be made free of child labour.

“No child to be engaged in any part of the mica mining process and collecting scraps. NGOs/development agencies should work with the local and district administration as well as with the industries to chalk out a strategy to make the supply chain of mica mining free of child labour,” the NCPCR said.

It said strict action should be taken against buyers of mica scraps from children, and said a special drive to abolish child labour in the mica mining areas of Jharkhand and Bihar should be carried out by the administration.

“Strict actions may be taken against the buyers who buy mica scraps from the children,” the commission said.

It also recommended the implementation of PENCIL scheme. “The PENCIL scheme (Platform for Effective Enforcement of No Child Labour) may be introduced and implemented properly in the district of Koderma and Giridih to help in effective enforcement of no child labour in the areas,” the NCPCR said in its report.

It said residential schools and hostel facilities should be made available in the mica mining areas to accommodate children who are not attending school.

“This will help in ensuring education of children who are out of school or not attending school. More residential schools under the schemes like Kasturba Gandhi Balika Vidyalayas (KGBVs) and Ashram Schools may be established in the areas,” the report said.

The NCPCR also flagged the issue of malnutrition among children in these areas.

“In case of Giridih and Koderma, the undernutrition cases reported in 14 per cent and 19 per cent of the habitations and villages, respectively in the survey area. In case of Nawada, 69 per cent habitations have reported that some children are undernourished,” it said.

The commission, however, noted that under the ‘Poshan Abhiyaan’, anganwadis and health workers are actively working towards addressing the problem of malnutrition.

“But the issue further calls for effective collaboration of all the stakeholder departments, development partners and NGOs at the local/habitation level interventions with the families and communities,” the report said.