To tackle black money that originates in the process of electing MPs and MLAs, the legal provision that freezes the number of Lok Sabha and state assembly states must be revisited. 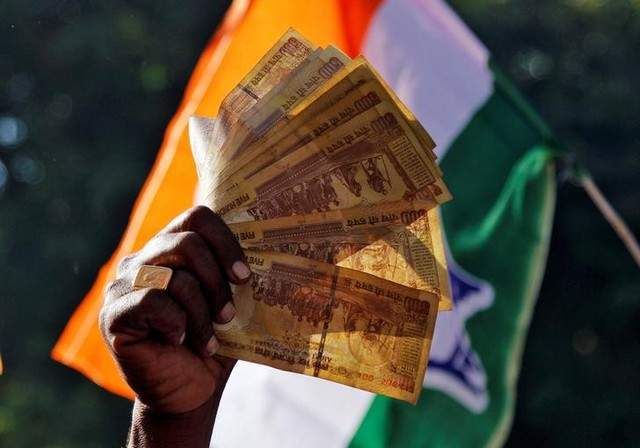 There is a need for transparency in campaign financing to curb the problem of black money. Credit: Reuters

The process of black money generation begins from politics. To be precise, it begins in the process of electing members of parliament and legislators (MLAs), the numbers for which have been frozen since 1971 and will remain so till the 2031 Census. Meanwhile, the population of the country has gone up manifold and will increase further over the next 15 years.

An unchanged number of seats and a growing electorate mean that each candidate now has to woo a larger number of voters. For instance, in 1971, the major Lok Sabha constituencies had a little over one lakh voters. Now many Lok Sabha seats have around 20 lakh electors.

It is obvious that a candidate has to now spend at least 20 times more than what he had to in 1971. Considering the inflation over the past 45 years that has led to the decline of the rupee in nominal terms, the spending will be more than 20 times. At the same time, the spending limit fixed by the Election Commission of India has increased, however, not sufficiently so.

Just before the 2014 general elections, the spending limit for Lok Sabha candidates in bigger states like Maharashtra, Madhya Pradesh, Tamil Nadu and West Bengal was raised to Rs 70 lakhs from Rs 40 lakhs in the previous election.

In the smaller states, like those in the Northeast, the spending limit was raised to Rs 54 lakhs from Rs 32 lakhs. On paper, this would appear to be a sizeable increase, but considering the real estimated spending by candidates who are earnestly contesting for the polls, this appears to be a small amount.

In many states, like Andhra Pradesh, on average a Lok Sabha candidate spent a staggering Rs 50 crore. Admittedly, in the not-so-prosperous states like West Bengal, candidates spent a substantially lower amount. However, in several instances, it was more than the stipulated Rs 70 lakhs.

In many parts of the country, the candidates had to pay huge amounts – sometimes up to Rs 5 crore – to party bosses upfront in order to get a party ticket.

“All this leads to a huge generation of black money. There has to transparency in campaign financing,” says Jagdeep Chhokar, founder of Association for Democratic Reforms and the former Dean of Indian Institute of Management, Ahmedabad.

However, more than this, there is a need to revisit the legal provision that freezes the number of seats at the 1971 level. If, say, the number of Lok Sabha seats – and correspondingly, the assembly seats too – are trebled to 1,629, this would lead to smaller constituencies having one-third the number of voters. This would drastically reduce the money required by each candidate to reach out to the voters. Also, by affecting the supply side – by increasing the number of seats – more aspirant candidates can be accommodated in the race. Thus, to that extent, party bosses would have less leverage over potential candidates and their ability to extract money from the latter.

With smaller seats that require less money, many honest candidates – who are presently deterred by the huge amount of cash required – can become part of election politics and lend the profession some luster. The quality of representation will also improve because there will be more MPs (and legislators).

In the present circumstances, a candidate who has spent crores to get elected very naturally wants to recover his spending. Thus, from day one, his effort to recover his investments through means like influence peddling in things such awarding contracts to parties who pay him, kickbacks.

This is where corruption takes a quantum leap and adds to the generation of black money.

“We are not like government officers who stay in power a lifetime. We have to face the electorate every five years and spend huge amounts without any guarantee that we will win. Can you blame us for encouraging corruption?” asked an MP from a North Indian state who declined to be named.

So why does Prime Minister Narendra Modi, who says he is keen on eliminating black money, not ring the bell instead of implementing dubious measures like the demonetisation of Rs 500 and Rs 1000 notes? This is a question that only Modi can answer.

However, as a class, politicians are unwilling to bring about changes. This is not difficult to fathom. As a class, politicians have successfully negotiated the terrain and have survived in the profession. Thus, being the ‘haves,’ why should they plump for a change in the rules of the game? It is only the ‘have nots,’ like political reformers and common men who genuinely want a change.

The number of seats increased due to the increase in population, but this would not have been a problem if the increase was shared proportionately across all states. But this was not the case. States where the population increased more, got more seats. The losers seemed to be the South Indian states like Madras (now Tamil Nadu) and Andhra Pradesh. In both states, the number of Lok Sabha seats actually reduced. Alarmed, Murasoli Maran of the Dravida Munnetra Kazhagam moved a private member’s Bill seeking a freeze in the seats in the Lok Sabha arguing that states like his were being penalised for successfully implementing the population control programme.

When 2001 approached, there was a bit of panic in political circles. Politicians realised that a Pandora’s box would be opened if the population increase of three decades had to be given effect at one go. This could lead to more imbalances in Lok Sabha seats between states.

Tamil Nadu pressed the panic button and the state assembly passed a unanimous resolution that the number of seats in Lok Sabha and assemblies be frozen for another 50 years till 2051. In the end, the Lok Sabha extended the freeze by another 25 years saying that the de-freeze will happen after the results of the first Census after 2026 is known. This would be in 2031.

Thus by extending the freeze, the politicians gave a new lease of life to corruption and black money.

Kingshuk Nag is the former resident editor of  The Times of India in Ahmedabad. He is the author of several books, including The NaMo Story: A Political Life.