Withdraw all Taxes, Says Organisation That Claims to Have Come up with Demonetisation Idea

Government will also do away with all high denomination notes eventually, the outfit claims 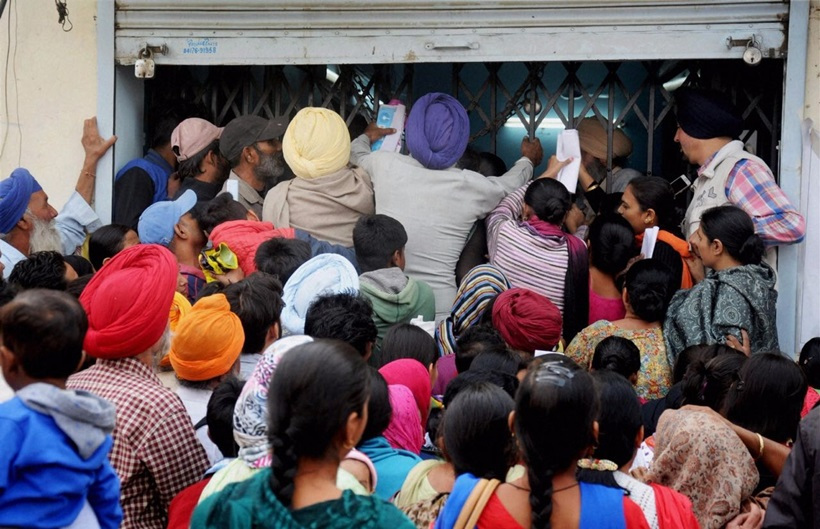 Customers outside an SBI branch in Amritsar after the announcement of the demonetisation of Rs 500 and Rs 1000 notes. Credit: PTI

If the government had fully implemented a five-point plan for completely overhauling India’s monetary and taxation system, the common citizen would not have gone through these hardships. “But,” says Arun Bokil, a Pune-based chartered accountant, “they didn’t, and we can see the results. However, the government should not be blamed for these problems.”

Bokil is the founder of Arthakranti (economic revolution) which calls itself a tax research organisation and which claims to be the brains behind the government’s demonetisation of 500 rupee and 1000 rupee notes. The organisation’s website declares, “aao milkar desh sanvare” (let’s all join hands to make this country prosper). “Today our country is facing multitude complex problems, impacting each one of us our families. The origin of these problems lies in the flawed monetary system.”

Bokil says he had made a presentation to Narendra Modi in 2013 when he was the chief minister of Gujarat. Claiming that the organisation is ‘politically neutral’, its officials say they had also met Rahul Gandhi “hardly gave us nine seconds for presentation. Nitin Gadkari who was shown presentation in 2003 appreciated the proposals but expressed his inability to implement at BJP was not in power then. It was Narendra Modi who took keen interest. In December 2013, we were given nine minutes for presentation. But it got extended to two hours as Modi got interested. Since then we have been in touch with his team. And since he has become PM, we have been in touch with the PMO with our proposals.” There has been no official word whether the PMO took Arthakranti’s proposals into account before the prime minister made the shock announcement of demonetisation. Arthakranti officials also refused to answer questions on whether the government or the PMO had acknowledged their meetings or their inputs.

The presentation included five proposals and the organisation was convinced that its ‘scientific proposals” would completely transform the current Indian socio-economic scenario and control black money, corruption and inflation.

Yamalji Malkar, a member of the organisation, says, “Apart from income tax, Indian have to also pay indirect taxes on almost all commodities from match boxes to clothes. Thus everybody including the poor pays taxes. With the abolition of all existing taxes as proposed by Arthakranti and implementation of BTT, the burden of taxes on Indians will reduce to just 10%.”

Citizens at large will benefit, Arthakranti says. With the abolition of taxes, prices of commodities will go down. For example, the price of diesel will go down to Rs 47 from Rs 60, according to Arthkranti’s estimates. Taxes will be turned over to banks on credit automatically and hence people won’t even have fill forms either.

Banks will get liquidity and this will decrease interest rates to below 10%, they claim. The State Bank of India, which has received huge deposits after the scrapping of Rs 500 and Rs 1000 notes has already announced an interest rate cut.

But what about the difficulties being faced by the people after the demonetisation? Arthakranti says these are temporary problems and the country at large will benefit from the move. They are happy with the government’s move and think more steps are in the offing.

Amol Phalke, also a member of the organisation, predicts that the new notes of Rs 500 and Rs 2000 which the government has issued are a temporary measure. “You will see the government will do away with high denomination notes completely.”