With the RCEP Pact Now Done, How Successful Is the Final Version in Achieving Its Goals?

Although ASEAN members decided to forge the regional partnership with a view to establishing 'ASEAN centrality,' the agreement over RCEP could well cement the central role of China in this region. 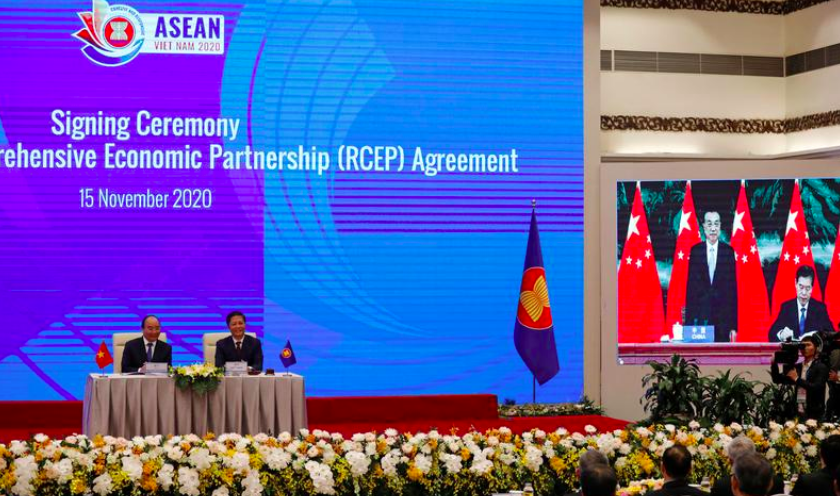 After eight years of negotiations, 15 East Asian countries have agreed to forge the Regional Comprehensive Economic Partnership (RCEP), in a move that marked the culmination of the process initiated by the members of the Association of the South East Asian Nations (ASEAN) in 2012.

These countries had adopted a resolution during the 19th ASEAN Summit “to establish an ASEAN-led process by setting out principles” that would allow ASEAN members to “engage interested ASEAN FTA partners in establishing a regional comprehensive economic partnership agreement”.

While resolving to establish the RCEP, ASEAN members sought to realise two sets of objectives. The first was to effect a consolidation of the ASEAN+1 FTAs that would buttress economic integration in the region through greater coherence in the rules governing cross-border flows of trade and investment, and secondly, “maintain the centrality and proactive role of ASEAN as the primary driving force in its relations and cooperation with its external partners”.

RCEP is the largest free trade agreement (FTA) ever to be established.

In 2019, RCEP members accounted for nearly 30% of the global output and population, and nearly 28% of global trade in 2019, and coupled with the fact that the region has some of the most resilient economies, this FTA could well emerge as the driver of the global economy in the post-COVID-19 world.

India got close to endorsing the RCEP exactly a year ago, but had withdrawn from the negotiations since, in its view, the deal was not taking cognisance of India’s concerns. India was principally worried about the agreement among the RCEP members to effect, not only deep cuts in tariffs, but to also eliminate tariffs on more than 90% of the products.

Many observers have argued that RCEP will not bring about comprehensive economic integration in the East Asian region, arguing that this agreement is “shallow”.

This view stems from the comparison of RCEP with the Trans Pacific Partnership (TPP), the FTA that was backed by the United States until the Trump Administration abandoned it. The TPP was touted as setting the “gold standard” in the FTAs and it included several regulatory issues including the controversial labour and environmental standards that was largely seen as the new forms of trade restrictions. The TPP also included issues such as Regulatory Coherence and Transparency and Anti-Corruption, which could also be used to “manage” trade.

In contrast, the RCEP includes issues that are either included in the covered agreements of the World Trade Organization (WTO), or are being discussed by several groups of members as a part of what they see as the agenda for “reforming” the multilateral trading system. Included in the latter set of issues are disciplines on electronic commerce, investment facilitation that seems to be the first step towards a multilateral agreement on investment and creating an enabling environment for the participation of small and medium enterprises in global trade.

Like most recently negotiated FTAs, RCEP negotiations had the overarching objectives of liberalisation of goods and services trade and investment flows. Thus, “Guiding Principles and Objectives” of RCEP negotiations spoke of “progressively eliminating tariff and non-tariff barriers on substantially all trade in goods” and achieving “high level of tariff liberalisation, through building upon the existing liberalisation levels between RCEP participating countries and through tariff elimination on a high percentage of both tariff lines and trade value”.

A further objective was that “tariff commitments should seek to maximize the benefits of regional economic integration”. With respect to trade in services between the RCEP participating countries, the “Guiding Principles and Objectives” spoke of liberalisation of services trade between RCEP participating countries through a comprehensive and high quality agreement that would “substantially eliminate restrictions and/or discriminatory measures”. And, finally, RCEP negotiations on a framework for investment was intended “to cover the four pillars of promotion, protection, facilitation and liberalisation”.

It was, therefore, quite clear that the RCEP participating countries had given themselves an ambitious agenda of trade and investment liberalisation. 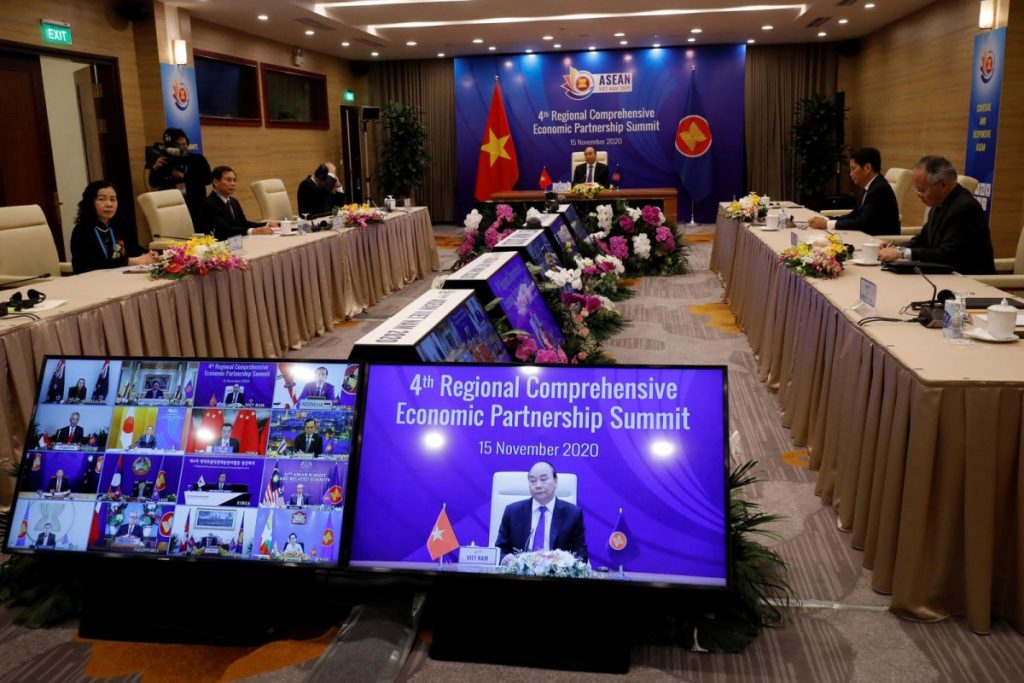 How far do the final set of commitments of RCEP participating countries reflect their ambitions?

In the area of goods, tariff cuts committed by the RCEP members are very deep in most cases. Take, for example, the case of China. The simple average of import tariffs of China in 2014, accepted as the base year for tariff reduction by RCEP members, was 9.4%, which would be lowered to 1.2% by the 10th year of implementation of the agreement for Australia and all ASEAN member states. Further, by the 10th year, about 90% of the products that China would import from these two RCEP members would attract tariffs of 5% on less, while less than 4% of the products figure in the exclusion list.

Vietnam has made a similar set of commitments in its offers to China, reducing the average tariffs from 10%  in 2014 to 2% by the 10th year, and eliminating tariffs on nearly 90% of the products imported from China. Vietnam does not have a list of products excluded from tariff cuts; it has a small list of 30 products covered by tariff rate quotas, which will enable the country to import a fixed quantity of these products at lower import tariffs, while imports exceeding this quantity would attract higher import tariffs.

Also read: Invoking Mahatma Gandhi to Stay out of RCEP Is a Lazy Act

Among the major economies in the region, Malaysia has among the lowest levels of protection and this will be reduced further as it implements its commitments under RCEP. As many as 86 products, or less than 1% of its traded products are in the exclusion list.

In contrast to the market access commitments under goods, the commitments in respect of services trade liberalisation under RCEP does look shallow in terms of the coverage of the sectors. Movement of natural persons, an area in which India had had considerable interest, is considerably restricted as RCEP members have allowed relatively limited market access only to individuals in managerial positions or those having high levels of skills.

In many ways the RCEP Agreement remains a work-in-progress as is evident from the text on investment rules. The dispute settlement procedures are yet to be written in, and therefore it will be interesting to see whether the controversial investor-state-dispute-settlement (ISDS) mechanism becomes a part of the agreement, to which India had voiced its opposition during the negotiations.

Ever since India had walked away from the negotiating table, several RCEP members have spoken of their desire to get India re-engaged.

These efforts have now become “official” as prior to the signing of the deal, RCEP Ministers adopted a Declaration on India’s participation in the agreement, through which the door has been left open to India to join RCEP Agreement as an original signatory.

Further, India has been invited to participate in RCEP meetings as an observer and in economic cooperation activities undertaken by the RCEP members. The question is, have the circumstances under which India had distanced itself from the RCEP negotiations become any better for India to join the agreement anytime soon? The answer seems to be clearly in the negative as the concerns that India had raised, especially about the deep cuts in tariffs for imports from China, have become even more important over the past several months.

Finally, it is important to understand the significance of RCEP in terms of the political economy of trade policy. First, RCEP seems to be the definitive statement that could change the narrative on decoupling from China. Although the ASEAN members had taken the initiative to forge the regional partnership with a view to establishing “ASEAN centrality”, the agreement over RCEP could well cement the central role of China in this region. RCEP has also made it clear that although many of the signatory states have serious political differences with China, they are willing to strengthen their economic engagements with the world’s second largest economy.

Biswajit Dhar is a professor at the Centre for Economic Studies and Planning, Jawaharlal Nehru University.