Will a New Vice-Chairman Mean a New NITI Aayog?

The success of Rajiv Kumar's tenure, who has moved from the left of the ideological spectrum to the right, will depend whether he succeeds in moving the Aayog away from being a government mouthpiece and creating a shared narrative around job creation.

The new vice-chairman designate of the NITI Aayog has much to prove. Credit: Reuters/Reuters/Twitter 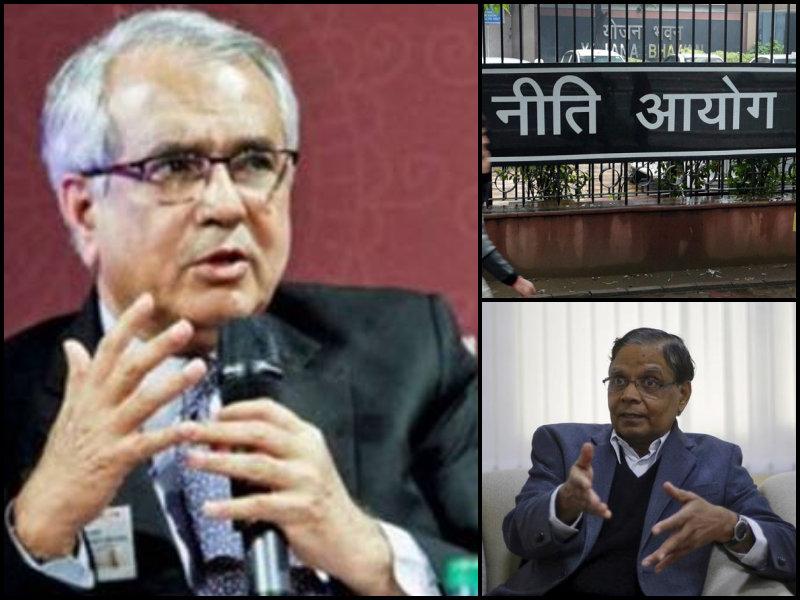 The new vice-chairman of the NITI Aayog has much to prove. Credit: Twitter/Reuters/Reuters

Two and a half years ago, the NITI Aayog replaced the Planning Commission in what could be called a vengeful manner. In the same two-and-a-half-year period, the think tank’s vice chairman (VC) has now been replaced. Whatever may have been the reasons behind the former VC’s exit, the fact is that the NITI Aayog will continue to be watched closely not just by policy observers but also by its boss – the prime minister.

After all, it is the success of the NITI Aayog’s performance upon which rests the credibility of the prime minister’s decision to create this new body as a better substitute to the 65-year-old Planning Commission.

Therefore, the vice-chairman designate of the NITI Aayog, Rajiv Kumar, has much to prove. He has also much to establish for the reputation of Aayog as a body that is truly engaged in constructive policy advisory focussing on implementation rather than a body that acts like a mouthpiece of the government.

Given the fact that there is a strong PMO and a powerful swadeshi lobby, Kumar’s position is not an enviable one but an important one nonetheless. Kumar is not only a man who has moved from left of the ideological spectrum to the right but is also an economist with a well-rounded perspective acquired from vast experience in the government, industry and various think tanks. He is also an insider to the policy landscape in India having authored two books that have helped guide policymaking since 2014. These attributes should surely equip him to hit the ground running.

But his real test will lie in how skilled a ‘funambulist’ he will be as he balances the expectations from the PMO, work with other members of the think tank like fellow economists Bibek Debroy and Ramesh Chand, manage complex interest of states and deal with pressures from the swadeshi lobby while pursuing reforms and transformatory ideas for India.

A lot will depend on what he chooses to pick as priority for the NITI Aayog’s three-year work agenda and get everyone’s support. His thinking on creating jobs vs tom-tomming growth as a matter of national economic priority could well be the winning card. It is surely not an either/or situation but the thrust on job creation is central to our poverty eradication agenda, particularly to cater to a rising youth population. In order to do that, which is not an easy task, he would need to focus on an agenda which can capture the imagination of the polity.

During the Planning Commission days, it was easy for the commission to push an idea down the aisle as it had the control over funds and hence over an agenda. For the NITI Aayog, the most workable option to wield similar influence is through developing a shared narrative. Because a shared narrative evolves out of shared concerns. Collaborative action is possible in this case – and what bigger shared concern is there in India than job creation?

Kumar in the past has rightly advocated that government should focus on job creation and let us add, creating job creators. He can set this goal as an ultimate indicator of inclusive and sustainable growth and start to rekindle life in the charter of NITI Aayog to meet this goal. For instance, he should focus on strengthening data gathering and analysis for better policy designs. He should revive independent monitoring and evaluation which can offer unalloyed insights. He should realign focus on key building blocks of human capital – health and education, which are key to economic growth and job creation.

Health, a bit too late?

By appointing Vinod Paul as a new member of the think tank, government has indeed shown its seriousness about health outcomes but such decisions cannot come so late in the day.

Paul’s appointment also opens up another discussion which for some reason has not happened at all. It relates to the composition of the Aayog. the NITI Aayog’s VC and four other expert members are tasked with liaison with 29 states and seven UTs across a huge bandwidth. There is a need to expand the membership of NITI to ensure balanced work division on focussed areas. Why is that we suddenly needed a health expert but not an education expert or a competition expert?

This shows that someone would need to take a detailed view of who is needed to ensure that the ultimate goal is brought to fruition. As an operational head, the VC should take this call. There are several ‘national assets’ like Nandan Nilekani who enjoy bipartisan support whose services could be brought in a suitable position to deal with niche areas at the Aayog, which have a bearing on its larger vision.

With a change of guard there is also an opportunity to revisit the performance of NITI Aayog vis-à-vis its functions. One of the envisaged goals of the NITI Aayog was also to develop mechanisms to formulate credible plans at the village level and aggregate these progressively at the higher level. Very little of this cherished goal, which is also embedded in the constitution, has indeed been accomplished. States are responsible and need to be nudged by the NITI Aayog.

Similarly, the think tank need not reinvent policy recommendations, especially in areas where years of work has already been done. It should instead invite, through expert members, research inputs on identified areas and should synthesise recommendations based on empirical weight of the research. This will cut time, cost and effort and will increase timely policy inputs for the government.

Amongst others functions, the NITI Aayog is also supposed to carry out innovative improvements in policies and programmes based on feedback received from monitoring. Read carefully, this function actually empowers the Aayog to disagree with policy designs which may have gotten prior endorsements from powerful lobbies in the government. This is one of reasons that we advocate independent monitoring and evaluation.

A list of dos (and don’ts) for the NITI Aayog could be long and much will depend on the leadership of the new VC. However, the institution will do well if some of the ideas are already strewn on the table when the new VC assumes office. In addition to the above, it should also include ideas to streamline regulatory governance by ensuring competition and regulatory impact assessment to identify superior alternatives and using structured transformative change making methodology to affect credible change across range of issues and sectors.

And above all, for better implementation we sorely need administrative reforms to create accountability, which has been said ad nauseam and fortunately, the prime minister is well seized of this matter.